Just in case you were worried about Logan Couture's lack of goal scoring: Stop. You should not be. What's wrong with you?

Logan Couture played a phenomenal game against the Wild Thursday night. He took eight shots, blocked a shot and spent more time on the penalty kill than any other forward on the team. For his efforts he was rewarded with no goals and a puck to the head courtesy of Marc-Edouard Vlasic. It was not a great night at the office. Oh, and according to Randy Hahn, Couture ended up getting six stitches.

The puck to the head aside, last night's game embodied what we have become accustomed to from the Canadian center. Couture is ranked sixth in the NHL in shots, finding himself behind just Alex Ovechkin, Phil Kessel, Zach Parise, Patrick Sharp and Corey Perry. That's esteemed company. But for all his trouble, Couture only has 10 goals -- 42nd in the league.

Clearly this means Couture has a soft shot and should try to get to better scoring areas if he's going to be such a shot hog. God, would he just LEAVE some shots for SOMEONE ELSE!? Oh, no, right, he's a good Ontario boy so none of us have been forced to listen to that diatribe thus far. Couture's shooting percentage is the lowest it has been in his entire career: 8 percent.

Couture's career shooting percentage is around the 12 percent mark. He shot 13.9 percent last year and 12.7 the year before that. The word regression to the mean is something bandied out a bunch in statistical analysis, and it almost always revolves around something negative. See: The Toronto Maple Leafs. But where the Leafs were destined to come back to Earth, Couture will almost surely starting getting a few pucks to bounce his way.

Drew Remenda says a lot of silly, boring hockey memes during Sharks broadcasts. The popular Couture meme has been about "finding consistency." Let's dive into that game log to see how his consistency has been this season. 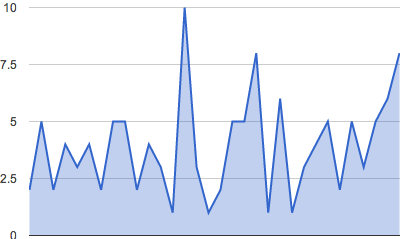 From a game-to-game basis you're going to see those numbers jump and down a bit, but there is no prolonged peak or valley that I can decipher from this chart. Unsurprisingly to most fans, Couture consistently throws pucks at the net and is routinely one of the best players on the ice. He's an incredible hockey player and at only 24 years old is one of the reasons to believe in this team despite their "aging core."

So about that bad luck: the only concern (in my mind) would be a player getting inside his own head and opting to pass the puck when he should shoot it. Most NHL players don't have this problem, because if they lacked confidence they probably would not be able to play hockey at its highest level. You can see based on the chart above that Couture has seen no shot drop off despite not scoring on his last 27 shots. Based on his career average, Couture should have three goals in the last five games -- instead, well, snakebit.

While fretting about goalless streaks is usually a waste of time, in Couture's case, it's uh, well, an even bigger waste of time. But seriously, someone's going to need to get the dude a serum to cure all this snake venom he has picked up this season.