Sharks Among but not Controlling the NHL's Elite

The Sharks continue to be a team that performs very well against almost all teams in the NHL, except for the elite.

Share All sharing options for: Sharks Among but not Controlling the NHL's Elite

A couple of years ago I decided to break apart the team's performance by their opponent's strength. The objective was to get a better understanding of how the Sharks performed against playoff caliber teams. While it's nice to continue to rack up points against teams that the Sharks should beat, it's their performance in the 2nd season that matters. For the Sharks organization and many fans regular season success is hallow. Each year the team is (although probably unfairly) judged by its post-season success or failure.

What might strike you as one of the most consistent Sharks team in both scoring and possession (but not injuries) might lead you to believe that this years team is different. Maybe it's the younger players like Braun, Nieto, or Hertl stepping into a role. Or the continued (slow) progress of MEV. A quick glance through some of the now plethora of adv. stat sites validates the eye-balls. Their Fenwick% is up, and their Shooting% is up as well.

Let's again delve a little deeper into those predictive measures of winning to try to get look at how the sharks are playing against the truly elite.

I compiled game-by-game 5v5 score close data from extraskater.com. I then used a shitload of "=sumifs" and "=countifs" to group the data by opponent ranked Fenwick For% and the categories of interest (eg. goals, shots, fenwick, corsi).

Table 1. This is a table of how the Sharks have performed against each of the teams listed in the rows. The raw data if you will.

Figure 1. Time spent 5v5 with the score close (within a goal in the first and second, tied in the third) by opponent Fenwick% rank. 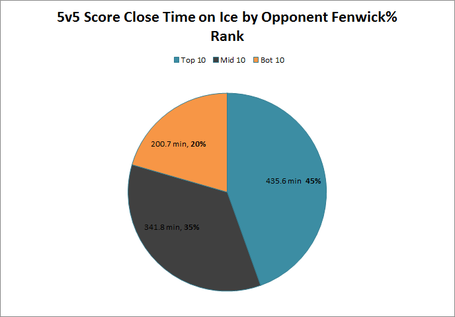 Table 2. The Sharks performance (Corsi, Fenwick, and Shots on goal) split by fenwick% rank of the opponents.

There is a consistent downward trend as the Sharks play better teams. If we micro-analyze the 2 tables we can say that the Sharks have gained a few more points from the basement dwellers than in years previous and performed worse against the NHL's elite. But they have performed slightly better against the "Top 10" and "Mid 10" groupings than previous.

The Sharks performance against the "Top 10" is encouraging, as those teams are truly playoff caliber. The change from the 2011-2012 season (I haven't looked at last year) shows improvement, a change from about a 49% fenwick team to a 51%. 2% isn't a huge deal in the long run, but in such a tight league, 2% can make a difference. As it stands right now, that approximates the difference between teams such as the Jets, Coyotes, Predators and the Wild, Ducks, and Red Wings.

The lack of success in the deeper rounds of the playoffs continues to be the Sharks albatross. Again we see a trend that shows the Sharks struggling against the NHL's elite. They've played a decent, but not huge amount of time against the NHL's top 5, and have largely been buried outside of the St. Louis Blues. Playing approximately 90% of that (5v5 score close) time on the road probably complicates things, and it will be interesting to look at this year end to see if things tightened up at home.

Although it's great to conjecture about these numbers, I have't conducted a full study to see if there is actually any utility in breaking down the numbers this way. Common sense would suggest that teams that play well against playoff caliber teams are more likely to advance in the playoffs, but I would think that's far from a given.