Sharks vs. Blackhawks: Where do the Sharks stand at the quarter pole?

With a quarter of the season (okay, 27.1%) over, we try to make out what the Sharks' bizarrely bipolar 2013 means and how they stack up against the rest of the West. Oh, and there's a huge game against the Blackhawks tonight too.

Share All sharing options for: Sharks vs. Blackhawks: Where do the Sharks stand at the quarter pole?

After an impeccable start to their season, the Sharks have dropped six straight and, if you'll pardon the tired metaphor, look dead in the water. Except that isn't really true, is it? Thanks to the NHL's unnecessarily convoluted standings system, San Jose is technically 7-3-3 which sounds a whole lot better than what they really are, 7-6. But courtesy the loser points accumulated via shootout and overtime losses, the Sharks are still 5th in the Western Conference and just two points out of first place in the division.

Honestly, the standings fail to provide an accurate portrayal of where the Sharks stand a quarter of the way into this truncated season or how they'll likely fare going forward. We've repeated this ad nauseam over the past few days but the Sharks were never as good as their 7-0-0 start indicated and they haven't been nearly as bad as this recent six-game winless streak would imply. As Mike described in his post, it's largely a mystery as to who the real 2013 San Jose Sharks are; neither the euphoric bliss of their perfect opening nor the staggering lows of their extended losing streak seem to provide any real insight when taken separately.

So let's combine them and look for trends. In many ways, this latest string of losses was an inevitability. When the wins were piling up for the Sharks, Patrick Marleau was scoring on literally every other shot he took, the top line as a whole was generating around three goals per game, Logan Couture and Martin Havlat were posting dominant scoring numbers and Antti Niemi simply wasn't allowing goals at even-strength. San Jose's PDO, the addition of their even-strength shooting and save percentages, was sky-high. In the long run, teams tend to be unable to sustain PDOs that deviate significantly from the league mean. To a large extent, the Sharks' recent struggles have been the result of regression: 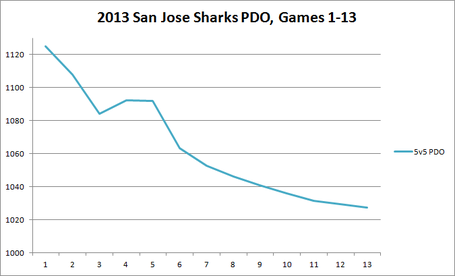 The team-to-team spread in PDO will probably be around three times greater in this shortened season but last year, no team in the league finished their schedule with more than a 1014. The Sharks' even-strength PDO currently stands at 1027, meaning they likely aren't finished regressing. So is that reason to panic? I'm not so sure. The import of San Jose's PDO cratering from unsustainable highs has essentially been that the Sharks have gone from blowing teams out of the water to being involved in tight-checking, one-goal contests. The reason for this is that their underlying ability to control play has actually improved quite a bit since the first week of the season. Here's a look at the Sharks' possession numbers relative to the rest of the West in even-strength situations where the score has been "close" (tied at any time or within a goal in the first or second period), thereby ignoring swaths of games in which a team is substantially trailing and thereby nearly guaranteed to outshoot the opposition.

Even-strength data with the score close

It's only been a quarter of the season but the Sharks look dominant by one of the most predictive metrics available, Fenwick Close. They've certainly benefited from Niemi being super awesome at even-strength with the score close but even when that save percentage falls back down to earth, the Sharks have some very impressive possession numbers to rely on. Looking at the rest of the West, it's also clear that the Kings are still the kings despite a horrendous start for Jonathan Quick. They should make the playoffs and it probably isn't entirely out of the question that they win the Cup as an eighth seed for the second year in a row which would be just perfect. On the flip side, the Ducks are likely in for a tumble at some point in the near future. They aren't going to keep breaking games open by scoring on 15% of their shots in close situations.

None of this is to suggest that there aren't real issues with the Sharks. The top line has been M.I.A. to the greatest extent in recent memory over the past two weeks, the coaching staff has made some questionable lineup decisions and despite the third line turning things around territorially, forward depth remains a problem. Not to mention that the power play has gone ice-cold as of late. But what's really happened is that the team has gone from blowing out sub-par and injury-riddled opponents to being embroiled in a series of close games, which are essentially coinflips these days in the NHL which become quite literal coinflips once they progress to the shootout. Ignore Columbus Ugly and Kane's empty-netter the last time the Sharks and Hawks met and San Jose has played exclusively one-goal contests since the first week of the season. Those aren't always going to go your way, usually for reasons not entirely within a team's control. Once the Sharks weather the storm of regression, they should settle into being the team they really are: probably not the best team in the NHL their undefeated start indicated but most certainly a Cup contender.