There was a palpable tremor in the Force on Tuesday as Michal Handzus made good hockey plays that led to a great hockey goal. We break down the veteran center's first marker of 2013.

This may come as a shock to some of you, but I'm not the biggest fan of Michal Handzus. That has nothing to do with Handzus as a person and everything to do with his career in San Jose to this point. I'm sure he's a perfectly nice guy to have the Slovakian equivalent of beer with (I'm guessing it's beer) but that doesn't change the fact that the Sharks have been thoroughly dominated with him on the ice at even-strength over the past season and change, despite Todd McLellan having reserved him almost exclusively for protected minutes.

But hockey is a notoriously unpredictable endeavor, one of the many things that makes it awesome. Truly anything can happen on any given night. Columbus can rout the Detroit Red Wings (with Jack Johnson playing 35 minutes, no less). Nick Bonino can score a hat trick against the defending champions. And Michal Handzus can look like he still belongs on an NHL team's third line. The latter occurred in stunning fashion Tuesday night at the Tank as the Sharks' newly formed third line of Handzus, James Sheppard and Tommy Wingels inexplicably had their way with the Chicago Blackhawks. Let's break down the sequence that led to Michal "Occasionally Competent NHL Forward" Handzus scoring his first goal of the season. Click on any of the frames to embiggen. 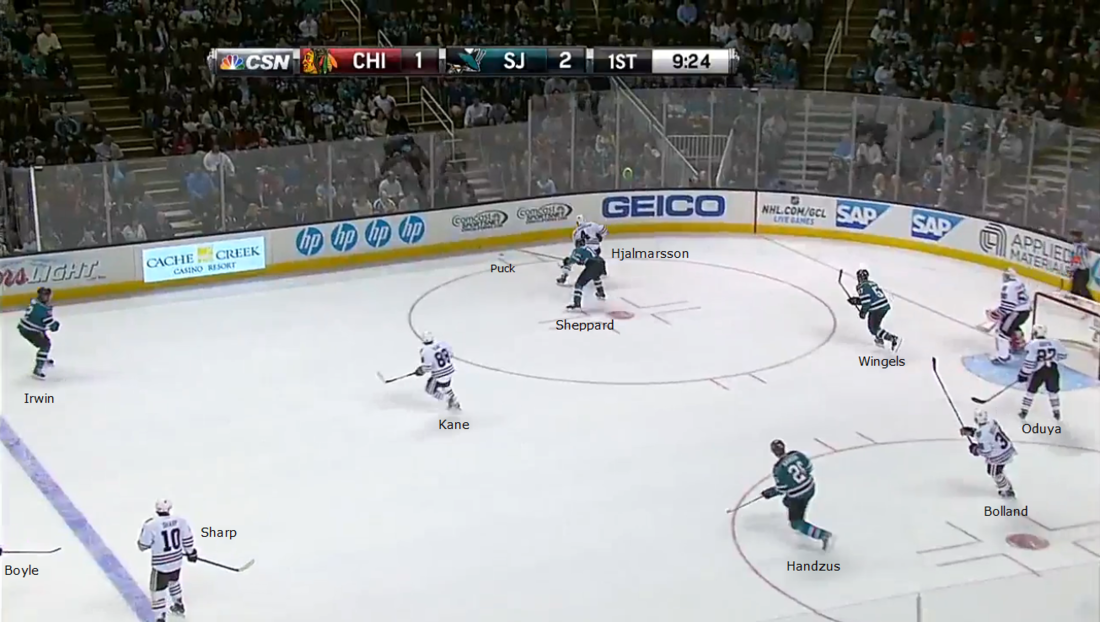 We'll pick it up near the conclusion of an extended offensive-zone possession by the Handzus line. Super Nintendo Hjalmarsson retrieves a loose puck on the far side with the intention of sending a breakout pass to either Patrick Kane or Sharp, who are circling high in the Blackhawks' zone. James Sheppard does a terrific job to apply forechecking pressure on Hjalmarsson. 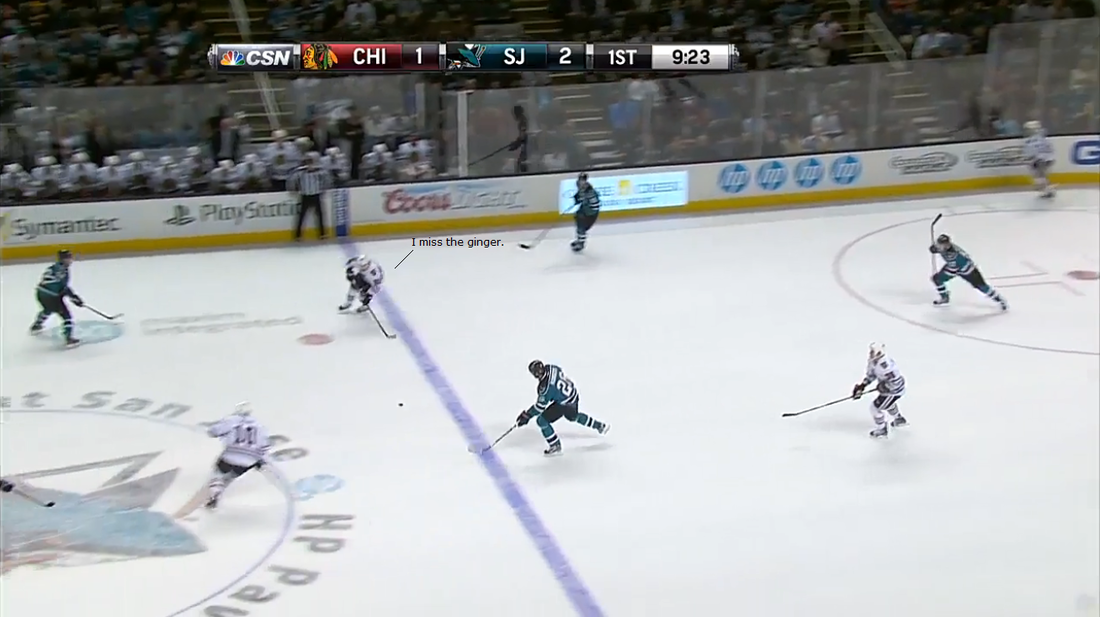 That forces the former Sharks offer sheet target to flip a weak and errant backhand pass into the neutral zone. Instead of hitting either Kane or Sharp's stick, the puck ends up smack dab in the middle of the two Hawks wingers. 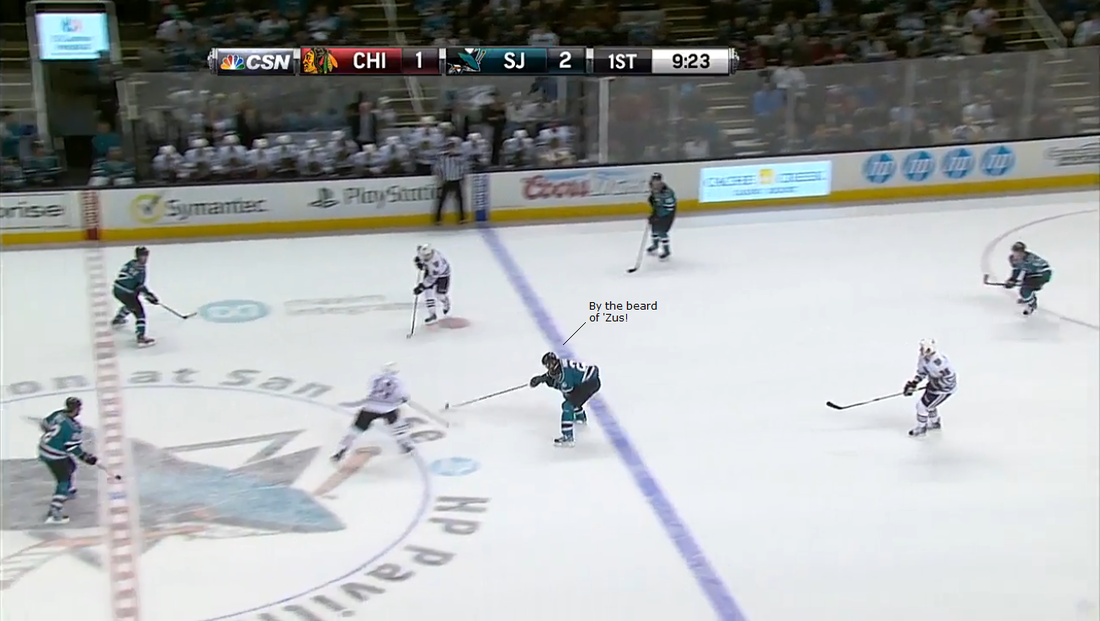 Handzus appears to have read the play perfectly, as far back as the first frame of this breakdown. He's in excellent position cutting back through the neutral zone to swat the loose puck away from Sharp's grasp before the Chicago forward has a chance to corral it and attempt a zone entry. 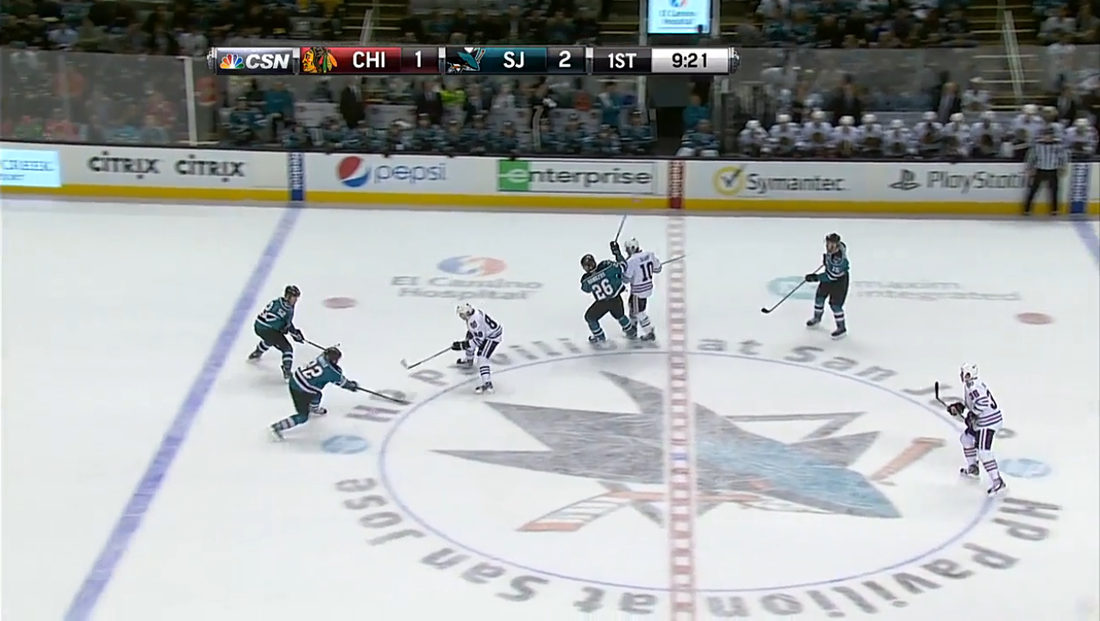 This is the second Good Hockey Thing™ done by Handzus on this play, as he stays with Sharp just in case Kane is able to retain possession of the bouncing puck and head into the Sharks' zone. As it turns out, Dan Boyle wins the Battle Of The Bounce and sends the puck past the center line to an onrushing Tommy Wingels. 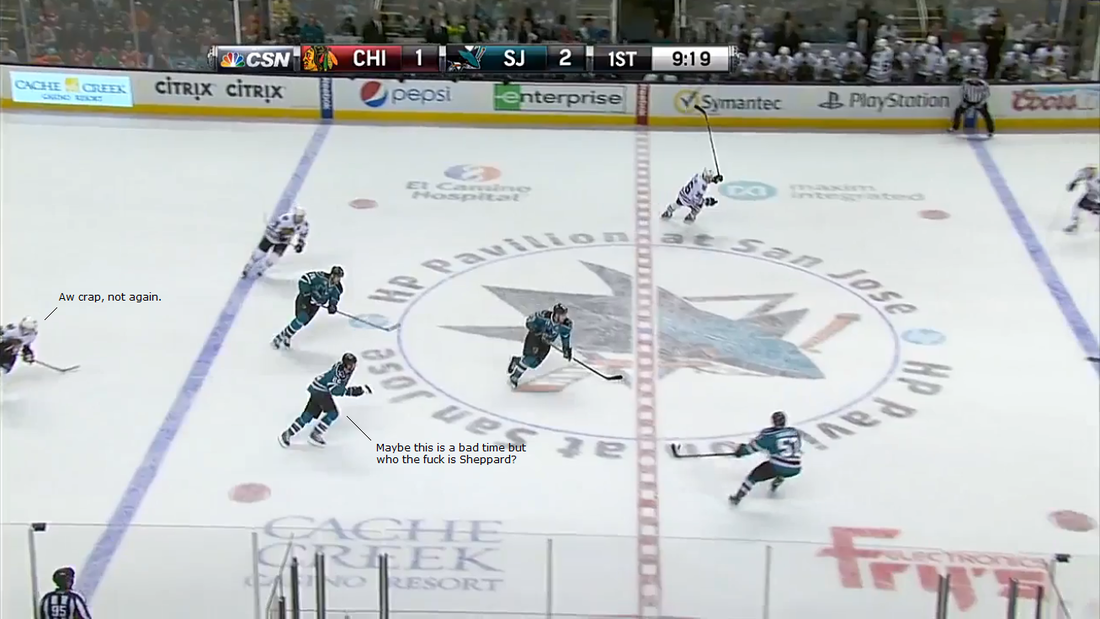 With Kane and Sharp now caught deep, things look mighty promising for the Sharks. They're about to have a 4-on-3 while gaining their attacking blueline, with only Dave Bolland along with defensemen Hjalmarsson and Johnny Oduya back for Chicago. The blueliners aren't visible in this frame but Sheppard does the right thing here by driving the middle lane, hoping to draw either Hawks d-man to him as he heads for the net. 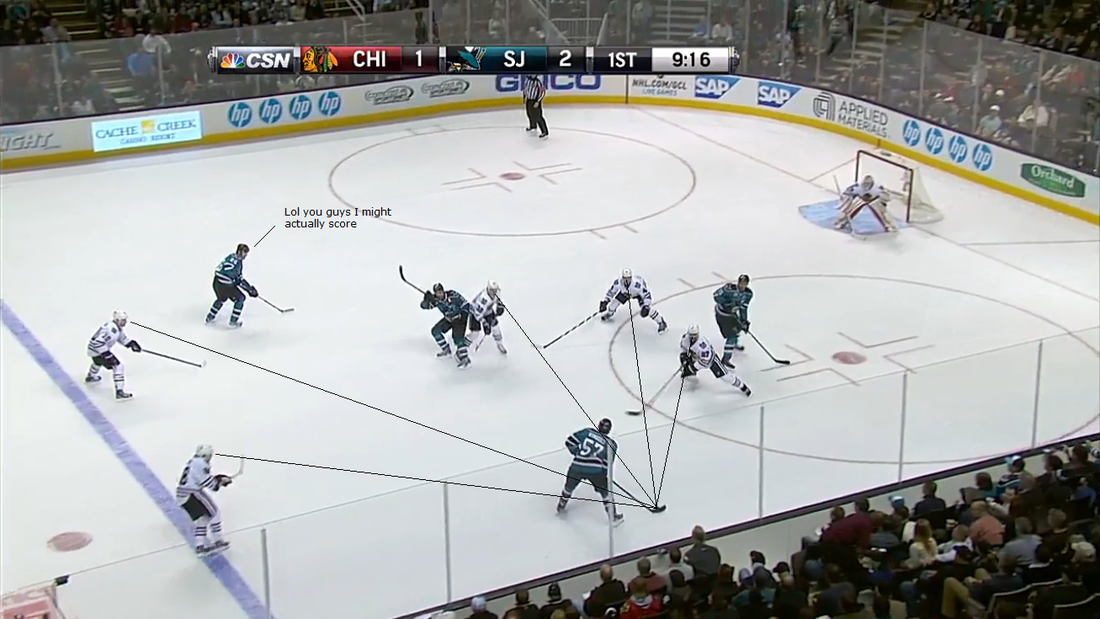 It doesn't end up mattering. Neither Hjalmarsson nor Oduya pays much attention to Sheppard but that isn't because they instead choose to attack the puck-carrier Wingels. I really have no idea what either of them is hoping to accomplish here. Oduya cedes a substantial gap to Wingels while Hjalmarsson appears to be guarding air and I don't even think I'm joking. It's impossible to gauge from a still frame but Hjalmarsson is wildly swinging his stick in the slot in an apparent attempt to close off a passing lane that has zero possibility of being used.

Of course the most significant collective mistake by Chicago here is that every single Blackhawks skater is mesmerized by the puck. I've even drawn incredibly helpful MS Paint sightlines to illustrate the point. None of the Hawks are even aware of the concept of Handzus, much less the fact that he's streaking down the middle of the ice. Well maybe streaking is a bit generous for someone of Handzus' skating, um, abilities but he's certainly moving in the direction of Corey Crawford until acted on by an external force. Also, note the not-so-subtle pick thrown by Boyle on Bolland to further open up that gaping passing lane from Wingels to 'Zus. 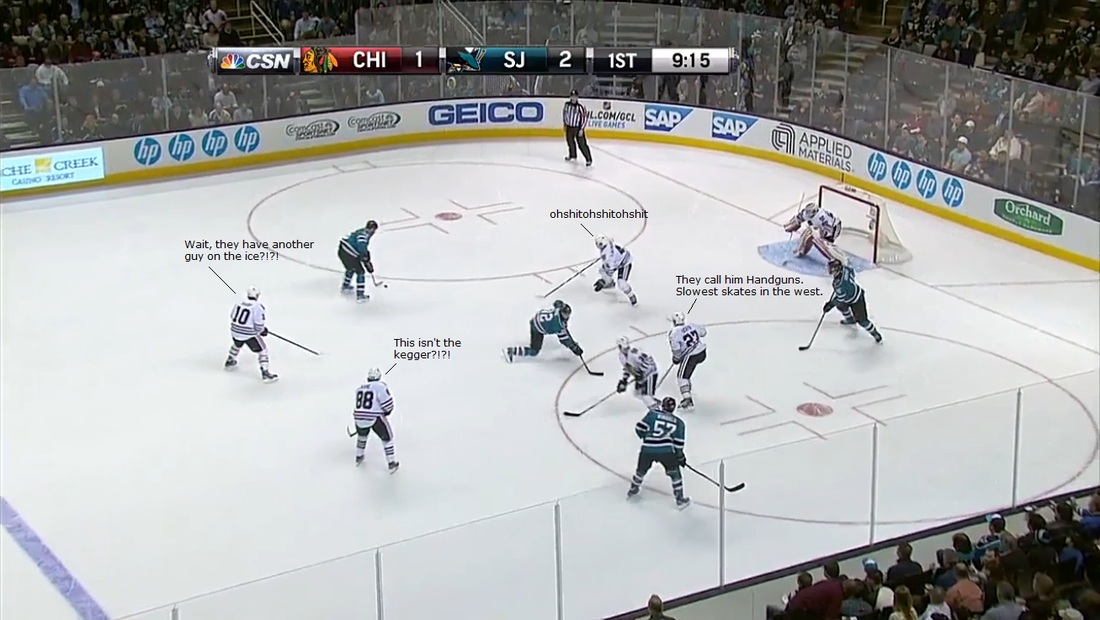 Wingels executes the pass flawlessly and the Hawks look absolutely bewildered to discover that Handzus is not only on the ice, but currently has the puck in a prime scoring area with tons of time and space. Hjalmarsson makes a last-ditch effort to prostrate in front of the ruler of Mount Olympus, begging to be absolved of his puck-watching sins. 'Zus pays no heed to his cries and snipes the puck high-blocker past Corey Crawford. 3-1 Sharks.

It's remarkable how every Shark on the ice, with the exception of Matt Irwin, plays a pivotal role in creating this tally. Sheppard's initial pressure on the forecheck forced a bad pass, Handzus' positioning and awareness in the neutral zone prevented either Blackhawks winger from recovering the puck, Boyle deftly directed a bouncing puck in Wingels' direction to initiate the rush and Wingels perfectly exploited the open passing lane to finally feed Handzus for the goal. The Sharks obviously went on to lose this game but if they somehow managed to craft an effective depth scoring line in the process, I'll take it.