Crash Course: Two more down, one to go

The Spartans came up with two more wins at home last weekend against UCLA. Now, with only Santa Rosa JC remaining on the schedule, its time to honor the Spartans seniors: Kyle Dutra and Christian De Jesus.

Share All sharing options for: Crash Course: Two more down, one to go

The #5 San Jose State Spartans (22-7-2) entered last weekend with the toughest part of their regular season behind them. Unfortunately for the UCLA Bruins, the Spartans did not look past them. San Jose State cruised to 10-2 and 14-2 victories.

Despite the high scores in both games, the play of Bruin goaltender Albert Ricciardeli couldn't have been more different. In Friday night's game, Ricciardeli was spectacular. He routinely made some huge stops, and held UCLA within three goals at the midway point of the game. But he had to eventually wear down. The Spartans did put up 81 shots, after all. The SJSU top line, in particular, was dominant. Kyle Dutra, Sam Cimino and Arthur Arias had 5 points each, including hat tricks for Dutra and Cimino. The Spartans finished the game with a 10-2 win, despite the UCLA goaltender's best efforts.

On Saturday, Ricciardeli started again, but did not look like the same goaltender. The Spartans scored early and often, following a 5-goal first period with a 7-goal second period. He was pulled, multiple times, after the Bruins back-up proved to fare no better against a potent Spartan offense. Unlike Friday, which was dominated by the top line, everyone seemed to get in on the fun on Saturday. The Spartans had eight different goal scorers, and thirteen players with multiple points. It was another game with dual hat tricks, this time with Ian Seidl joining Sam Cimino. The Spartans cruised to a 14-2 win, but were a bit more efficient, doing so on "only" 66 shots.

It was a pair of dominant games for SJSU, and a good show for the fans at Sharks Ice. But with the regular season winding down, only one home game remains before the Spartans leave for the playoffs - tonight versus Santa Rosa Junior College. And that means there's only one home game left in the careers for the Spartan seniors. At this time last season, senior night meant the last game for nine graduating Spartans. This time around, the team is only saying farewell to two: Kyle Dutra and Christian De Jesus.

No matter how much I write here, I don't think I could say enough about Kyle Dutra. If you were making a Mt. Rushmore for Spartan hockey, I think you'd need to put him on it. He will finish his career in the top five for goals, assists, points, and games played all-time for SJSU. But he brings more than just his offense. Kyle is also a skilled penalty killer, working well in any situation you put him in. The skill he has is amazing. I always feel bad for any opposing defenseman who tries to line up a hit, only to see #28 slide by untouched and rip a shot on goal. But, he's more than just skill, Kyle Dutra leads the team by example. He'll throw hits on guys almost twice his size, or lay out to block a shot in the final seconds of a blowout.

It's no wonder he's served as captain of the team for the last two and a half years. Dutra told me he just wanted to be remembered in his Spartan career as "someone that came out and worked hard every game" and someone who led the team to some great victories. In fact, his fondest memory of the team came from one of the Spartans greatest victories: It came from couple years ago, "going to Colorado, and beating Northern Colorado in overtime to go to Nationals," said Dutra.

The Spartan center currently stands at 99 career goals, and has a great chance to hit the century mark in tonight's game. But that's not the biggest goal on his mind. "I want to win a national championship," said Dutra. "That's really the one goal I have." 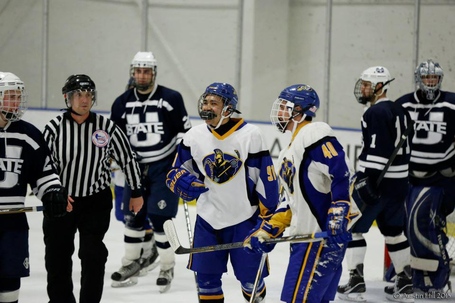 The other Spartan moving on from the team is Christian De Jesus (#91). After playing with SJSU's D3 squad last season, the 26 year old De Jesus made the team at tryouts this summer. "D2's a lot faster than D3," said De Jesus. "Definitely a lot faster, a lot more physical, and there's a lot more intensity throughout the games."

Despite the adjustments, Christian fit in well in short time. He had an assist in the first game of the year, and came up with a huge breakaway goal in a 6-4 win at USC early in the season. His speed has given the Spartans a dangerous depth scorer. Although primarily playing on the third line this season, he saw some time in the top six, and has been scoring above a point-per-game pace (12-22-34 in 31 games). Much like Kyle Dutra, De Jesus is also a fantastic penalty killer, and provided a lot of maturity to a team that had lost so many seniors in the previous season.

"I've enjoyed my time here. I wish I came on to the team a little earlier to get to know these guys a little more," but it's been "an honor to play for this team, and something I'm always going to remember for the rest of my life," said Christian. De Jesus wants to make sure he can extend his and Kyle Dutra's careers a few more games, though. "Getting that national championship with him would be great, too," said Christian. But he's not looking past tonight. "I definitely want to beat Santa Rosa."

It's senior night as the Spartans play their final home game of the season tonight versus Santa Rosa JC. Thing get started at 7:30 pm at Sharks Ice at San Jose. Graduating seniors Kyle Dutra and Christian De Jesus will be honored before puck drop. The game will be broadcast in its entirety on Black Dog Enterprises, and will also be joined in progress on 90.5 KSJS, at the conclusion of the SJSU-Utah State men's basketball game.

Fight on, Spartans! (In both games!)