How does Matt Irwin compare to his fellow rookie defensemen?

Despite not playing nine games this season, Matt Irwin has scored more goals than all but seven NHL defensemen. How does he stack up against his fellow rookies on the blueline?

Share All sharing options for: How does Matt Irwin compare to his fellow rookie defensemen?

In a Sharks season that has featured few bright spots since the final week of January (and even fewer of the red-light variety), British Columbia-born defenseman Matt Irwin has been a beacon of hope on the blueline. On a team that's had issues breaking the puck out of their defensive zone, Irwin has represented an important half of the Sharks' most reliable puck-moving tandem. For a coaching staff that has stressed the importance of their defensemen exploiting shooting lanes, Irwin has pounded shots on goal at a higher rate than all but five NHL blueliners. And on a team that scores less frequently than a D&D Dungeon Master, only Patrick Marleau, Logan Couture and Joe Pavelski have put the puck in the net more times than Irwin despite him not even appearing in nine games. He's been good.

Irwin might not be your typical rookie defenseman but he isn't exactly atypical in comparison to the players the Sharks have broken in on the blueline in years past. An unheralded college product who lacks draft pedigree and has paid his dues in the minors, Irwin might as well be Justin Braun or Matt Carle or Douglas Murray or Tom Preissing. As with several of those players, what really stands out about Irwin's game (apart from his blasts from the point, obviously) is his poise with the puck and ability to think the game at a high level. Those attributes shine through on plays like this one, when Irwin evaded a forechecking Steve Sullivan, entered the offensive zone, dished the puck to Patrick Marleau then continued to drive the net, drawing a Phoenix defenseman to him and thereby opening up the slot for Marleau to slide into and score. Or this one, when Irwin's quick up to Couture in the neutral zone set up a wide drive that also resulted in a goal. Even when opposing teams begin to take note and deny Irwin time and space to load up the booming slapshot he's used to score more goals than all but seven defensemen in the NHL this season, there's a lot he'll continue to bring to the table.

How much, exactly, does he bring to the table? And how does that compare to other rookie defensemen? I'm glad you asked, dear reader, or else the following bubble chart would seem apropos of nothing. Here's a look at how the 21 first-year defensemen who have appeared in at least 15 NHL games this season have been used by their respective coaching staffs at even-strength and what they've done with those minutes (click to embiggen). 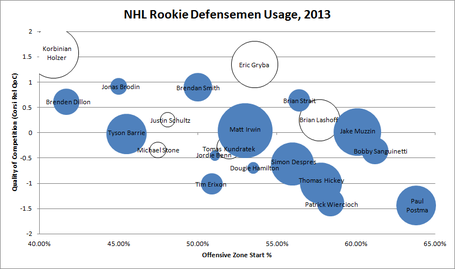 On the horizontal axis is offensive zone start percentage, or the percentage of a player's non-neutral shifts that began in the offensive zone. On the vertical axis is quality of competition, a proxy for determining the caliber of opponents a player is matched up against. The size of a player's bubble indicates the absolute value of his Relative Corsi rating, or the difference between his team's shot differential with that player on the ice and off the ice. A blue bubble means the player's Relative Corsi is positive (the team does better with him on the ice) while a white bubble indicates a negative Relative Corsi (the team does worse). For example, the Sharks outshoot their opponents by 18.2 shot attempts per 60 even-strength minutes with Irwin on the ice and get outshot by 10.6 shot attempts per 60 with him off it, giving Irwin a +28.8 Relative Corsi rating.

As labeled, that big blue bubble smack-dab in the middle of the chart belongs to Matt Irwin. Not only has no rookie defenseman had a larger positive impact on his team's even-strength shot differential, no defenseman in the entire NHL has been better in that regard than Irwin this season. Having Dan Boyle as a partner certainly helps but skating alongside a terrific defenseman is hardly uncommon among the rookies on this chart. Jake Muzzin has been paired with one of the best blueliners in the league in Drew Doughty, Jonas Brodin plays with $98 million man Ryan Suter, Simon Despres has spent a substantial chunk of his ice time with Norris favorite Kris Letang, Thomas Hickey has essentially been attached at the hip to Lubomir Visnovsky and Brenden Dillon skates on Dallas' shutdown pair with the criminally underrated Stephane Robidas. Impressively, Irwin actually does better in his minutes away from Boyle than Boyle does in his minutes away from Irwin.

Per the chart, Irwin hasn't played particularly difficult or particularly easy minutes at even-strength so far this season. He's essentially seen a smattering of both opposing top-six and bottom-six forwards and starts about as often in his own end as he does in the opponent's. This isn't a player whose scoring and possession numbers have been the product of butter-soft usage but he also hasn't exactly been deployed in a shutdown role. With Tyson Barrie inexplicably re-assigned to the AHL, it's difficult to make the case that anyone other than Brodin or Dillon, whose results haven't been as good but play more arduous minutes and still manage to drive play forward, has had a more impressive rookie season on the blueline this year than Irwin. Justin Schultz has piled up points on the Oilers' first power play unit but hasn't been comparable to Irwin in either two-way ability or production at evens. Hell, with Cory Conacher having fallen off the map and Vladimir Tarasenko unfortunately missing time with a concussion, Irwin has likely merited a place in the Calder conversation with his play thus far.

He's 25, plays on the West Coast and is a defenseman lacking gaudy counting numbers so there's no chance Irwin will actually win the award but that shouldn't take away from what he's managed to accomplish thus far in 2013. In addition to helping the Sharks win the neutral zone battle with his puck movement, Irwin is the first left-shooting defenseman in San Jose since Christian Ehrhoff to command defensive respect from his opponents, opening up space for his teammates in the process. Granted, it's only been 19 games so it's best to proceed with caution before penciling Irwin in for the 2014 Norris Trophy. The past few seasons of Sharks hockey should serve as a lesson to temper expectations for young or inexperienced defensemen after Jason Demers and Justin Braun seemingly established themselves as promising top-four blueliners in their respective sophomore campaigns before taking more than a few steps back the subsequent years. If the Sharks opt to keep him around beyond this season, here's hoping Irwin continues to be a steadying two-way presence on the blueline.