After an inauspicious start to his Sharks career. T.J. Galiardi appears to finally be emerging as an impact player.

Share All sharing options for: Has T.J. Galiardi finally arrived?

For a team that scoured the trade market for as many big names as the Sharks did over the life of the NHL's previous collective bargaining agreement, it's either patently ridiculous or a testament to the success of those trades that Doug Wilson's most controversial deal was one involving a trio of third-liners.

When Wilson shipped Jamie McGinn, in the midst of his best season in teal, to the Colorado Avalanche alongside a pair of undrafted prospects in exchange for T.J. Galiardi and Daniel Winnik at the 2012 trade deadline, the outrage was audible and grew only more deafening as McGinn rode a spike in shooting percentage and the chance to play with more talented centers than Michal Handzus to a productive stretch run with the Avalanche. Meanwhile, Galiardi shuffled in and out of the Sharks lineup, registered just one point and twelve shots on goal in fourteen regular season games with the club and dressed just three times during the team's playoff series against St. Louis. For his part, Winnik added a touch of offense and some much-needed play-driving ability to San Jose's bottom six but was regrettably not retained in free agency last summer.

With an underwhelming Galiardi the only piece left, the McGinn trade looked like a disaster exacerbated by the Sharks' glaring roster needs. San Jose entered the truncated 2013 season with arguably one of the worst bottom-six forward groups in the league featuring a woefully over-the-hill Handzus, an inexperienced Tommy Wingels, a player last seen in the NHL in 2010 in James Sheppard, a facepuncher in Frazer McLaren and a pair of fourth-liners in Andrew Desjardins and Adam Burish. And, of course, a question mark in Galiardi. Where the McGinn trade was intended to shore up the Sharks' forward depth, it left the bottom half of their lineup somehow even more depleted than before.

Galiardi's start to the season (as well as the signing of Scott Gomez only to use him sparsely on the fourth line) didn't help matters. Handcuffed to Handzus, but deployed almost exclusively in easy minutes as a result, Galiardi recorded shots on goal in just three of his first 18 games this season, obviously not counting the several for which he was relegated to the press box. He coupled that showing on the shot clock with just five points, more a part of the problem than the solution for a team that struggled to score as a whole but particularly lacked offensive contributions from its bottom-six forwards. Undoubtedly weighed down by poor linemates and the irregularity with which he was inserted into the lineup, Galiardi rarely utilized his skating ability to underpin the Sharks' transition game or deftly work his way into scoring position. Beyond the dearth of offense, he appeared to be a shell of the agitator who was a thorn in the Sharks' collective side as a member of the Avalanche during the 2010 playoffs.

With the 2013 trade deadline looming, over a year after Galiardi was initially acquired, the Sharks were desperate for ways to reverse their ongoing free-fall down the standings. Perhaps encouraged by the moderate success Galiardi was enjoying on a line with Gomez, Todd McLellan took a chance by placing him on a revamped third line centered by Joe Pavelski. As awesome as Pavelski is (and he's really awesome), it's probably safe to say that line wouldn't have worked nearly as well as it did if Galiardi hadn't rediscovered his game as an effective north-south player with a quick trigger, a change perhaps best encapsulated by his vastly improved shot rate: 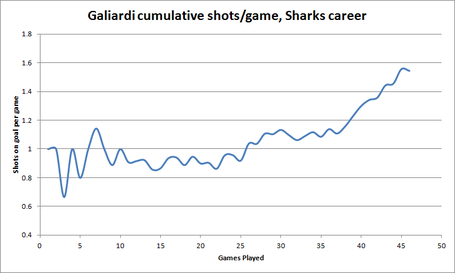 Galiardi first skated on Pavelski's wing during his 32nd career game as a Shark and has seen a sharp upward ascent in his cumulative shots per game average ever since. In addition to scoring twice and notching four assists, Galiardi registered 23 shots on goal in 10 games as Pavelski's linemate. In the four games since then during which he's skated on the team's de facto top line with Joe Thornton and Brent Burns, he's pounded 14 shots on net, a pace that would likely produce about 30 goals over an 82-game season given Galiardi's career shooting percentage. Of course, it's improbable that his most recent pace is sustainable and we're slicing sample sizes really thin here but the numbers seem to confirm what has been clearly observable on the ice; Galiardi has been an impact player for the Sharks and it isn't entirely a coincidence that their current 11-2-1 run began when the coaching staff increased his role.

I hate to pile on the guy given that he's long gone and deserves no blame for either signing the contract he was handed or playing the minutes he was given, but it's difficult to overstate the negative impact playing on Handzus' wing had on Galiardi's trajectory in teal. In the 70 even-strength minutes for which those two shared the ice this season, the Sharks earned just 37.4% of all shot attempts as compared to 53.4% with Galiardi on the ice alongside any other center. As with the trade of Douglas Murray to Pittsburgh, shipping Handzus to Chicago (as well as the preceding period during which he was chained to the press box) was more addition by subtraction for the Sharks and perhaps benefited no one more than Galiardi. The 2012 trade deadline brought him to San Jose but, ironically, it was Wilson's moves and McLellan's subsequent reconfiguration of the lineup at the 2013 deadline that really allowed Galiardi to shine. He and Handzus were buried by mediocre opposing players during their time together and while that may be a sign that Galiardi isn't quite good enough to singlehandedly drag a boat anchor around the ice, it should never have been seen as an indication that he can't be a useful player in the right circumstances.

Those circumstances emerged and Galiardi has decidedly emerged as a bonafide top-nine forward along with them. The Galiardi of last season and the earlier stretches of this campaign is unrecognizable on plays like this one, when he led a breakout out of his own end, gained the offensive zone with possession, recovered a loose puck behind the net and deposited it at the point against the check of Drew Doughty, won another puck battle on the half-wall and then slid undetected to the front of the net to cash in his fourth goal of the season. Finally fit into the right spot, Galiardi has proven to be an important piece of the puzzle that has neatly fallen into place for the Sharks over the past month. Perhaps even more significantly, Galiardi finally looks like the player Wilson traded McGinn for last year and seems like a good bet to figure into the Sharks' future plans both over the remainder of this season and beyond.