Picks, stats and analysis for the 2013 Western Conference Quarterfinals.

Continuing an annual tradition (that's been running for a grand total of one year), we at Fear The Fin sat down and shared our picks for the three Western Conference Quarterfinals series that don't involve the Sharks (that preview comes tomorrow). Here are those picks, along with the requisite analysis and nerdstats to justify them for when Minnesota wins the Cup and makes us all look silly. 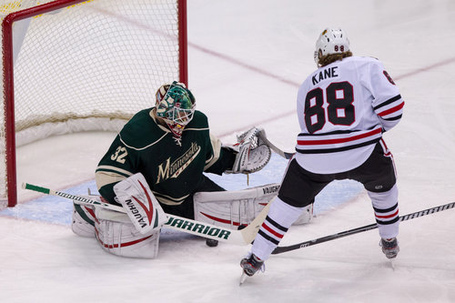 Patrick: Chicago came screaming out of the gate this season, thanks most in part to lofty Sh% and Sv%. But as the year cruised along (as you can see in the cumulative corsi differential graps) the ‘hawks backed that up with a strong possession game. Outside the usual marquee players, (Toews, Kane, Hossa) SAAD (2nd highest Corsi for forwards on the team at +15 Corsi diff/60), Leddy, and Rozsival have vaulted Chicago into an elite possession team. I’ve always been a big fan of Bolland, and he typically gets buried against tough competition in the defensive zone, so his numbers aren’t that impressive. But having that type of player (ala Malhotra) can really free up some space for other forwards.

When the Wild went out and bought some post-season games this off-season a lot of ink was spilled, but the effect was polarizing. As it turns out, they’re more on the fringe playoff side of things than the cup contenders some predicted them to be. As indicated by their chart, they’ve been relatively mediocre in possession this year, with somewhat of an upturn around game 40. It will be interesting to see if that was a fluke, or a real change for the Wild. Blackhawks in 5.

Ann: This is as close to an NBA playoff series as the NHL is going to get. You’ve got a team that had a point streak last half the season, and then you have the Minnesota Wild. As good as the $98 million men are, Chicago has a team that could compete even without the salary cap. While hockey playoffs are notorious for their unpredictability, the Blackhawks are too good. Plus, Chelsea Dagger is a hell of a goal song. Blackhawks in 4.

Mike: Call it the curse of Dany Heatley. The Wild spend several kajillion dollars and barely beat out The Lumbus to squeak into the playoffs, only to get smashed by the Hawks train. Still, two home playoff dates will help pay for Ryan Suter's travel expenses. Blackhawks in 5.

Jon W.: This is the only series in the West that doesn't match up two similar teams. The Wild could make this competitive... in a couple years. But based on their track record, I don't trust their young players come through against the juggernaut. Blackhawks in 4.

Derek: On paper, this looks an awful lot like the most lopsided playoff series in recent memory. Chicago has been the class of the league all year while the Wild likely wouldn't have made the playoffs had Jeremy Jacobs not been a massive dickhole and canceled half the season. Ryan Suter and uber-rookie Jonas Brodin will be tasked with handling the likes of Jonathan Toews and Marian Hossa which I'm really not convinced will be all that successful an endeavor for Minnesota. Even if Suter and Brodin play the series of their lives, the Wild blueline simply doesn't have the depth to counter successive waves of the Hawks attack, especially when those waves feature Patricks Kane and Sharp. With Dany Heatley injured and Jason Pominville out at least for Game 1, depth up front is an issue for Minnesota as well. Even a healthy Wild team with an extra top-four defenseman materialized out of thin air would be in tough against these Blackhawks; I don't think this iteration of Minnesota stands much of a chance. Blackhawks in 5. 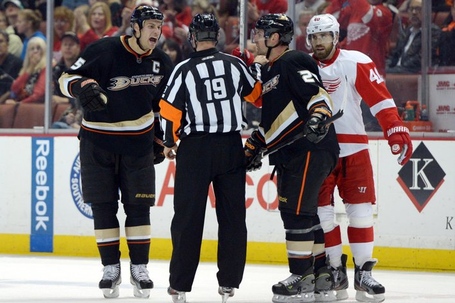 Patrick: I love this series, just look at that chart. I haven’t run the numbers for TOR-BOS, but I bet this difference would even rival that, (OK probably not, but it would be close). Taken in sum (which is being generous really) there is a total of 625 Corsi diff between these teams. That’s roughly a +13 Corsi per game over the 48 game schedules. If we assume Corsi Sh% is around 5%, that’s roughly a 0.65 goal advantage per game, which may not sound like a lot, but trust me, that is a huge gap (for comparison, home ice is worth approximately 0.13). Of course, over this short schedule PDO matters more, and at this sample, it’s anyone’s guess as to how those chips will fall. Red Wings in 6.

Ann: Does there have to be a winner? There does? Oh, alright. For part of the year, the Ducks were considered Chicago-esque with some of their winning streaks. But something tells me that there was some luck to those streaks (and by something, I mean all the articles Derek and Patrick have put out this season). The Wings, on the other hand, looked to be out after Nicklas Lidstrom decided that he didn’t feel like playing hockey anymore. But they’re not, and this series is what we have here. Oh, and this whole rambling prediction is my way of saying I have no idea what is going to happen, so I just picked Red Wings in 7.

Mike: I see this as Anaheim going up 3-1, then Detroit pushing back for one massive Pavel Datsyuk game, then Anaheim closing them out in the sixth game. And somewhere along the way, Corey Perry does a major dickhead
move. Ducks in 6.

Jon W.: I think this is actually a pretty even match-up despite the seeding. We've all heard the regression slight against the Ducks, and it has seemed to catch up with them a bit - I think they would have lost the division if this was even a 54 game season. But I'm not going to completely discount them. The Ducks have a lot of talent and will get a bounce or two, but I see the Red Wings prevailing in the end. Red Wings in 7.

Derek: Interestingly, this is the second straight postseason in which Detroit draws a first-round opponent who dramatically outperformed their shot differential during the regular season. Like the 2012 Predators, the Ducks relied on favorable percentages and a dominant power play to enjoy success in the face of some sub-par underlying numbers. While Detroit did end up losing to Nashville last spring, that had more to do with the play of Jimmy Howard and Pekka Rinne than with a systemic failure in the Red Wings' game; they dictated the pace of that series throughout. It's possible they lose to an inferior team in Anaheim in a similar fashion, especially since the Ducks have far more offensive weapons than Nashville could ever dream of, but I wouldn't bet on it. Despite the prevailing narrative detailing the Wings' demise--and make no mistake, they're a decidedly worse team without Lidstrom on the back end--this is still a team that can kill you with their puck movement and skill level. Red Wings in 6. 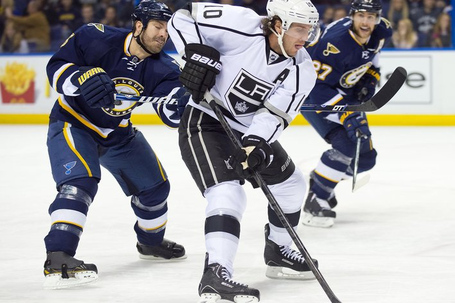 Patrick: If there is only 1 series you could watch this post-season (outside of the Sharks) for pure hockey talent, it would be this one. This series doesn’t carry the heavy weight names like Crosby-Tavares, Getzlaf-Zetterberg, or Ovechkin-Nash, but both these teams have deep, fast, skilled rosters. It just makes for much more enjoyable games when you don’t have to wait 5 minutes after the top lines take their shift for anything to happen again. Sharks fans know better than anyone at this point how deep the blues are; Backes, McDonald, Steen, guys like Tarasenko making a name. A lot will be talked about Quick and Elliot, and their (ahem, luck-driven) performance will largely swing this result, but ultimately this series is won via puck control. Kings in 7.

Ann: If I was really into military history, I’d make a reference to some famous, bloody battle here. Battle of the Bull Run? Let’s go with that. These teams are physical grinders who will battle for every inch of the ice. You know the infamous Penguins-Flyers series last season? It’s going to be the exact opposite of that. Still, the Kings look like last year’s team (including the slow start and subsequent hot finish), which gives them the edge. Sorry Blues. Kings in 6.

Mike: I actually don't care who wins this one as long they beat the living shit out of each other for the second round. Kings in 7.

Jon W.: Two dominant possession teams that have had less than stellar goaltending this year. If either side gets hot goaltending, they win. And Brian Elliot has been hot lately, but I'm not picking against the champs again. Kings in 6.

Derek: Presumably, the entire Western Conference breathed a collective sigh of relief when the Kings held on to defeat the Sharks 3-2 on Saturday night to clinch the fifth seed and a first-round date with the St. Louis Blues. After Chicago, these are not only the two best teams in the West but they're similarly built, ferociously physical juggernauts. And yet one of them will be on a golf course two weeks from now and the other will be beaten and bloodied heading into the second round. This really seems more like it should be a Conference Final series rather than one in the opening round; it's just too close to call.

Los Angeles is an elite even-strength puck possession team but the Blues are no slouches in that department either. St. Louis has a slight edge on special teams while both clubs suffered through atrocious goaltending throughout the regular season; the difference is that while Brian Elliott is legitimately bad at hockey and Jaroslav Halak is perpetually injured, Jonathan Quick has something of a track record as you might recall. There's also the matter of the Kings having won their last eight meetings with St. Louis, four of which came in their sweep of the Blues during last spring's semifinals; they're one of the few teams in the league capable of effectively and routinely countering Ken Hitchcock's forecheck. I highly doubt this series will be as easy for L.A. as last postseason's was but with more high-end forward talent, greater territorial dominance and a recent history of getting it done against this Blues team, I'll pick the Kings in 7.