A pressured breakout occurs when a team retrieves the puck with minimal time to make a play due to oncoming fore checking pressure. Under this circumstance, teams utilize practiced breakout plays, involving a series of short, timed passes to successfully move the puck away from pressure and out of the zone.

Throughout the year we have frequently commented on the need for a puck moving defensemen on the ice at all times. Icing 2 stay at home defensemen can lead to breakout errors, resulting in shifts spent entirely in the defensive zone. Great puck moving defensemen utilize speed and puck handling to relieve pressure and move the puck quickly, obviating the need for a set breakout. If there is heavy forechecking pressure, however, a set play is required to cleanly exit the zone. Today we will explore one of the Sharks most utilized breakout plays, the "over" and the analyze the keys to it's success.

The above figure is adapted from Plays and Strategies, a phenomenally detailed book that, if one is interested, sheds light on every hockey system and plays employed by todays NHL teams.

The Sharks employ a similar "Over" breakout, but usually have their play-side forward (RW above) come down the boards a bit farther for support. The play-side forward has to try to be in front of either the opposition forward or pinching defensemen (between opposition and net). If he isn't the pass will be intercepted. The center (C) supports the play by putting himself in between the puck and the net, for defensive support in the case of a turnover, or as the primary outlet pass from the play-side forward (or on occasion, receive a direct pass from the D if there is no pressure).

The Sharks tend to play very close, making short passes instead of long ones. The theory being a short pass has a much higher chance for success. The weak-side winger (LW above) can either support like shown above, or often will drive up the center of the ice to back the D off (increasing the neutral zone gap) looking for a stretch play.

We'll take a look at an "over" breakout play that occurred in the first period of game 1. Just prior to the play shown below was a neutral zone faceoff on this (from camera view) side of the ice. The Canucks won and elected to try a hard rim past Niemi to the weakside. The sharks weak-side D (Hannan) was back quickly, and with an F1 on top of him, he elects to kick the puck deep to play-side D (Stuart) behind the net. Sharks forwards are in position to see where the puck goes and react accordingly. 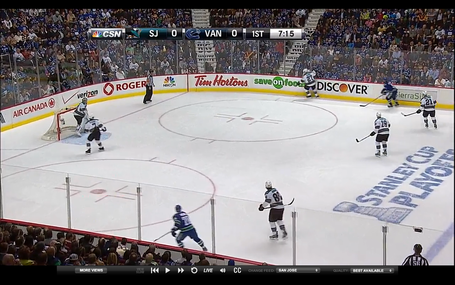 Weak-side D (Hannan) kicks the puck toward the back of the net (above), while play-side D (Stuart) peeks behind him to see where pressure is coming from. 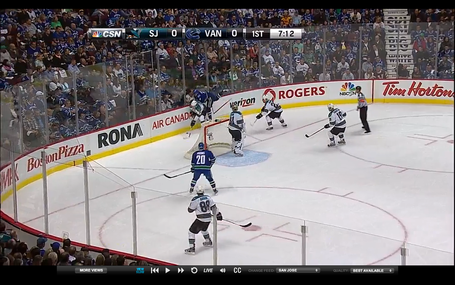 In the above pic, Stuart shields the puck from oncoming pressure, and is going to pass the puck along the boards up to the play-side F (RW – Burns), who peeks behind him just before receiving the puck to read where pressure is coming from. 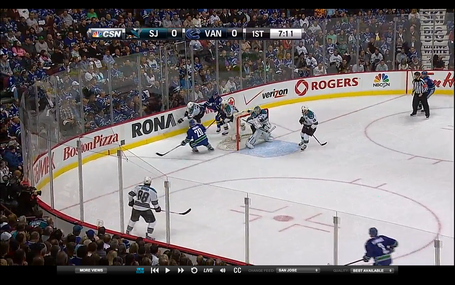 Play-side F (RW-Burns) has slid over to the half-wall, down close to the faceoff dot (this is typically where the F will sit, Burns even a tad lower on this play), while center (JT) is currently sitting in a good defensive position, but will slide over to provide the primary passing option (or puck support in the event of a scrum). 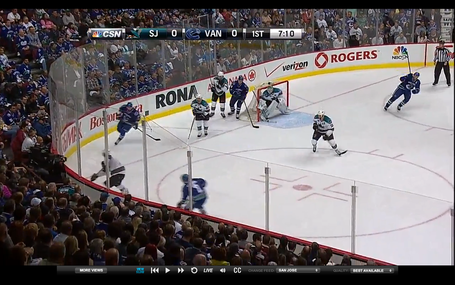 Burns picks up the puck, and JT puts himself into a nice passing lane, as he sees Burns has time to make a pass. 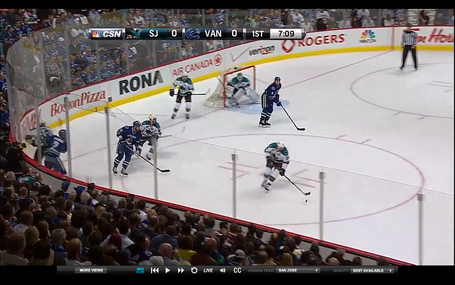 JT receives the puck, and looks up ice to see where weak-side F (LW-Galiardi) and defense pressure are. 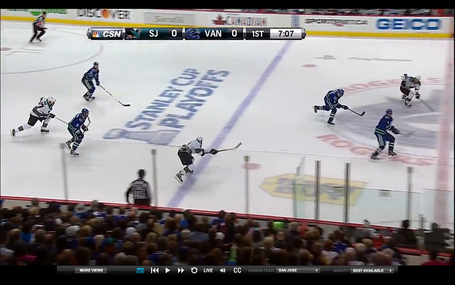 Weak-side F (LW-Galiardi) made a great read on this play, getting on his horse early to drive up the ice for a stretch play. His speed catches the Canucks a bit off guard, and JT threads a pass through to him, Galiardi fumbles the puck just a bit, or this would have otherwise been a clear breakaway.

This breakout is the Sharks bread and butter. Both with the "Over" play shown above, or a similar iteration "Up" where the D doesn’t play back to his partner, but instead plays the puck up the half-boards to the winger, with support through the middle coming from the center.

Execution and timing are obviously critical with these plays. The Sharks emphasize close puck support to optimize the chance for a successful pass. The Sharks do employ a few other types of pressured break-outs, but look for the "Over" and "Up" with the key player being the center supporting the puck, acting as the primary passing option.

As Matt noted in his game recap, the Canucks have been jumping on top of the Sharks breakout by putting their F2 (second, slightly higher positioned forward on the forecheck) into those key passing lanes, waiting to intercept the pass. If there is one thing that the Sharks tend to do, it is execute these plays without looking at the coverage. The Sharks get burned by making that pre-meditated pass without looking to see if the lane has been cut off. I think the key will be on the weak-side F and Center to put themselves into a good passing lane, and not letting the Canucks players get between them and the D making the pass.