Following a face-off win, teams employ specific plays to effectively move the puck out of the zone. We'll go through the Sharks most often used breakout following a defensive zone face-off win.

I should have done this last post, but here is a glossary of terms to better understand the play descriptions.

Play-side (aka strong-side): This is the side of the ice that puck has moved to, or will be moved to in order to accomplish the desired task. The puck doesn't always start play-side, nor does it always end on the play-side. The play-side changes, either left or right depending on the location of the puck and the play being executed. Often, it is the side of the ice where a majority of the action takes place, and where most of the players are.

Weak-side (aka off-side, or back-side): The opposite side of the ice from play-side. There is generally less activity on this side. For example, a "back-door pass" is a pass to a player (usually in motion) to the weak-side, where there typically are less opposition, or in a sub-optimal position.

That being said, both play-side and weak-side contain players and position that is critical to the success of plays, and players need to be aware of both sides during a play.

For clarification I'll define play-side as the same side of the ice as the face-off. This is where the puck starts and the initial action occurs. 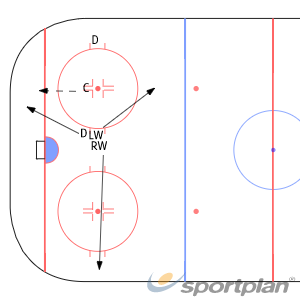 Here is the set-up. Sometimes the D will be directly behind the center, or shaded (slightly towards) the slot. The defensemen will be positioned based on handedness, so that the D going back to retrieve the puck will be passing using forehand and not backhand, which sometimes results in the D temporarily switching positions. One of the principles of Todd McLellan's system is to always keep assignments for players simple, so that they can react quickly, without thinking. A great example of this is the LW's face-off assignment. He travels out to the point no matter what, which achieves 2 things. A) pressure the point in the event of a loss and B) Receive a pass up the boards if D (Stuart in this play) elects to shoot the puck up the near boards quickly. This assignment is common in the Sharks system. A player moves into a position that is both sound defensively, but also available for puck support in the event of a breakout. This movement is automatic, and the player doesn't have to "read" anything, KISS tactics to speed up the team. 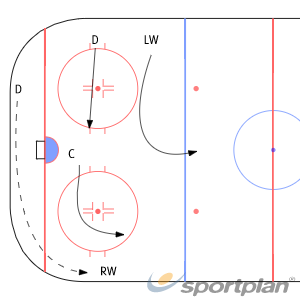 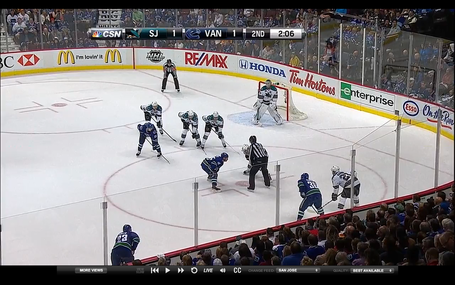 Standard set for the Sharks (above) with D on play-side (D - Hannan, boards closest to us), and weak-side D (D - Stuart) either in the slot, or behind center (Couture). Here Stuart is positioned in the slot next to weak-side F (Marleau )and play-side F (Torres). 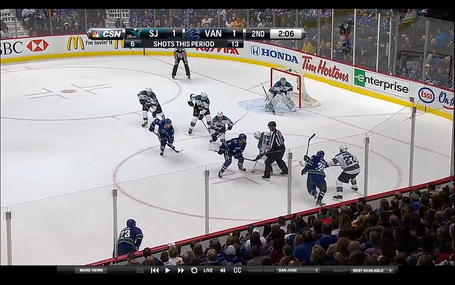 Couture draws straight back, (above) and Hannan and Torres attempt to tie up their wingers, with Torres moving out to the point, as described above. 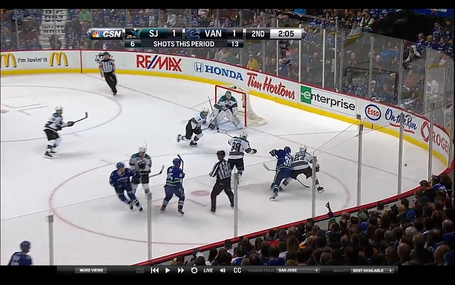 Puck moves to the corner as Stuart races back while Hannan ties up his man. The weak-side F (Marleau) activates to far (weak-side) boards, to be ready for a backhand pass and Couture supports the puck low, in a good defensive position. 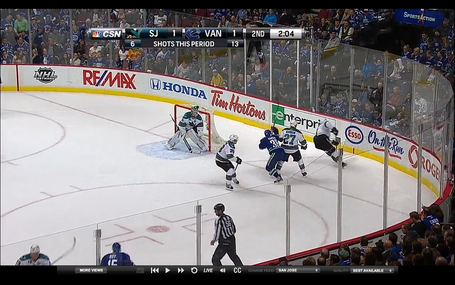 From this position(above), the Sharks give the their defense men 2 options. 1) Either the "Up" play (terminology from Plays and strategies, probably called something different by TMac) where Stuart fires the puck on his forehand up towards the play-side winger (Torres) who can chip it out of the zone, preferably somewhere Marleau can reach it. Or 2) A backhand "Rim" play to the weak-side winger (Marleau). This is what Stuart chooses to do. 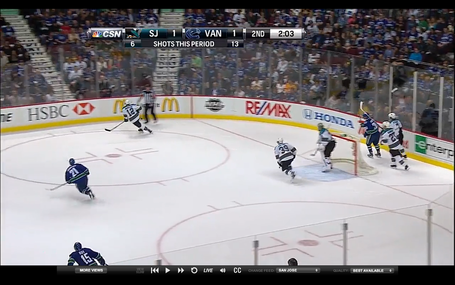 Marleau (above) is in position to receive the rim, and center (Couture) heads towards weak-side for support. 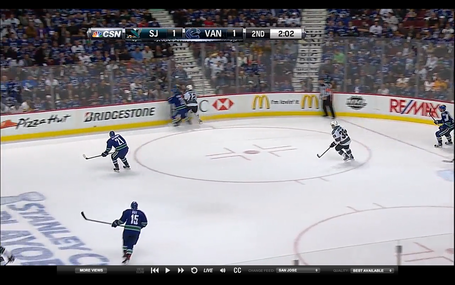 With the puck along the boards (above), the weak-side winger (Marleau) has the Center (Couture) as the primary passing option in the event of heavy pressure. But here weak-side F (Marleau) sees that weak-side D (Bieska) is pinching and slides the puck up the boards vacated by weak-side D so that Torres can skate into it. The Canucks played a 2-1-2 forecheck predominantly throughout the series (more on that later), which is why weak-side D (Bieska) pinched down. Their Center (Ryamond above) attempts to cover the point. As you can see, Marleau read the play well; Raymond was not covering the point, so his chip out of the zone could be recovered by the speedy Torres. (below) 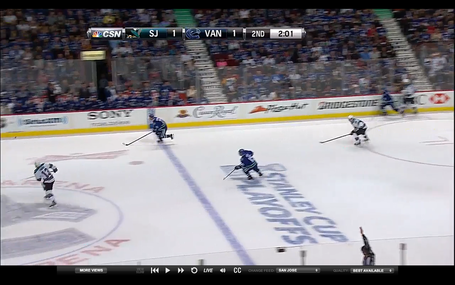