We continue our look back at the performance of each player who ended the season with the team after skating in a significant number of Sharks games over the course of the year with a review of Brad Stuart's 2013 season. 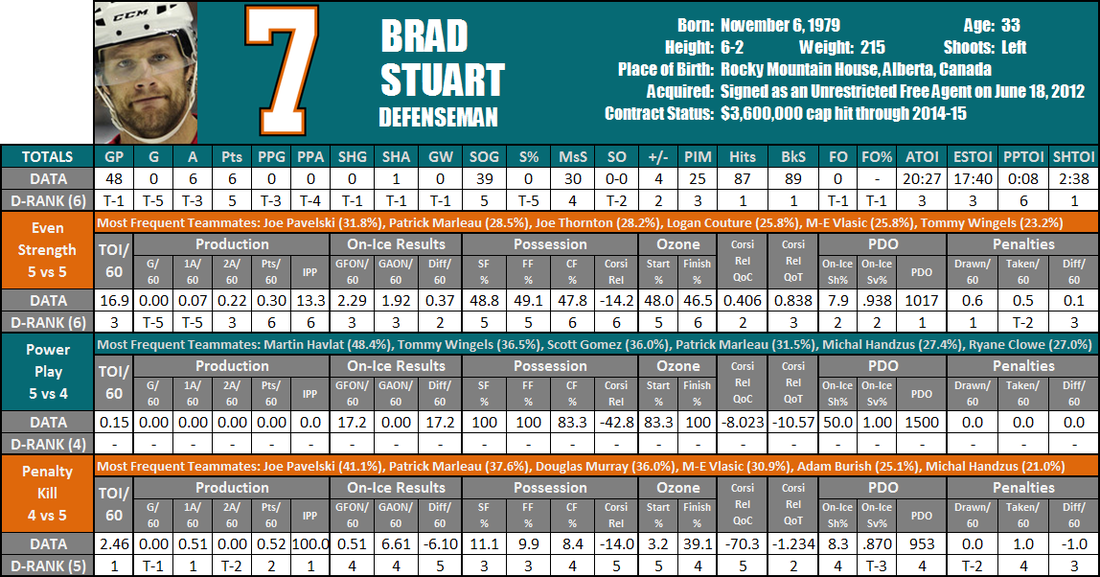 Stuart with and without his most frequent defense partners: 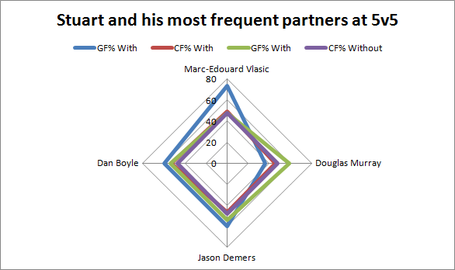 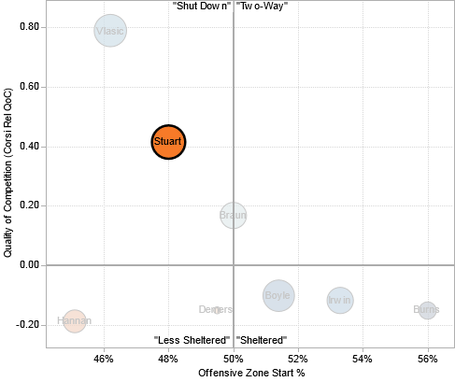 The Good: Brad Stuart was brought back last summer for a second tour of duty in teal to both fix the team's woeful penalty kill and serve as an upgrade over an increasingly immobile Douglas Murray on the team's second pairing. Well, the Sharks boasted one of the most improved penalty killing units in the league and Murray was rendered expendable in part because of Stuart's presence on the roster (but also because someone was willing to pay two second round picks for Douglas Murray) so Stuart's signing was an apparent success on both counts. The reality is a bit more nuanced than that but there's little doubt Stuart provided what was expected of him as an excellent one-on-one defender and physical presence at even-strength as well as an adept minute-eater shorthanded.

He was noticeably effective at clogging opposing shooting lanes, blocking 8.3% of all even-strength shot attempts directed at the Sharks' net when he was on the ice, and reliably smothered opposing forwards behind his own blueline as San Jose allowed fewer than two goals per 60 even-strength minutes when Stuart was skating. He led the team in shorthanded ice time as the Sharks climbed from two straight bottom-third finishes in penalty killing efficiency to sixth in the league by that measure. While Stuart's individual shorthanded results fell off a bit as the season progressed, he certainly retained Larry Robinson's trust in that game state which is more than enough for me. It's also worth noting Stuart made a seamless transition to his strong side after years of patrolling the right side in Detroit. Really, Stuart was aces whenever the Sharks' opponents had the puck which is mostly what you're looking for in this type of player.

The Bad: The flipside of that last statement is that the Sharks' opponents had the puck an awful lot when Stuart was on the ice, although that certainly can't entirely be pinned on him. As documented in his player card, Stuart finished dead last on the Sharks blueline in on-ice shot differential at even-strength and, while it generally isn't all that wise to compare this metric across teams, placed 164th out of 173 qualifying defensemen in Relative Corsi, the difference in a team's shot differential with a player on the ice compared to off it. Those results would be understandable had Stuart been tasked with the most difficult minutes on the team's blueline in terms of zone deployment and caliber of opposition faced but those minutes usually went to Marc-Edouard Vlasic with Stuart generally drawing second-tier opposing forwards and starting close to an even share of his shifts in both the offensive and defensive zones.

Stuart has never been the most fleet of foot nor the most accurate with his outlet pass (although he was a decided step up in that regard from defensemen previously under the Sharks' employ like Murray, Niclas Wallin and Kent Huskins) but he was largely able to get away with it in his pre-2005 lockout San Jose days and during his tenure with Detroit when he was attached at the hip to high-end puck movers like Niklas Kronwall and Nicklas Lidstrom. That wasn't the case this season as Stuart's limitations were needlessly exacerbated by pairing him with similarly deficient players in Murray, Vlasic and Scott Hannan. While somewhat weighed down territorially, Vlasic skated well enough that he and Stuart weren't perpetually buried in their own end when paired but the mercifully short-lived Murray/Stuart tandem in particular proved an unmitigated disaster. It's concerning that the only defense partner Stuart managed to get on the positive side of the possession ledger alongside was Dan Boyle. Some might question why this matters given Stuart's positive plus/minus but it's important to note that number was largely predicated on Sharks goaltenders stopping 93.8% of the shots they faced when Stuart was on the ice at evens. As well as Stuart played on the defensive side of the puck, it's probably safe to say that isn't remotely sustainable over a full season.

The Future: With two years remaining on a contract that carries a $3.6 million annual cap hit, Stuart will definitely be back next season but a rather open question is where he slots in on the team's defensive depth chart. Not only is that a lot of money to pay a third-pairing defenseman, it seems like a waste of Stuart's obvious defensive value to relegate him to limited even-strength minutes alongside a partner in Jason Demers who he didn't at all seem to mesh with last season. As successful as Matt Irwin and Dan Boyle were as a protected second pairing, it's worth considering whether Stuart would work with Boyle over a full season, although that would leave the Sharks with a rather vulnerable-looking Irwin/Demers third pair if they don't dip into the uber-shallow pool of free agent defensemen. Who would you like to see Stuart paired with in 2013-14?

The Grade: He was saddled with inferior partners for much of the year which helps to explain some, if not all, of his puck possession struggles. But in terms of strict defensive play, both against the rush and in-zone, only Vlasic was clearly better than Stuart on the Sharks' blueline. Although I thought his work on the penalty kill declined a bit as the year went along, Stuart was still an integral part of a vastly improved unit. As far as his lack of offense and limitations advancing the puck, it's hard for me to criticize a leopard for not changing its spots—this is the Stuart everyone should have expected the Sharks were getting last summer—or to penalize the veteran defenseman for some questionable decisions by the coaching staff in constructing their defense pairings. This might be on the generous side but I think I'll give Stuart's 2013 season a B.

The Vote: Based on your expectations for him, view of his potential and the situations in which he was used, grade Brad Stuart's season below on a typical grading curve of A+ to F. If he had the best season you could possibly imagine him having, give him an A+. If he was about where you expected him to be, give him a C+ or C and if he had the worst season you could envision him having, give him an F.