We continue our look back at the performance of each player who ended the season with the team after skating in a significant number of Sharks games over the course of the year with a review of Joe Pavelski's 2013 season. 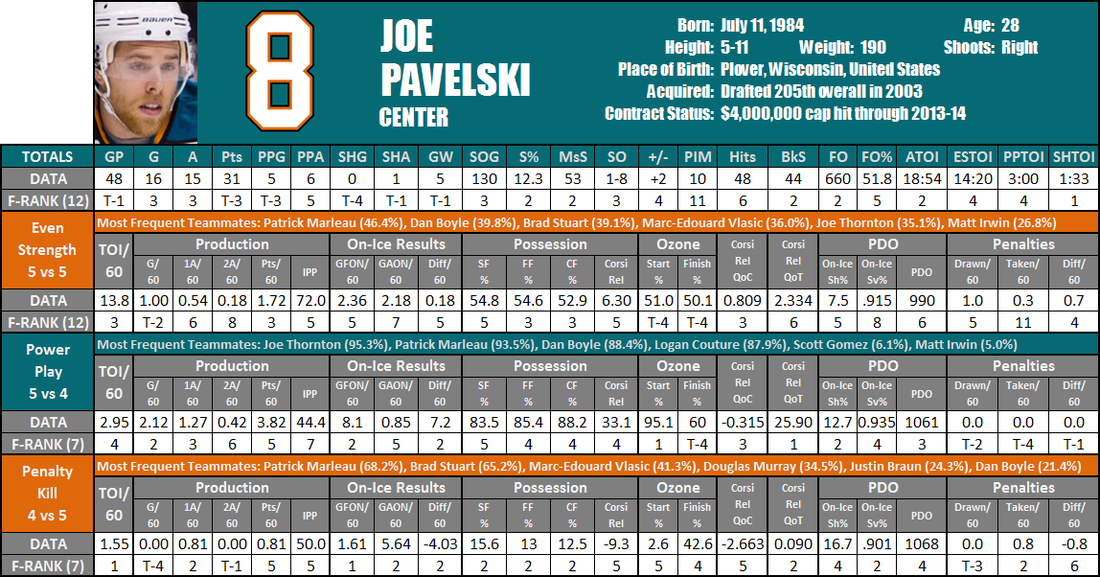 Pavelski with and without his most frequent linemates: 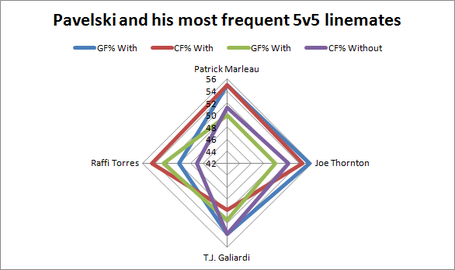 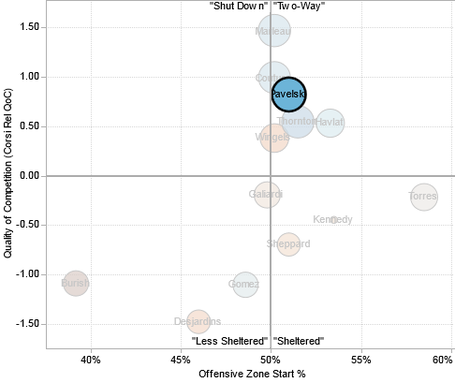 The Good: Brian Burke isn't right about much but few of his comments have been more spot-on than his labeling of Joe Pavelski as a "swiss army knife" at the 2010 Vancouver Olympics. It's a perfect description of Pavelski's value as a player and is entirely applicable to his 2013 season. Pavelski did it all for the Sharks this year, from leading all forwards in ice time on one of the most improved penalty kills in the league to manning the point on the first unit of a power play that proved to be the best in the NHL by the shot metrics for the fourth straight year to tearing it up at even-strength both at right wing, where he compiled 4 goals and 12 points during the Sharks' season-opening 7-game winning streak, and third-line center where he scored 9 goals and 14 points over the team's final 18 games. On a club that finished 28th in the league in even-strength goal-scoring, Pavelski was one of just two forwards (one of fifty league-wide) to score an average of at least one goal per 60 5v5 minutes played. Impressively, Pavelski ranks 28th in the league in even-strength goal scoring rate since 2009, ahead of stars like Ilya Kovalchuk, Zach Parise and Nathan Horton.

Pavelski also led the Sharks in playoff scoring and still sits smack-dab in the middle of the first page of the NHL's leaderboard despite San Jose having been eliminated weeks ago. He once again provided his all-purpose value in the postseason, successfully centering a third line that featured Andrew Desjardins and Tommy Wingels during the first round before slotting in at right wing on the Sharks' first line against Los Angeles following Raffi Torres' suspension. On a man advantage that loves executing set faceoff plays, Pavelski dominated draws on his strong side and was terrific defensively both in and outside the circle throughout the regular season and playoffs as one of the team's most reliable penalty killers and best even-strength possession forwards, driving play in reasonably difficult minutes.

The Bad: Coinciding with the offensive doldrums the team as a whole experienced from February through mid-March, Pavelski scored just five points in a 23-game stretch from February 2nd through March 23rd, although it's certainly worth noting that the Sharks were still an impressive 56.1% possession team in score-close situations with Pavelski on the ice over that span; his lack of production had more to do with some terrible luck than poor play. Largely courtesy that slump, Pavelski's overall scoring numbers on the year dipped to what would pro-rate to 53 points over 82 games after he scored an average of 67 points per 82 games from 2010 through 2012. Again, it's worth noting that was mostly the result of his secondary assist rate, both at evens and on the power play, declining which seems more symptomatic of the team's overall offensive struggles than a shortcoming in Pavelski's game. I'm really terrible at feigning objectivity with this player, aren't I? Um, as far as I know he didn't reunite any lost dogs with their owners this season so that was a disappointment.

The Future: This is where things get dicey for the Sharks. Pavelski has just one year remaining on the bargain 4-year, $16 million deal he signed in the 2010 offseason. He'll be an unrestricted free agent next July and, unless he opts to take another hometown discount, could very easily demand some serious cash. Two possible comparables for Pavelski are Jordan Staal, who signed a 10-year, $60 million deal just prior to the lockout and Travis Zajac, whose 8-year, $46 million contract was the first one inked under the new collective bargaining agreement. Neither of those centers has scored at Pavelski's level over the past four seasons and the Zajac deal in particular is one I would be pointing to in negotiations if I were Pavelski's agent although Ryan Kesler and Tomas Plekanec's matching 6-year, $30 million deals are reasonable counter-offers (of course Kesler's did not exclusively buy up UFA years as Pavelski's would and both were signed under a lower cap than the projected $70 million 2014-15 upper limit). San Jose has never signed a player for longer than six years under Doug Wilson but they might be forced to give Pavelski the maximum eight to bring his cap hit down to the $5 million range; he'll be worth that and more for the first few years of the deal but almost certainly won't be at age 35 or 36. It's an interesting question for the Sharks complicated by the simultaneous expiry of Logan Couture, Patrick Marleau, Joe Thornton and Dan Boyle's contracts. It's definitely one they'll want to answer before Capocalypse 2014 hits.

As for next season, if everything goes as planned, Pavelski should be penciled into the third-line center role for opening night, likely between either Raffi Torres or a free agent replacement on left wing and either Tommy Wingels or Tomas Hertl on right wing. With Jordan Staal now in Carolina's top six, there really aren't any third-line centers in the league on par with Pavelski and he'll continue to give the Sharks a serious advantage in the even-strength matchup game, as well as on both special teams units. Hopefully San Jose remains deep enough up front (which means keeping Brent Burns as a forward and replacing Martin Havlat with a more durable free agent) that they can have the luxury of placing Pavelski on the third line for at least one more year.