We continue our look back at the performance of each player who ended the season with the team after skating in a significant number of Sharks games over the course of the year with a review of Martin Havlat's 2013 season. 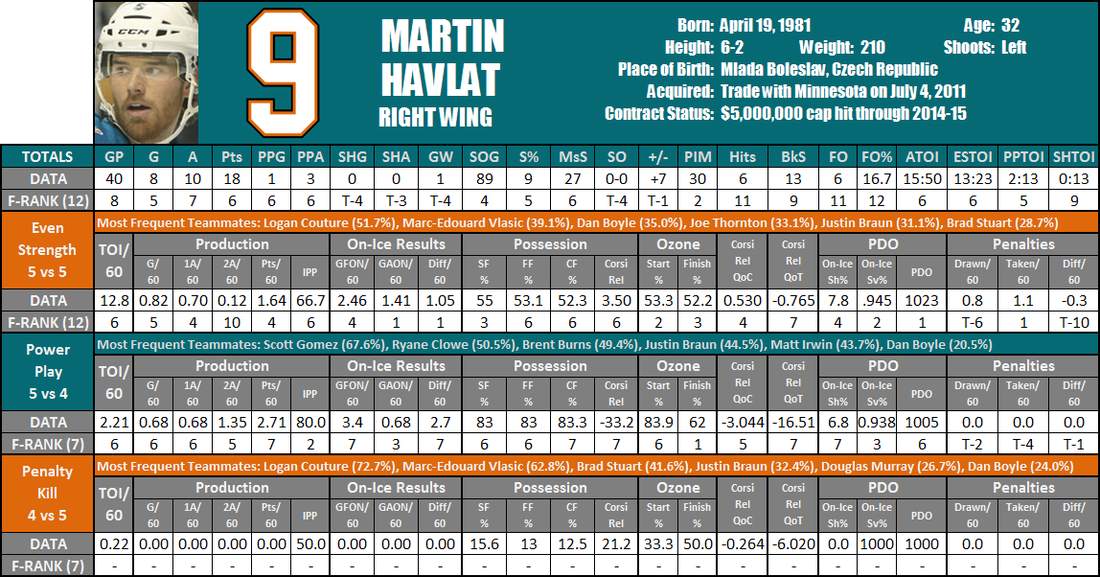 Havlat with and without his most frequent linemates: 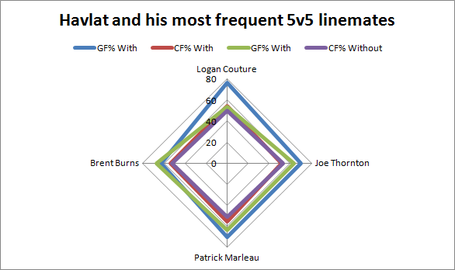 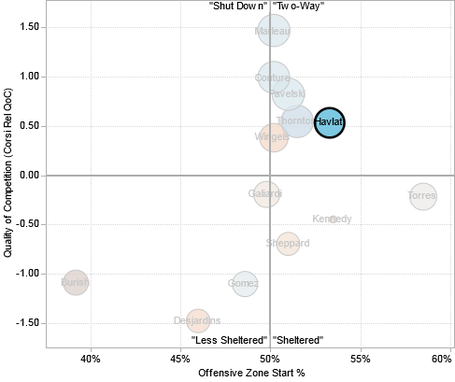 I'm Sorry Martin Havlat, But We Need To Break Up 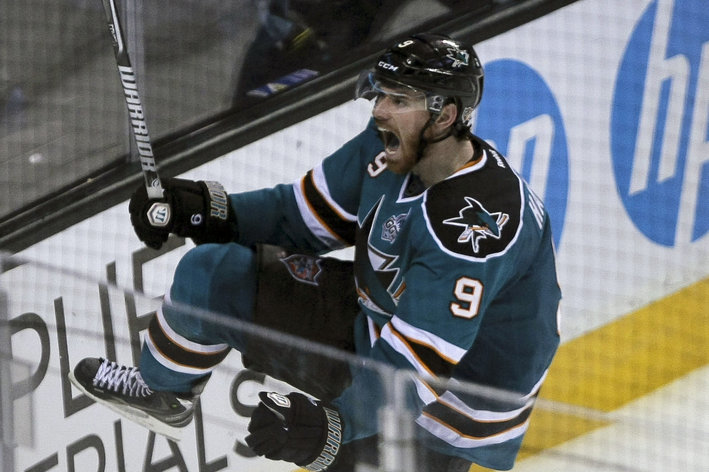 After two disappointing seasons, it might be time for the Sharks to dump the Czech winger.

The Good: When he was in the lineup, Havlat was one of the Sharks' more dangerous even-strength forwards. Which admittedly isn't saying much on a team that mightily struggled to produce offense 5v5 all season and ended up finishing 28th in even-strength goal scoring, but it's still somewhat impressive that only Brent Burns, Logan Couture and Joe Pavelski scored more even-strength points per 60 minutes of ice time in 2013 than Havlat and that Havlat accomplished that without the help of many inflationary secondary assists. The Czech winger was also a plus-possession player, using his speed and puck skills to help the Sharks carry play through the neutral zone and, while I personally wouldn't use plus/minus to evaluate players, it's at least worth noting he finished first on the team in 5v5 plus/minus per 60 for the second year running. Havlat was particularly effective down the stretch when placed on a line with Patrick Marleau and Logan Couture that routinely kicked in the teeth of opposing top lines. Havlat and Couture showed a great deal of chemistry all year as Havlat scored 9 of his 14 5v5 points while playing on Logan's wing. As much as what transpired over the course of Havlat's postseason leaves an understandably bitter taste in everyone's mouth, he did manage to stay healthy by Havlat standards throughout the regular season, appearing in 40 of the Sharks' 48 games, marking the fourth time in the last five seasons he's played in 83% or more of his club's regular season contests.

The Bad: But boy was that postseason rough. Havlat appeared in just two playoff games, failing to survive past the first period in either of them. It felt like the punctuation mark at the end of his injury-riddled two-year stint in teal and, according to Kevin Kurz, it very well could have been:

Havlat was seen walking from the locker room on his way out of HP Pavilion less than 10 minutes after Game 3, and in the coming days, lost his locker stall at the practice rink, moving to a temporary stall. Meanwhile, AHL call-ups Matt Pelech, Freddie Hamilton and Matt Tennyson all had regular locker stalls, which could be viewed as an indication that the team wasn’t happy with Havlat’s disappearing act. At Game 7 in Los Angeles, rather than sit with his fellow Sharks scratches in the press box, Havlat sat on the complete opposite side, away from everyone.

Havlat was also entirely ineffective on the second unit power play all year long, which wasn't necessarily a big concern for a Sharks team that generated more than their share of 5v4 offense with a potent first unit, but served to really deflate his overall boxcar numbers; Havlat's 18 points in 40 games would translate to a paltry 37 points over a full 82-game season. Perhaps because their styles of play are a bit too similar to be compatible, Marty also struggled during his stint on Joe Thornton's left wing as that line proved far superior when Havlat was replaced with T.J. Galiardi.

The Future: Assuming the two years and $10 million cap hit ($11 million in salary) remaining on Havlat's deal are untradeable, buying him out would cost about $7.33 million in real money but wouldn't carry a cap penalty should the team claim it as one of their two amnesty buyouts. The franchise has never previously bought out a player but with Hasso Plattner's deep pockets now running the show, it's possible ownership would be amenable to the idea. What's worth considering is whether the Sharks would be better served by rolling the dice on one more season from Havlat before dumping him in the 2014 offseason, just prior to Capocalypse, when clubs will still be allowed to exercise the amnesty option.

If Tomas Hertl makes the team, the Sharks would still have about $2.5 million to spend on Raffi Torres or a replacement and remain cap compliant for the coming year even with Havlat on the books. It's entirely possible Havlat hamstrings the team by sustaining another injury, but it's also possible the flashes of brilliance he displayed alongside Marleau and Couture late in the season can be replicated over a full year and that, along with the fact that only one year would be left on his contract at that point, Havlat suddenly becomes a tradeable asset next summer. Perhaps this is all a moot point and the organization is as finished with Havlat as their response to his disappointing postseason suggests but keeping him for one more year wouldn't be the worst idea in the world.