We continue our look back at the performance of each player who ended the season with the team after skating in a significant number of Sharks games over the course of the year with a review of Andrew Desjardins' 2013 season. 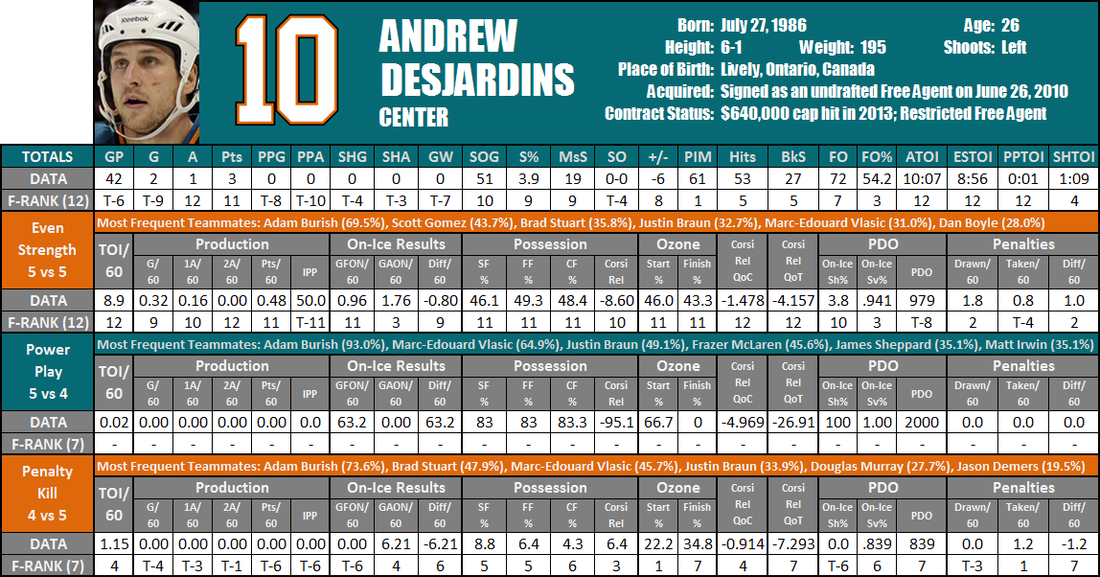 Desjardins with and without his most frequent linemates: 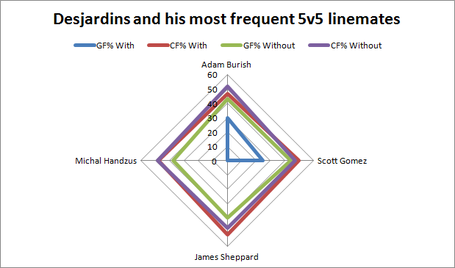 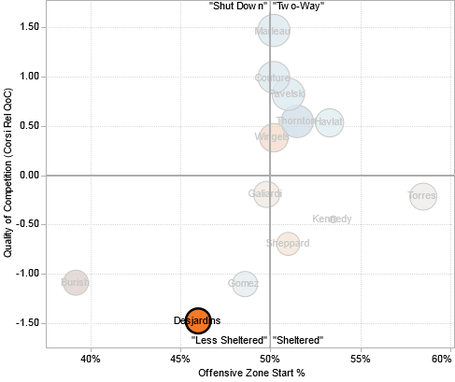 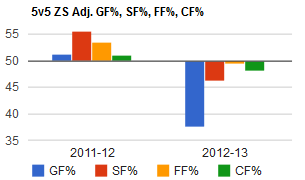 The Good: Andrew Desjardins is pretty much everything a team could want in their energy-line center. He dominates the faceoff circle, skates very well for a fourth-liner, consistently finishes his checks, capably fills in on the penalty kill, isn't afraid to take risks at the opposing blueline and, above all, agitates the living hell out of opposing players. Sometimes a few of these attributes combine for a nice effect, like when Desjardins drilled Colin Fraser behind the Kings net in a March game and drew both the ire of Jake Muzzin and a double minor penalty which the Sharks thoroughly cashed in. Desjardins actually finished 10th in the NHL in penalties drawn per 60 minutes, drawing 11 unmatched minors in all over the course of the season. Although I'm generally loathe to resort to clichés like "never takes a shift off" it's an apt description of Desjardins' game; he's far from the most skilled player on the ice and is never going to provide much in the way of offense but he consistently gets under the opposition's skin, ensures the play never dies on his stick in the offensive zone and is surprisingly effective at catching defensemen off guard at the blueline and entering the zone with the puck. And as much as offense isn't his strong suit, he was responsible for one of the prettier Sharks goals this season:

The Bad: Above all, the problem with Desjardins' 2013 season was Adam Burish which is somewhat ironic given that Desjardins largely developed over the course of the year into the player the Sharks presumably thought they were getting when they signed Burish last summer. Desjardins' sub-par on-ice results and possession numbers at even-strength can mostly be traced to his time alongside Burish; when the two were on the ice together 5v5, the Sharks scored just 30% of the goals and earned 46.7% of all shot attempts but when Desjardins was separated from Burish, those percentages spiked to 42.9% and 52%, respectively. Those are admittedly small samples in a truncated season but what transpired on the ice was largely reflective of the underlying data; Burish rarely made strong plays with the puck, routinely turning it over in the neutral zone and while attempting to exit his own end. Desjardins can't be entirely absolved of blame for their poor performance together as there's certainly room for improvement in his decision-making in the defensive zone but I don't think it's much of a coincidence that Desjardins' most effective games came on a line with Scott Gomez and James Sheppard. Desjardins also deserves negative marks for ditching #69.

The Future: A restricted free agent on July 5, Desjardins could hit unrestricted free agency as early as next summer so a one-year deal likely makes the most sense for both player and team, probably totaling somewhere around the $704,000 it would cost the Sharks to tender him a qualifying offer. If Scott Gomez isn't back next year, Desjardins can probably expect to center San Jose's fourth line on opening night, likely between James Sheppard and either Burish or, preferably, Tommy Wingels.