We continue our look back at the performance of each player who ended the season with the team after skating in a significant number of Sharks games over the course of the year with a review of Patrick Marleau's 2013 season. 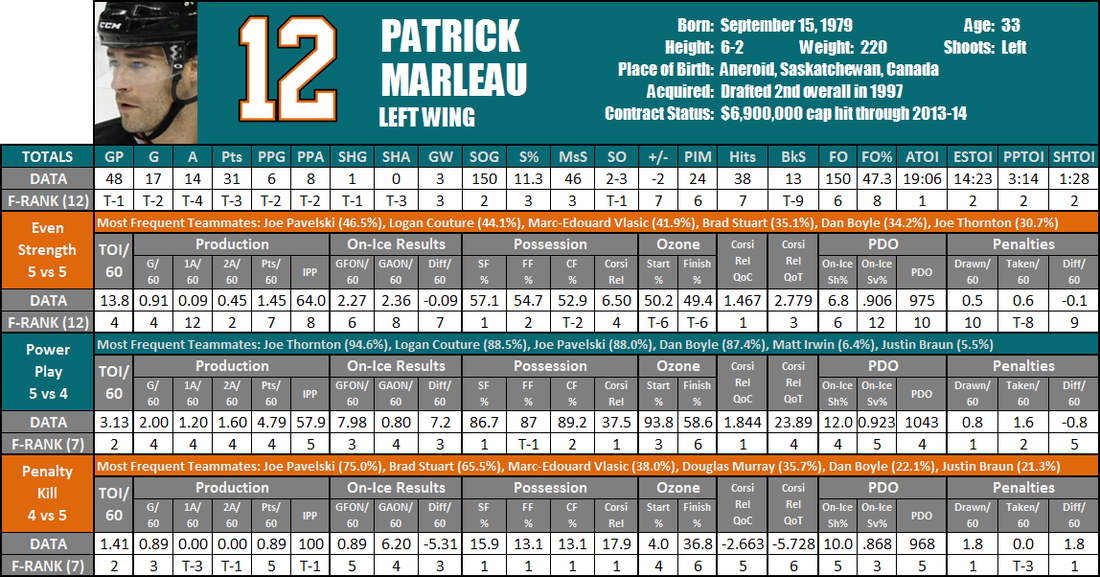 Marleau with and without his most frequent linemates: 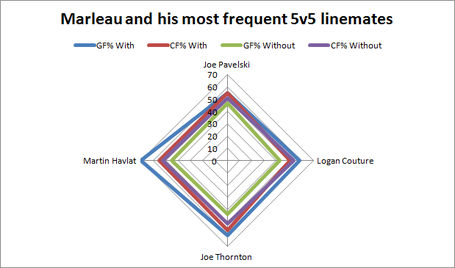 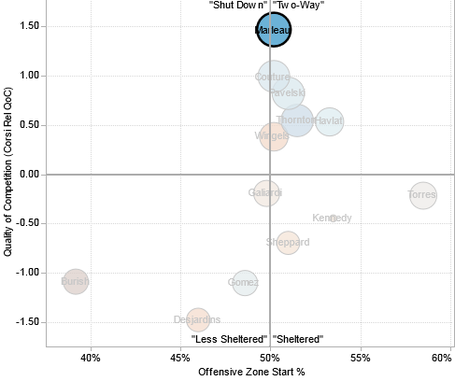 The Good: Hey, remember the opening of the season, when it seemed likely that Patrick Marleau would score 96 goals in a 48-game season? That was pretty awesome. Take THAT, Jeremy Roenick, and shove it in your gutless piehole.

Yeah. Then the bottom fell out of everything. And while some pundits probably want to blame that on Marleau -- along with the recent IRS scandal, the Red Wedding, and the Xbox One -- the entire team took a sleeping pill, creating a collective mess that lasted from February until March. However, as we all know, the team came together, and using new line configurations while breaking away from a cycle-dependent style, the Sharks evolved from lost franchise to team on the rise. During that time, we saw Marleau's role with the team tweak ever so slightly under new lines. Marleau's points-per-game never caught up to his blistering start, though he proved to have great chemistry with Logan Couture and was critical in a number of #39's big goals down the stretch.

In addition, Marleau was front-and-center in San Jose's back-from-the-dead penalty kill, essentially equaling Joe Pavelski as the top PK forward. (Michal Handzus actually led the team in PK TOI, but I think that's because he was too slow to change shifts.) He also faced the highest quality of competition; in the playoffs, his line was constantly used to keep the opposition's top line in check, allowing Joe Thornton's unit (and ideally Joe Pavelski's, though this obviously disintegrated with injuries and suspensions) the freedom to roll against lesser competition.

Oh, and speaking of the playoffs, Marleau's first-round performance was one of the main reasons the Vancouver Canucks as we knew them will be imploded. That, along with this GIF, has to be worth something.

Todd McLellan obviously trusts Marleau in all situations, no matter what pundits think, and the numbers back it up. Age will take away some of that scoring ability, but Marleau still has his speed and he remains under the radar as a strong two-way forward.

The Bad: OK, so that 96-goal season was a tad bit unrealistic. Still, 31 points in 48 games is disappointing (projected out to 52 points over a full season). Of course, Marleau was all over the scoresheet during the first round, and advanced stats showed that he performed strong against the Kings' top line. At 33, though, Marleau's days of being a 35-40 goal threat are probably over, though it'd be nice to see him hit the 500 goal mark over the next few seasons.

Like many of the Sharks during the doldrum period, Marleau fell into repetitive offensive patterns, particularly when he played on Joe Thornton's wing. Similarly, the power play's routines during that stretch were entirely predictable -- a trademark of when the Todd McLellan Sharks struggled. Moving Marleau to Couture's wing, along with the transition towards a more speed-based offensive system, was part of the formula for the team's late-season success.

While he'll never have an Alexander Ovechkin unplugged controller moment, there are times when you see a play and wonder why Marleau didn't take that extra few strides to reach the puck first -- or stop in front of the next rather than pass by. These types of things tended to happen earlier in his career but they still rear their annoying head from time to time.

The Future: With one year left on his big contract, the sensible projection is that Marleau will get a diminishing salary based on his age. Because of his natural skating ability and strong defensive instincts, it seems like the final stage of his career will have him transition into a two-way role with projected 40-60 point seasons -- essentially a second-line forward with power play time. From a roster depth perspective, this makes sense as the team changes from the team of Thornton/Marleau to Pavelski/Couture. There seems to be every reason in the world for both Marleau and Doug Wilson to WANT to stay in San Jose; whether or not that comes to fruition really depends on the final dollar value.

The Grade: All of the forwards take a grade hit thanks to the mid-season disaster. However, it's hard to complain about Marleau's start, finish, or playoff performance. In addition, he was key to San Jose's stellar special teams (excluding the mid-season team brain fart on the power play). If Marleau's overall offensive performance had been about 20% higher, he'd have an A. However, that prolonged slump winds up dragging down the other elements that Marleau brings, giving him a B.