We continue our look back at the performance of each player who ended the season with the team after skating in a significant number of Sharks games over the course of the year with a review of Raffi Torres' 2013 season.

Fear The Fin Player Card (click to enlarge; a glossary of terms used can be found here; all data courtesy Behind the Net, Hockey Analysis, Time On Ice, CapGeek and NHL.com; stick tap to Japers' Rink; statistics mostly accumulated for Coyotes but even-strength rate stats are ranked against Sharks): 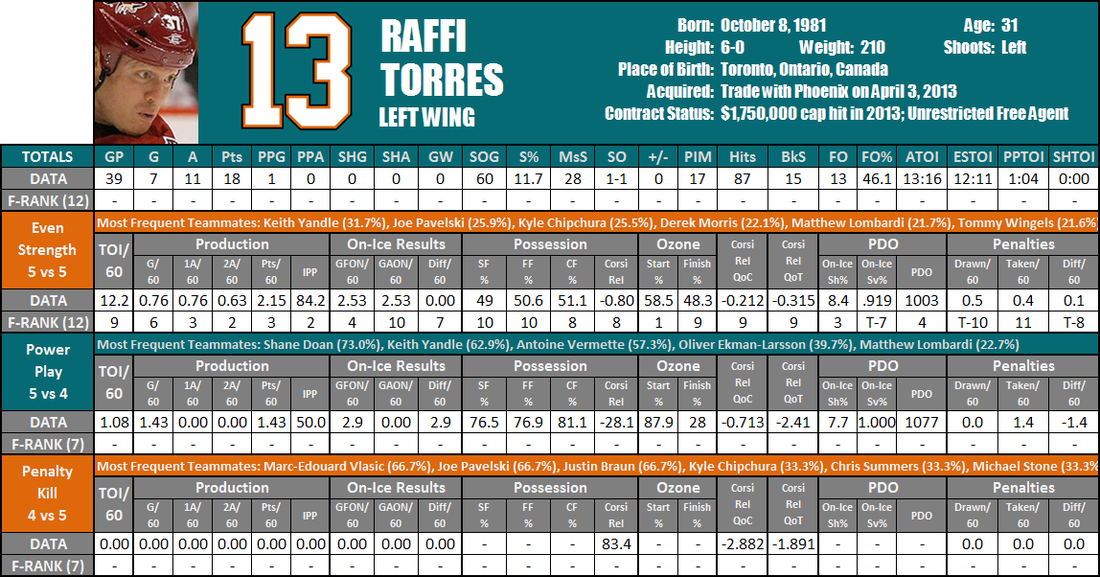 Torres with and without his most frequent linemates: 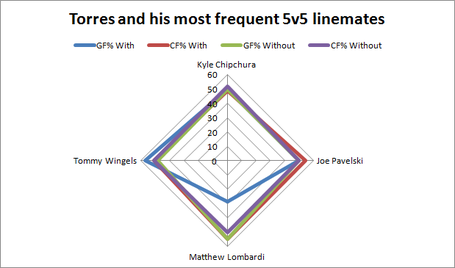 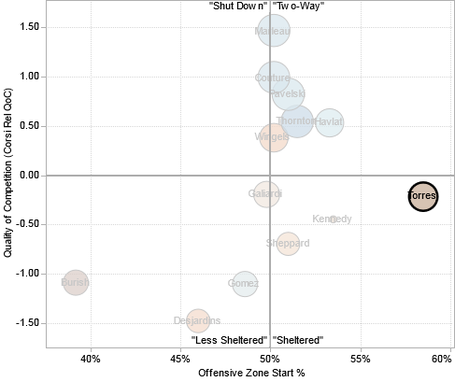 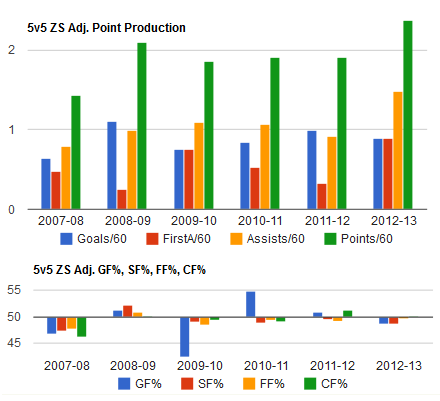 The Good: Considering his reputation, not merely as a cheapshot artist but as a bottom-six agitator best suited for an energy line, Raffi Torres had an extremely productive 2013 season. Torres scored north of two points per 60 even-strength minutes, good for 65th among forwards and ahead of players like Anze Kopitar, Claude Giroux and Pavel Datsyuk (also more than every Shark save Brent Burns and Logan Couture). What's particularly impressive is that this was far from a one-year outlier courtesy the vagaries of a shortened season. Especially on the goal-scoring front, Torres has always been a very productive player at evens and ranks 58th in goals per 60 since 2008 despite having played for five different teams over that span; this isn't a case of a player consistently leeching off superior linemates.

You wouldn't know it from looking at his boxcar numbers since he has almost never been used on the power play but Torres is a player who can legitimately drive offense in protected minutes at even-strength, which is invaluable to a team like the Sharks who have struggled to score 5v5 over the last two seasons and have particularly lacked offensive contributions from their bottom six. Torres provided that and more in his limited time in teal following Doug Wilson's last-minute trade deadline move to acquire him from the Coyotes. Alongside Joe Pavelski, Torres gave the Sharks a third line that was not only physically abrasive but a legitimate scoring threat. He also filled in very well on the team's first line against Vancouver in the playoffs after Martin Havlat re-aggravated a groin injury in Game 1. That series against the Canucks also featured Torres scoring a rather memorable and significant goal:

The Bad: He's Raffi Torres, which invokes justifiable derision from much of the Sharks fanbase given his history of line-crossing and elbow-launching, some of which has been at San Jose's expense. That came to a head (terrible pun slightly intended) in the second round of the postseason when Torres was suspended for Game 2 through 7 of the Kings series for a controversial hit to the head of Jarret Stoll which looks decidedly worse on the reverse angle than it did at initial glance. Regardless, it was pretty clearly a reputation call on the part of the league to ban Torres for the entirety of a playoff series and therein lies the risk inherent in having Raffi Torres on your roster. As much as, say, Martin Havlat is an injury liability, Torres is a suspension liability both because the league loves using him as a discipline piñata to prove they care about player safety without having to suspend anyone people actually pay or tune into NBC to watch and because Torres never learns his lesson.

The Future: Torres was acquired as a rental and becomes an unrestricted free agent on July 5. He earned $1.75 million last season which, frankly, is a pretty significant bargain for someone who's a safe bet to score 15 goals in an 82-game season with zero power play time. Having already invested $100,000 in him, the Sharks are presumably eager to retain Torres at a somewhat discounted rate, which should be possible given that many teams will likely be scared away by the fact that Torres' next elbow to an opponent's cranium could be his last. There are other options out there on the free agent market but given that the Sharks have historically had trouble attracting UFA talent, Torres fit in very well on a line with Pavelski down the stretch and a new deal likely won't carry a cap hit much greater than $2 million (representing one of the very, very few free agent contracts that might actually provide surplus value to the team signing it), they should definitely try to get a deal done as soon as possible, my personal distaste for Torres aside.

The Vote: Based on your expectations for him, view of his potential, the situations in which he was used and how he compared to players utilized in similar roles across the league, grade Raffi Torres' season below on a typical grading curve of A+ to F.