We continue our look back at the performance of each player who ended the season with the team after skating in a significant number of Sharks games over the course of the year with a review of James Sheppard's 2013 season. 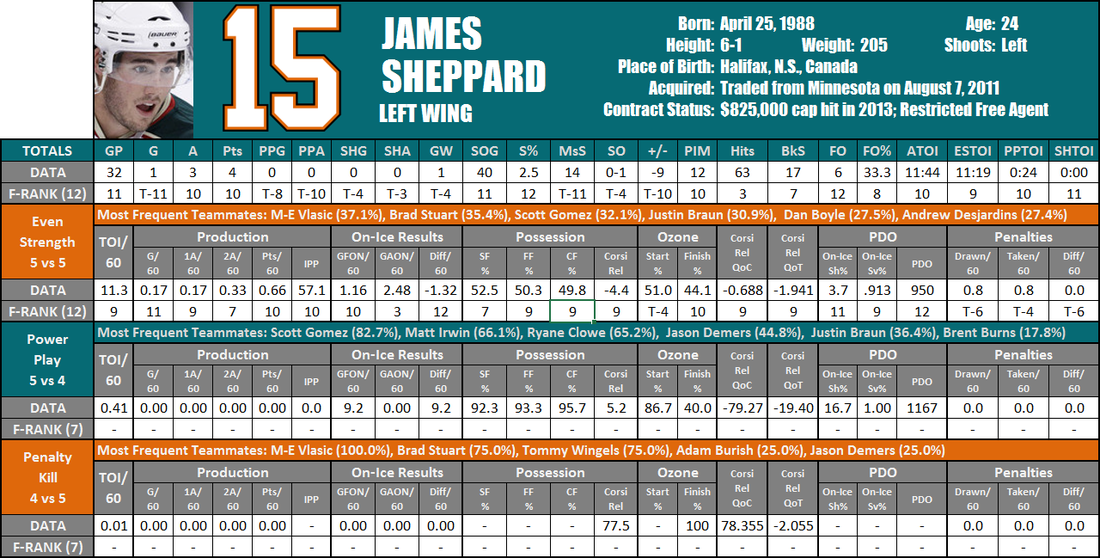 Sheppard with and without his most frequent linemates: 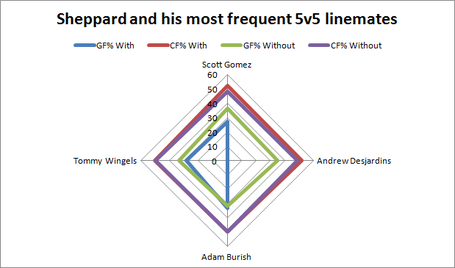 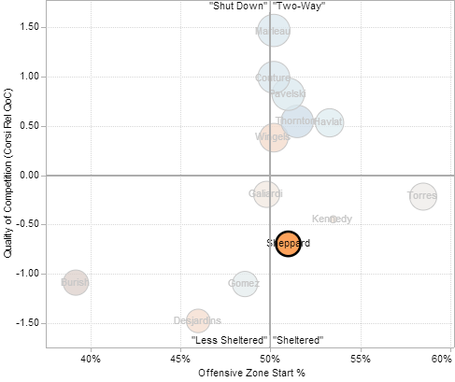 The Good: After successfully rehabilitating from the injury sustained in an ATV accident prior to being acquired by the Sharks, James Sheppard found himself as a regular in the Sharks lineup. He was one of the few San Jose Sharks who had started the year in Worcester, where he put up 23 points in 34 games. Once the lockout ended, Sheppard was called up and was able to bring a solid, if unspectacular, physical presence to the Sharks fourth line. Although 'hits' are certainly not the most reliable statistic, it is telling that Sheppard finished the year hitting people at about the same rate as Ryane Clowe and Douglas Murray.

The highlight of Sheppard's season has to be his one and only goal. It may not have been the prettiest, or most skilled, but you have to credit him for lighting the lamp for the first time since the 2009 season. And it ended up being a game winner against the Ducks.

The Bad: Despite that goal, and decent-for-his-role underlying numbers, his scoring rate seemed to dip big time. The Sharks just couldn't seem to put the puck in the net with Sheppard on the ice. At even strength, the Sharks only scored on 3.7% of the shots they took when Sheppard was out there. This is very problematic for a San Jose team that had almost no scoring depth outside the top six.

Defensively, James Sheppard was mostly invisible this season - take that as a good or bad thing. Nothing he did really stood out, but I wouldn't say he's a liability against other teams' bottom six skaters. Sheppard was a non-factor on the penalty kill, a role he had served in Minnesota. With plenty of experienced two-way forwards in San Jose, James only played a total of 16 seconds shorthanded.

The Future: According to CapGeek.com, a qualifying offer for Sheppard would cost the Sharks $866,250 - a minuscule increase on his cap hit. Considering his potential as a former top ten overall pick, I see absolutely no reason why the Sharks don't resign him, either for one year on his qualifying offer, or possibly on a 2 year deal for roughly the same amount. I think, with a bit more time to develop, he could turn into a quality 25 point depth forward within a couple years. Perhaps even sooner if he's able to spend more time on the left side of Joe Pavelski on the third line.

The Grade: Overall, James Sheppard played like a fourth line player for the Sharks. That was his role, and that's how he got paid. Is there room for improvement? Absolutely. But considering how terribly he was developed in Minnesota, and the fact that this was his first year back from injury, I think you have to be content. I'd probably give him a C or C-.

James Sheppard is worth his weight in gold based solely on his ability to create great memes. Fear The Fin seemed to know that from the start with 600+ comments on the post announcing his arrival in San Jose. With the last name Sheppard, we were sure to get multiple Commander Shepard Mass Effect photoshops. From there, we also got the phrase "Who the fuck is James Sheppard!?" and the resulting "Doctor Who the fuck is James Sheppard" photoshop. Plus, he totally looks like Neville Longbottom from Harry Potter. How many nerdy memes can this guy create? James Sheppard is the gift that keeps on giving. A+.