We continue our look back at the performance of each player who ended the season with the team after skating in a significant number of Sharks games over the course of the year with a review of Joe Thornton's 2013 season. 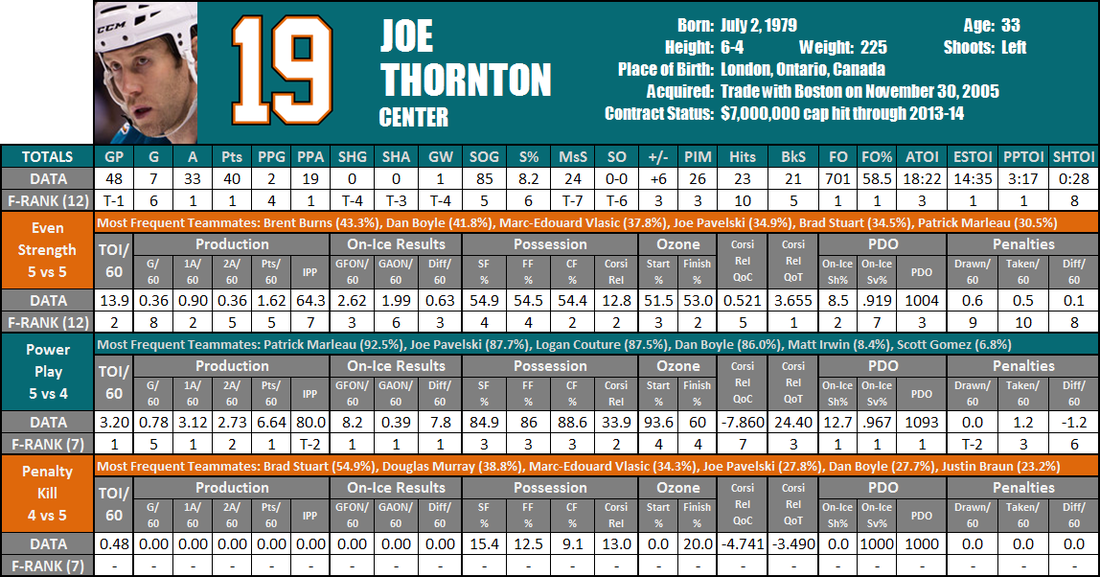 Thornton with and without his most frequent linemates: 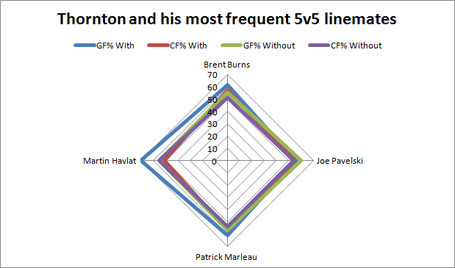 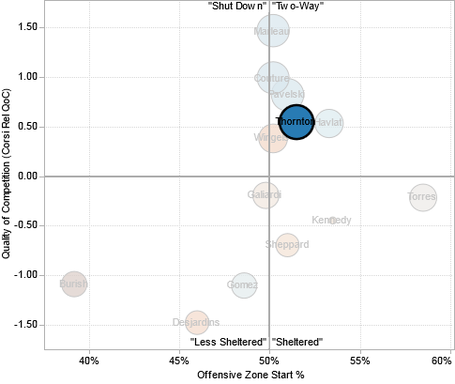 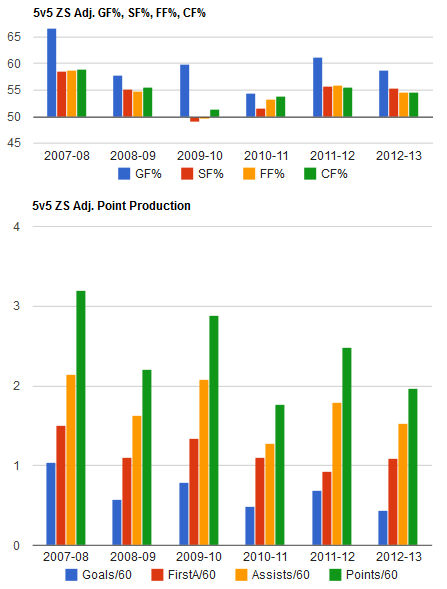 The Good: After nearly eight years in teal, it's pretty clear what the Sharks have in Joe Thornton. He's the engine driving the best power play in the NHL, an elite playmaker, one of the league's best faceoff men and, particularly in recent seasons, a legitimate two-way force. Despite a somewhat uneven campaign, Thornton led the Sharks in scoring for the seventh time in his eight seasons on the team, including his third straight as captain. He also turned in yet another fantastic postseason performance, easily the team's best forward against Los Angeles in the second round as the Kings simply didn't have an answer (well, apart from Jonathan Quick) for the size and speed of Thornton, Brent Burns and T.J. Galiardi. Speaking of Burns, Thornton deserves a good amount of credit for easing his transition to forward; converting to a position he hadn't played in a decade was presumably made much less difficult for Burns by having the luxury of being attached at the hip to one of the league's best passers.

The Bad: Particularly down the stretch in the regular season, there were quite a few nights when Thornton wasn't very effective on either side of the puck, underscored by his third period benching in Columbus on April 9th. That would have been somewhat more forgivable if the Sharks hadn't been hinging their entire gameplan on Thornton's line kicking ass at even-strength; with Logan Couture assuming Thornton's old power-versus-power role and Joe Pavelski drawing second-tier competition, Thornton and company were matched up against opposing bottom-six forwards on a regular basis in the season's second half but weren't territorially dominant or offensively productive enough a lot of the time. That changed late in the year and in the postseason but with Thornton having been essentially removed from the penalty kill and no longer drawing the tougher forward matchups, he needs to produce quite a bit more even-strength offense.

The Future: Should the Sharks look to re-sign Thornton when his contract expires next summer (and it seems likely they will), the three-year, $22.5 million extension agreed to between Pavel Datsyuk and the Red Wings this morning provides a convenient high-water mark; I'd expect Thornton to come in for at least a million per year less than that. While Jumbo is assuredly never going to be a 90-point scorer again and may not return to being the Selke-worthy two-way dynamo he was in 2011-12 (mostly because Couture has somewhat taken over that role for the Sharks), San Jose can certainly still get a ton of value out of any deal they sign Thornton to if he's used the way he was in the latter half of this regular season and into the playoffs. While playing protected minutes with Burns riding shotgun didn't always work out perfectly for Thornton in 2013, that group's effectiveness in the postseason certainly makes a compelling case that the experiment deserves to be revisited.

The Vote: Based on your expectations for him, view of his potential, the situations in which he was used and how he compared to players utilized in similar roles across the league, grade Joe Thornton's season below on a typical grading curve of A+ to F.