We continue our look back at the performance of each player who ended the season with the team after skating in a significant number of Sharks games over the course of the year with a review of Scott Gomez's 2013 season. 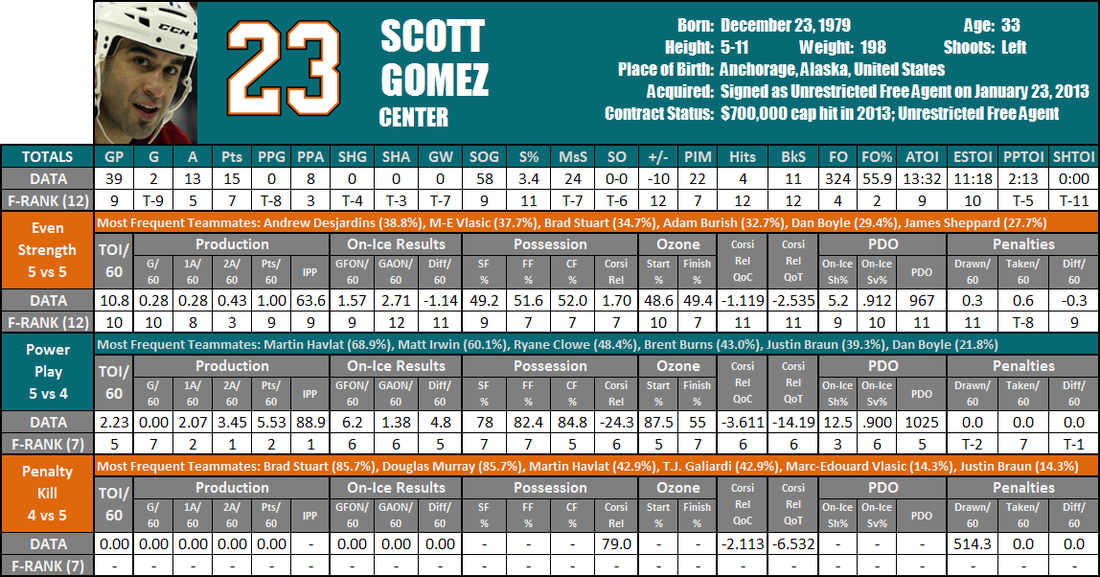 Gomez with and without his most frequent linemates: 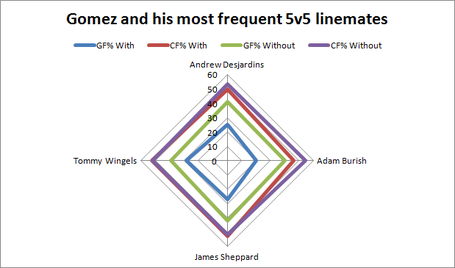 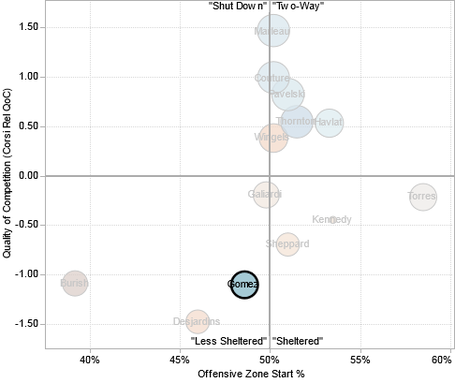 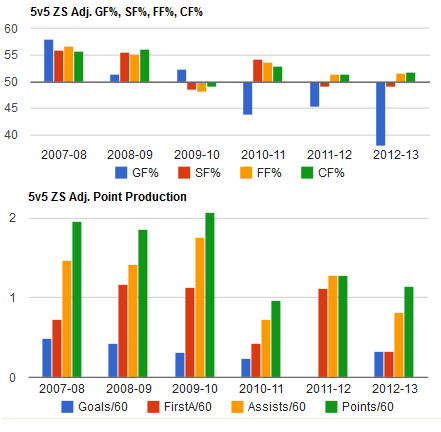 The Good: Signed for a pittance in a "Why the hell not?" move, Scott Gomez was brought in to provide depth to the bottom six forwards and the second power play unit. For a brief moment around late March/early April, Gomez looked like he was exactly what Sharks fans were hoping form when he came on board. During that stretch, Gomez passed creatively, pushed his linemates, created scoring chances on the second power play. This didn't carry forward into the season, and it took awhile to get there, so unfortunately it was the exception rather than the norm.

Given his late start, everyone's lack of a training camp, and getting stuck with non-scoring wingers, Gomez really was behind the proverbial eight ball all season, so that one stretch was really his only bright spot all season. By all accounts, though, Gomez was a great player to have in the locker room, passing along his lengthy playoff experience to younger players. Todd McLellan called him an additional coach on the bench, and that sort of thing doesn't show up on scoresheets.

The Bad: Of course, when you sign a playmaking center, you tend to believe that he will show up on the scoresheet. It's hard to tell whether or not Gomez's overall numbers and play were a victim of coaching bias. In a perfect world, Gomez would have been a playmaker on a depth scoring unit. However, most of the season saw him anchoring the fourth line with second-unit power play time. This meant a lesser quality of competition, but also a whole lot of time with wingers lacking in scoring prowess or speed. Gomez has always been a playmaker, not a two-way center, so putting him in a fourth-line role really limited his potential. One has to wonder how he would have fared if he had a full training camp and spent extended time with scoring wingers rather than Andrew Desjardins.

Physically, Gomez looked like a stronger skater than most people gave him credit for. However, despite showing a better skating speed than anticipated, he proved to be easy to push off the puck, and while his passing could still be creative, he often forced passes where there weren't any options.

The Future: Gomez feels like he's reclaimed his NHL career and can find a contract for next season. If that's the case, I'm not sure how he can possibly view this season as a success -- numbers don't lie. Perhaps his agent is lobbying that with a full training camp and more consistent scoring linemates, Gomez may still be valuable as a middle-six option. Whether that's with the Sharks or not is a crapshoot.

The Verdict: Gomez was a no-risk experiment that ultimately wound up doing very little for San Jose's depth chart. One could argue that this stems from the coaching staff's misuse/mistrust of his on-ice skills. Of course, it could also simply be that the game has passed him by. Despite coming in with low expectations, I still feel disappointed by Gomez and can't give him anything above a C- for the season.

The Vote: Based on your expectations for him, view of his potential, the situations in which he was used and how he compared to players utilized in similar roles across the league, grade Scott Gomez's season below on a typical grading curve of A+ to F.