We continue our look back at the performance of each player who ended the season with the team after skating in a significant number of Sharks games over the course of the year with a review of Dan Boyle's 2013 season. 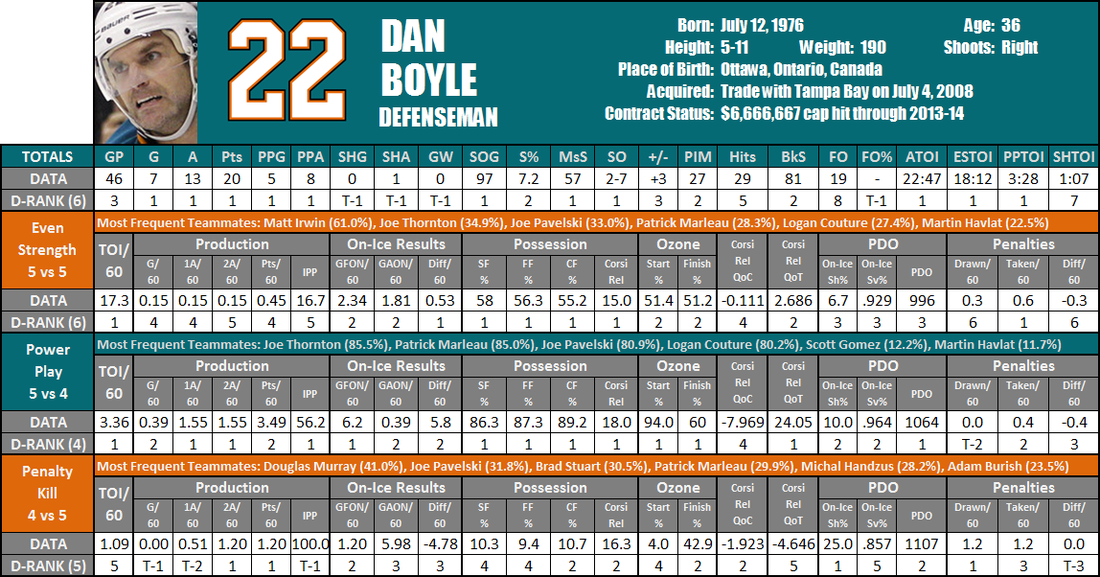 Boyle with and without his most frequent defense partners: 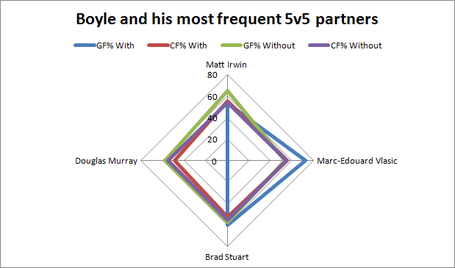 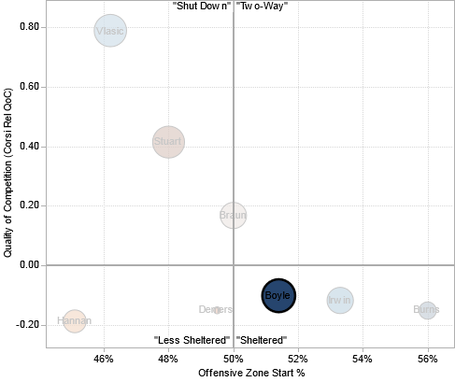 The Good: Strangely enough, the season in which Douglas Murray was dealt at the trade deadline and Brent Burns was converted to forward was also the year Todd McLellan opted to begin slowly easing 36-year-old Dan Boyle off the heavy, difficult minutes he had logged the two seasons prior. Both overall and at even-strength specifically, Boyle played fewer minutes per game in 2013 than he ever had previously in his Sharks career and did so against a lesser caliber of opposing forwards as well. The good news is that Boyle killed in the minutes he did play, leading the blueline in scoring and on-ice shot differential and helping elevate the unheralded Matt Irwin into resembling a capable top-four defenseman.

When he first arrived in 2008, Boyle assisted in transforming the San Jose power play from mediocre to the best in the league by far and continued to quarterback what was a very effective unit, especially in the postseason, this year. Speaking of the playoffs, Boyle saved his best work of the campaign for the spring, scoring three goals and eight points in 11 playoff games which shouldn't be a surprise considering Boyle's postseason track record in teal. Since coming to San Jose, Boyle has scored 44 points in 55 playoff games, an incredible 66-point pace over an 82-game season.

The Bad: It's difficult to really pick out specific negatives in Boyle's 2013 season since it doesn't make a whole lot of sense to fault him for playing fewer and less difficult minutes than he had in the past. He was terrific in the role he was assigned to which is essentially what you're looking for in any player. If we're picking nits, Boyle could have stood to be more productive at even-strength (which, really, can be said of almost every Shark this season) given that he scored fewer points in that game state than Irwin and Marc-Edouard Vlasic. A lot of that was that the Sharks scored on just 6.7% of their even-strength shots when Boyle was on the ice, something that's generally out of a defenseman's control.

The Future: If Boyle is willing to sign an extension similar to the 2-year, $10 million contract Sergei Gonchar signed in Dallas, there's no reason for the Sharks to turn him down, especially if the long-term plan is to keep Brent Burns at forward. Although Boyle's minutes and effectiveness at even-strength will likely decline at a steady rate going forward, he's the best power play defenseman in the league now that Nicklas Lidstrom has retired. That, along with his ability to provide some modicum of 5v5 offense on a blueline severely lacking in that area, should be worth a $5 million cap hit even when he's 39.

The Vote: Based on your expectations for him, view of his potential, the situations in which he was used and how he compared to players utilized in similar roles across the league, grade Dan Boyle's season below on a typical grading curve of A+ to F.