We continue our look back at the performance of each player who ended the season with the team after skating in a significant number of Sharks games over the course of the year with a review of Adam Burish's 2013 season. 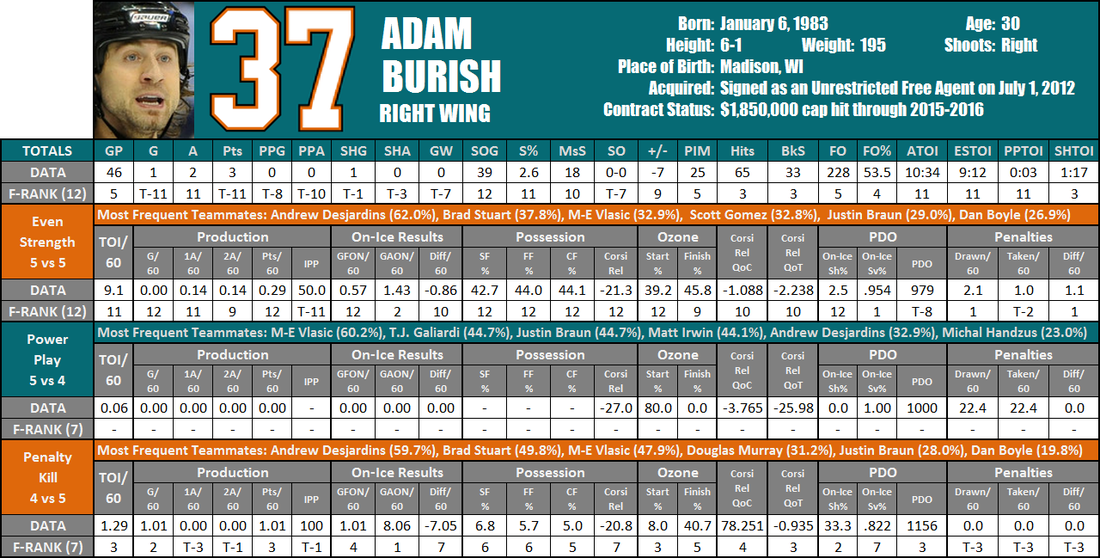 Burish with and without his most frequent linemates: 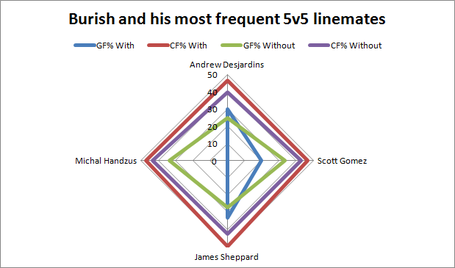 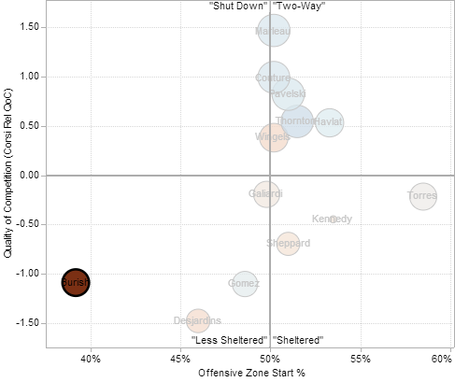 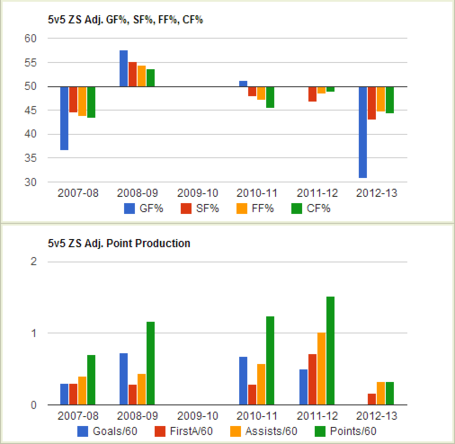 The Good: When Adam Burish was on the ice at even strength, the Sharks' opponents did not score much. And that was with Todd McLellan giving him very few offensive zone starts - to an almost absurd Manny Malhtora-like level. Opponents also seemed to love trying to hurt Burish; he was phenomenally good at drawing penalties 5-on-5 this year. He basically gave a man advantage once every three games to one of the best power play units in the NHL.

But the reason Adam Burish has an NHL job is his prowess on the penalty kill. He was given one of the most prominent roles on the Sharks' PK, and the unit was very good. This year, the Sharks finished 7th, killing off 85.0% of penalties. That's amazing considering where the team was the year before: 29th at 76.9%. Although most of that improvement probably has to do with coaching, I think Burish should still get a lot of credit.

What doesn't show up on the stats is how Burish helps the team in the dressing room. I've never heard anything but positives about Burish as a teammate. He's also one of the funnier Sharks on Twitter. Sometimes, these things collide.

The Bad: When Adam Burish was on the ice at even strength, the Sharks scored even less. As good as he was at "shutting down" other teams' fourth lines, he was still outscored quite a bit. A line with Burish and Andrew Desjardins (who he was almost stapled to this year), has no offensive ability whatsoever. It was disappointing that he didn't come anywhere close to the 14 or 19 points he put up with Dallas. The Sharks could have used that extra bit of secondary scoring. Burish was just about dead last in almost every possession metric. He wasn't put in a good position to succeed, but for nearly $2 million per year, you hope for a bit more. That, and a lack of chemistry, is why Burish was dropped from his third line spot that he held early in the season.

The Future: Unless there's some kind of drastic, unforeseen change, you'll be seeing plenty of Burish for a while. He still has 3 more years left on his contract. Potentially, he could be bought out using one of the compliance buyouts, but I don't really think it's worth it. Although it wouldn't count against the cap, if the Sharks bought him out this year, they would still have to pay him a total of $3.7 million not to play. Next offseason, that figure would drop to $2,466,667. I know Hasso Platner may have deep pockets, but it just doesn't make sense to buy him out - too much money for what could only hope to be a minuscule improvement. Honestly, it's a testament to Doug Wilson that this is the worst contract on the team that he personally gave out.

The Grade: When your good qualities at even strength are "the ability to shut down other teams' fourth lines" and "drawing penalties", your ceiling for grades is pretty low. To be fair though, he was a pretty good option on the penalty kill and is apparently an amazing teammate. And in the grand scheme of things, you really don't need much out of a fourth liner. So I'll give him a (possibly generous) C-.

The Vote: Based on your expectations for him, view of his potential, the situations in which he was used and how he compared to players utilized in similar roles across the league, grade Adam Burish's season below on a typical grading curve of A+ to F.