We continue our look back at the performance of each player who ended the season with the team after skating in a significant number of Sharks games over the course of the year with a review of Antti Niemi's 2013 season. 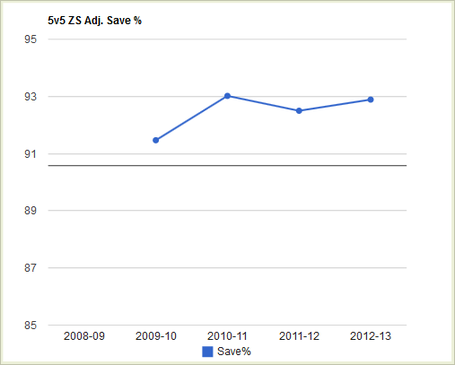 The Good: No player was more valuable to the Sharks this year than their Finnish netminder. Antti Niemi had what was easily the best season of his NHL career, earning a Vezina Trophy nomination as the league's best goaltender while posting a .924 SV% (6th in the league among goalies who appeared in at least 30 games), including a .930 showing at even-strength. With backup Thomas Greiss battling injuries and poor play and the Sharks as a whole starved for offense and thereby overly reliant on goaltending to win games, Niemi received a lion's share of the starts for the third straight season but still managed to excel throughout. Particularly during their offensive swoon in February, when San Jose scored just 15 goals in 12 games, Niemi often represented the only reason the Sharks remained competitive to any extent.

Niemi appeared to substantially improve his rebound control as well as his lateral movement, particularly on the penalty kill where he posted an .883 shorthanded SV%, a massive step up from the .858 clip he had stopped pucks at when the Sharks were down a man during his first two seasons in teal and the biggest reason (along with Larry Robinson's systemic improvements) San Jose went from terrible to great on the kill. As terrific as Niemi was in the regular season, he was even better in the playoffs, posting a .930 SV% (.944 at even-strength) in 11 postseason games and nearly out-dueling Jonathan Quick in the second round.

The Bad: Um, pass? There's really nothing to complain about with regards to Niemi's 2013 season, although perhaps that has a good deal to do with it being a shortened campaign; every goalie experiences peaks and valleys and it's likely we would have seen another valley or two from Niemi had he received 25 more starts. But in terms of what actually transpired, I would really have to contort myself to come up with legitimate complaints. Niemi did have a 9-game stretch in mid-March when he posted an .888 SV% and was pulled twice but every goalie has runs like that one. Aggregate performance is what matters when evaluating this position and Niemi killed it by every reasonable measure.

The Future: One of the most important points that needs to be made here is that Antti Niemi's banner year wasn't nearly as out of left field as many made it out to be. Niemi posted a .924 SV% over a 1220-shot sample, which is terrific, but he also posted a .927 SV% over a 1480-shot sample from December 2010 through April 2011. He's done this before and, as much as predicting future goaltending performance is voodoo, there's a mounting pile of evidence that Niemi is a very good starting goaltender. Here's how his even-strength SV% since joining the Sharks stacks up against all other goalies who have played at least 5000 minutes over that span:

Those are elite numbers and it's becoming less and less likely they're merely the result of the vagaries of a small sample. As beloved as Arturs Irbe and Evgeni Nabokov are in Sharks lore, Niemi has a legitimate chance to cement himself as the best goalie in franchise history with a few more seasons at a similar performance level to what he's provided the Sharks so far. There's little reason to think he isn't capable of that and the only question surrounding the San Jose crease heading into 2013-14 is who claims the honor of receiving a paltry 10-15 starts as Nemo's backup.

The Vote: Based on your expectations for him, view of his potential, the situations in which he was used and how he compared to players utilized in similar roles across the league, grade Antti Niemi's season below on a typical grading curve of A+ to F.