We continue our look back at the performance of each player who ended the season with the team after skating in a significant number of Sharks games over the course of the year with a review of Logan Couture's 2013 season. 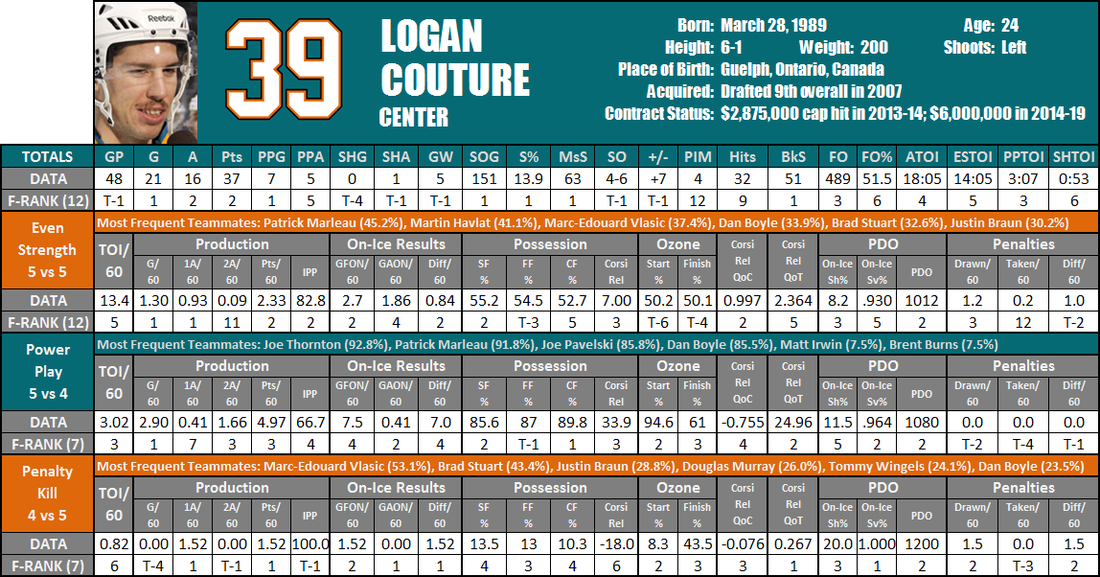 Couture with and without his most frequent linemates: 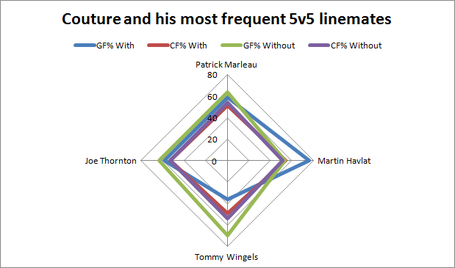 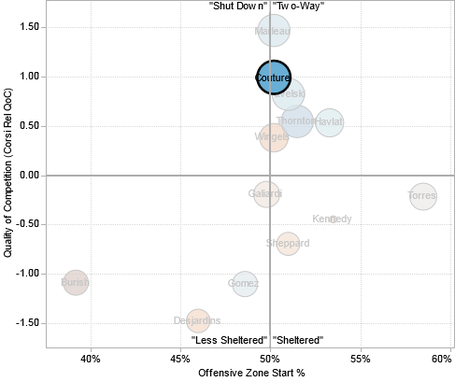 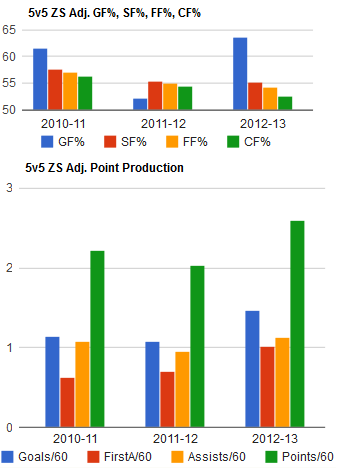 The Good: He set the bar awfully high with his first full season in the NHL, scoring 32 goals and earning a Calder Trophy nomination, but somehow Logan Couture keeps raising it with each successive year. Couture's 2013 season was his best so far, not only because he led the Sharks in goal-scoring with 21 during a shortened campaign but because he finally displayed the ability to thrive in the deep end of the pool. Playing largely with Patrick Marleau on his wing, Couture was matched up against opposing teams' top lines for nearly the entire second half of the season and into the playoffs, outplaying some of the best centers in the league far more often than not. In the process, he opened up easier minutes for Joe Thornton, Brent Burns and Joe Pavelski to exploit. It was a strange but encouraging role reversal from the prior year when Thornton and Pavelski had paired to take on the toughs and ease the burden on Couture's line.

Couture was also one of the very, very few Sharks to consistently produce offense at even-strength. Despite being deployed in the aforementioned difficult minutes, he led the team with 14 goals and 24 points at evens, three goals clear of Pavelski and five points ahead of Thornton. Even-strength scoring was far and away the Sharks' biggest issue last season as they finished 28th in the league in that category but Couture was the only forward (besides Brent Burns during his stint up front) who deserves no share of the blame for that. Of course that doesn't mean he was a slouch on the power play as Couture finished first on the team in goals with the man advantage as well. Small sample caveat and all that but Couture's performance on the penalty kill was also pretty incredible: during his 40 minutes of 4v5 ice time, the Sharks actually outscored their opponents 1-0.

The Bad: Along with most everyone else on the team, Couture's even-strength scoring completely dried up in the postseason, largely due to the fact that the Sharks scored on just 3.5% of their 5v5 shots when he was on the ice in the playoffs. Roberto Luongo and Jonathan Quick are pretty good at their jobs and the Sharks' (as well as Couture's) torching of Cory Schneider mostly came on the power play. There isn't much else to really complain about. Couture could stand to improve a touch in the faceoff circle although his enviable possession skills makes whether or not the Sharks start with the puck when he's on the ice mostly inconsequential; they'll get it back at some point, and keep it when they do.

The Future: After signing a 5-year, $30 million contract extension last week, Couture is in it for the long haul in San Jose. He'll outlast most of the current core and likely be awarded the captaincy at some point in the future (though I'd prefer that nod going to Pavelski, perhaps as a negotiating chip in contract talks). But more importantly, the second half of this season and the playoffs provide pretty compelling evidence that the franchise definitely sees him as their long-term first-line center in the rapidly approaching post-Thornton era, and therefore the primary piece to build around. And why wouldn't they? He plays in every situation, scores at an impressive clip and proved for much of this year that he can be relied upon to tilt the ice in the Sharks' favor even when matched up against the league's best.