We continue our look back at the performance of each player who ended the season with the team after skating in a significant number of Sharks games over the course of the year with a review of Marc-Edouard Vlasic's 2013 season. 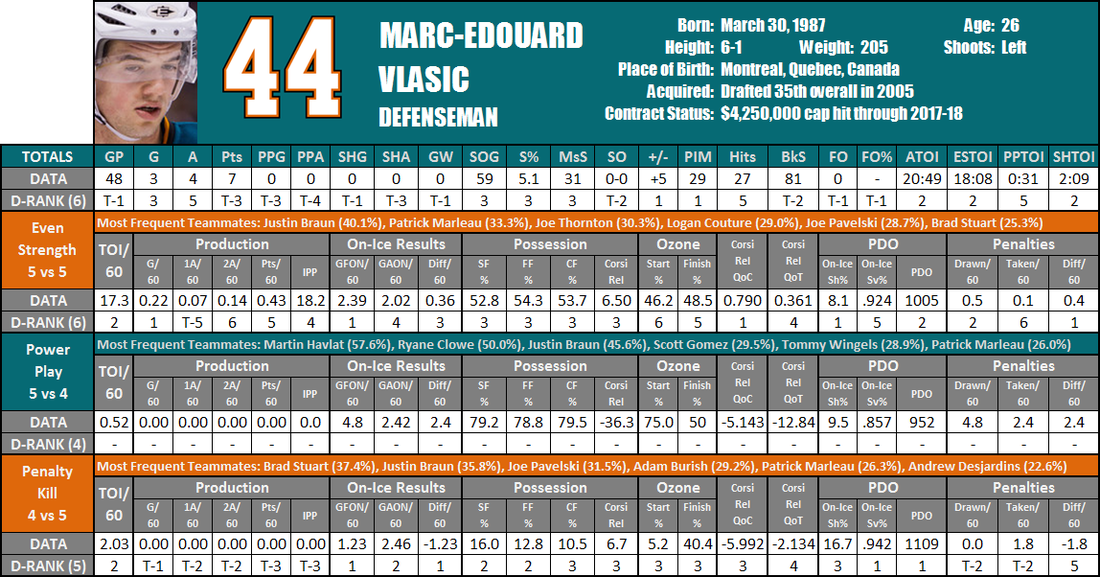 Vlasic with and without his most frequent partners: 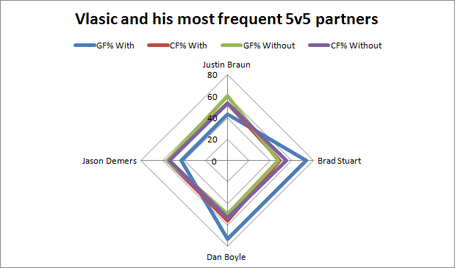 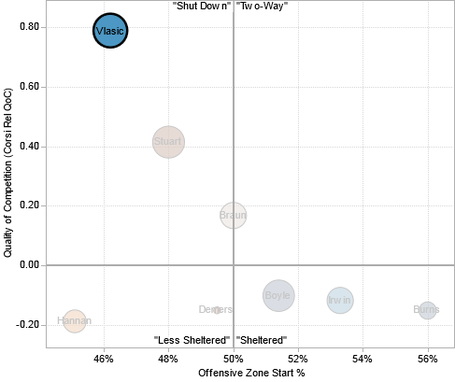 The Good: It's somewhat difficult to put into words what makes Marc-Edouard Vlasic such an effective defenseman because his playing style doesn't easily lend itself to the adjectives usually reserved for hockey's best blueliners. Vlasic isn't a particularly physical player, he doesn't possess a hard shot, he isn't a terrific puck-mover and he doesn't contribute on the power play. Despite all of that, Vlasic was easily the best defenseman on a Sharks team that gave up fewer goals than all but five others in 2013, arguably putting the finishing touches on his gradual development into one of the best shutdown defensemen in the NHL. Stylistically, Vlasic has long been labeled "Nicklas Lidstrom without the offense" which is a daunting and rather unfair comparison for any player to live up to but there were some really positive signs on that front this season.

Among defensemen who appeared in at least 35 games this year, began more than 50% of their 5v5 shifts in the defensive zone and faced an above-average quality of competition (0.5 Corsi Rel QoC or greater), only Zdeno Chara, Kris Letang, Johnny Boychuk and Dan Hamhuis finished with higher on-ice shot differentials than Vlasic. That's elite company (apart from Boychuk, who played about half his minutes with Chara) and it's even more impressive because Vlasic was separated from Dan Boyle this season and spent most of the year carrying around inferior partners in Brad Stuart and Justin Braun. Braun in particular deserves credit for the success he and Vlasic enjoyed together down the stretch and into the playoffs but Vlasic is clearly the main reason the coaching staff was comfortable pitting those two against the Sedins and Anze Kopitar in the postseason (even while Vlasic was playing through a foot injury) and why that tandem ultimately neutralized both top lines. Vlasic was also amazing on the penalty kill; in his nearly 100 minutes of 4v5 ice time, the Sharks were only outscored 4-2.

The Bad: At 26 years old, Vlasic still has plenty of his prime years ahead of him but he's also probably not going to magically develop an offensive game from here on out. His seven points in 48 games this season pro-rate to about 12 over a full year which would have been his lowest output ever in the NHL. Still, the game Vlasic plays means he's somewhat reliant on other players for his offensive numbers; the Sharks as a whole struggled mightily at even-strength this season and Vlasic's point total is more a reflection of that than a driver of it.

The Future: It isn't hyperbole to suggest that the future of the Sharks' defense rests on Vlasic's shoulders at this point. Particularly if Brent Burns remains a forward, Boyle's aging and potential free agent exodus leave Vlasic as something of a lone wolf on the San Jose blueline. He'll be entrusted with the toughest minutes, both at even-strength and on the penalty kill, next season as well and probably each of the four seasons after that for which he's under contract. Thankfully, there's a lot of evidence that he's more than up to the task, even if paired with someone like Braun or Jason Demers.