With the season over, we begin our post-mortem with a look back at the performance of each player who ended the season with the team after skating in a significant number of Sharks games over the course of the year. We begin with Jason Demers. 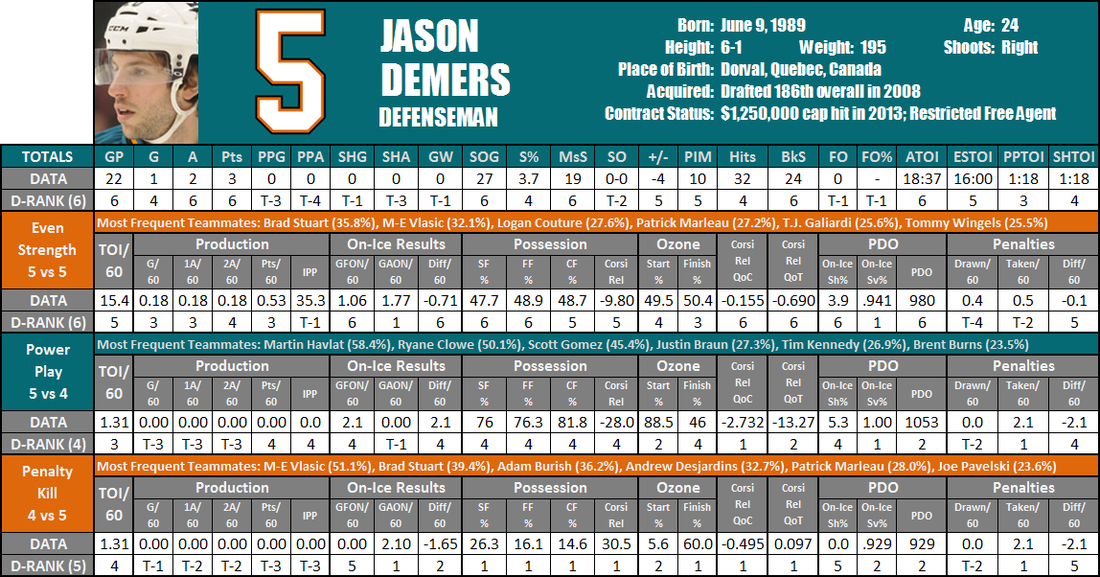 Demers with and without his most frequent defense partners: 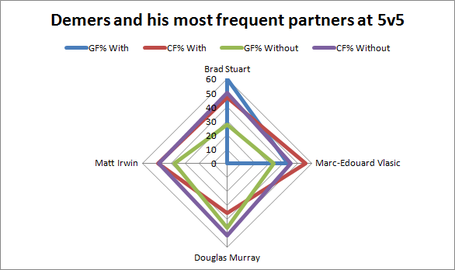 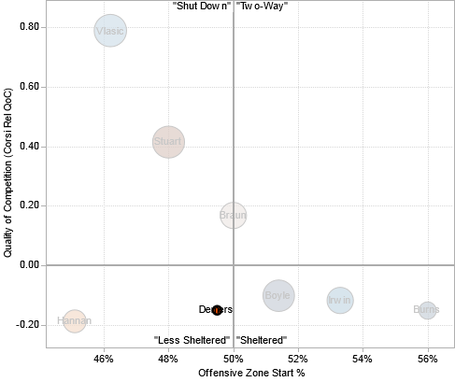 The Good: When he drew into the lineup, which itself was a relatively rare occurrence, Jason Demers at times showed flashes of the defenseman who proved to be one of the Sharks' best two seasons ago. The skillset that once made him a valuable piece of the puzzle on the San Jose blueline—most notably his skating and ability to engineer a clean breakout—is largely still intact and was on full display in his final run of consecutive games with the team prior to sustaining this headshot from Detroit's Cory Emmerton. In the six games prior to that incident, which surrounded the trade of Douglas Murray, Demers was on the positive side of the puck possession ledger in close situations playing largely on a pairing with Marc-Edouard Vlasic. As the second chart above indicates, that duo posted some very auspicious underlying numbers together all year and have a history of success as a pairing, most memorably in the 2011 playoffs.

Demers was also an overlooked contributor to the Sharks' meteoric rise in penalty killing efficiency. Although somewhat relegated to mop-up duty, Demers still averaged well over a minute per game shorthanded and was extremely effective in that role, on the ice for fewer shots and goals against per minute than any of the team's other four defensemen who averaged a minute or more on the kill. It's entirely possible those encouraging numbers are the result of small sample randomness and the effect of Demers spending over half of his shorthanded ice time alongside the team's best penalty killer in Vlasic, but it's worth noting he was similarly capable in 4v5 situations during the 2010-11 season. It's possible that under the tutelage of Larry Robinson, Demers can at least develop into a steady second unit option.

The Bad: Prior to the season, we called this a make-or-break year for Demers' Sharks career. And while it's tough to draw any concrete conclusions about a player's future trajectory based on just 22 games, the mere fact that Demers had difficulty earning a regular spot in the lineup and was decidedly surpassed on the depth chart by Matt Irwin and Justin Braun likely tilts the dial towards "break." Demers was never the same after returning from his second injury-related absence of the season (the first coincided with the start of the campaign after he suffered a wrist injury during the lockout) and his third kept him out of postseason action with the exception of his forgettable stint up front in Game 5 against Los Angeles. It's difficult to say with any confidence whether it was due to after effects of a presumed concussion or a simple inability to successfully partner with Brad Stuart but that pairing was wildly inconsistent down the stretch and frequently hemmed in their own zone.

It doesn't bode well for Demers if his struggles alongside Stuart prove to be a long-term phenomenon because Stuart certainly isn't the one who stands to lose a roster spot as a result. With the top four all but solidified as featuring Vlasic, Irwin, Braun and Dan Boyle (unless Brent Burns is converted back into a defenseman, which would be even worse for Demers), a Stuart/Demers third pairing has to work at even-strength in order for Demers to justify his spot in the lineup. To regain the coaching staff's trust, Demers needs to improve his decision-making which at times led him to administer a needless hit in the neutral zone that created an odd-man rush which Francois Beauchemin scored on or clear a loose puck right onto the stick of Chuck Kobasew in front of a gaping net. He also needs to have a much better year offensively to provide value to a blueline largely bereft of offensive creativity outside of Dan Boyle.

The Future: Demers will be a restricted free agent this summer coming off a season in which he earned $1.4 million in salary while carrying a $1.25 million cap hit. It's doubtful that he's in a position to command anything close to a substantial raise and, as a result, could remain an attractive option for the Sharks to re-sign as a sixth defenseman despite two disappointing seasons. The team will be cutting it pretty close to the salary cap's declining upper limit and having Demers in the mix as a cost-controlled third pairing option beats wading into a shallow free agent pool. It also helps that he likely doesn't carry much trade value at this point, although it's certainly possible a team like Philadelphia overpays for his right-handed shot and puck-moving ability. For those reasons, I'd be surprised to see him dealt unless it's as part of a larger package the Sharks use to move up in the draft.

The Grade: Perhaps it's patently unfair to continue judging Demers against the standard he set for himself with his sparkling 2010-11 season but someone who has the tools and demonstrated the capability to be a top-three defenseman on a division winner and conference finalist just two years ago has to turn in better seasons than this one. I'm inclined to cut Demers some slack due to injuries and being shackled to Douglas Murray for much of the season's first half but his lack of offense and mediocrity on both sides of the puck at even-strength merit a C-.

The Vote: Based on your expectations for him, view of his potential and the situations in which he was used, grade Jason Demers' season below on a typical grading curve of A+ to F. If he had the best season you could possibly imagine him having, give him an A+. If he was about where you expected him to be, give him a C+ or C and if he had the worst season you could envision him having, give him an F.