San Jose officially announced the re-signing of their backup goaltender and shored up their depth at the minor league level.

Share All sharing options for: Sharks re-sign Stalock and Pelech, bring back Davison

According to the wonderful CapGeek, the ink had dried on these contracts days ago but the Sharks made official earlier today their re-signing of presumptive backup goaltender Alex Stalock and AHL facepuncher Matt Pelech along with the far more interesting move of bringing back defenseman Rob Davison. It's unlikely Davison ranks higher than ninth or tenth on the organization's defensive depth chart but it's always nice to see a familiar face; Davison was selected by the Sharks in the 4th round of the 1998 draft and played 176 games for the team over parts of five seasons, 69 of which were in that magical 2005-06 campaign. Of course, Davison's most notable Sharks-related career moment came when he was a member of the New York Islanders and did this to a goalie Doug Wilson somehow turned into Logan Couture less than a year prior. Good times. Davison and Pelech signed matching one-year, two-way contracts worth $550,000 at the NHL level. Stalock's two-way deal earns him $625,000 in the big leagues. 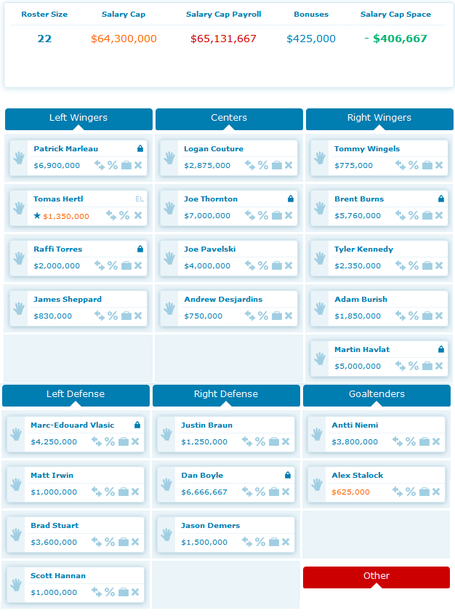 While the Sharks are about $400,000 over the upper limit after accounting for the bonus cushion, the expectation is that Martin Havlat will begin the year on long-term injury reserve which should get them under the wire. The main takeaway here is that, barring a groundbreaking trade that likely isn't happening, the Sharks are just about finished shopping for the summer. Given that NHL.com lists Douglas Murray as one of the best remaining free agents on the market, maybe that's a good thing.