After teasing them for the last two days, the Sharks finally reveal the new jerseys for the 2013-14 season.

There were rumors about the Sharks getting new uniforms, notably from Icethetics who noticed the Sharks listed in Reebok's holy book of uniform changes. Those rumors were all but confirmed on Sunday, when the Sharks started tweeting out teasers of a new uniform. This morning, they finally revealed what they call The Next Wave, a new uniform that will the franchise's fourth set. 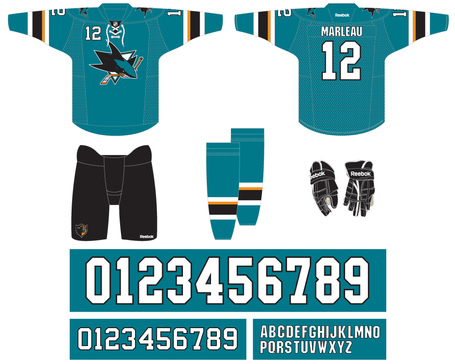 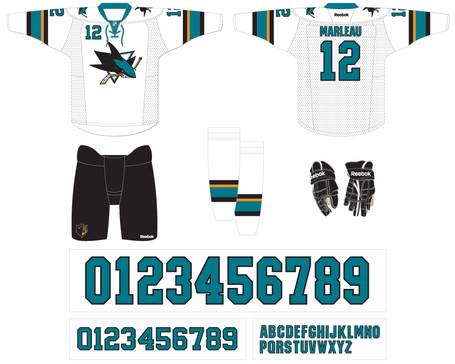 One of the most notable things about the new jerseys was the removal of the black yoke, which was teased last night. It keeps it in line with what the Dallas Stars and Carolina Hurricanes have released this summer - a more simplified jersey design, rather than piping and stripes everywhere, such as what a lot of teams had when the Reebok Edge system was first instituted back in 2007-08.

The lack of bottom striping on the jerseys brings them closer to the Black Armor jerseys. It also, as anyone who has held both a home Sharks jersey in one hand and a Black Armor in the other, lightens the jersey considerably. Which was one of the main things GM Doug Wilson and COO John Tortora talked about in this video about the design process:

With the Sharks players preferring to wear their Black Armor during the playoffs the past few seasons, citing the difference in weight, these jerseys were meant to convince the players to wear their normal homes in the post-season.

There are also a few other minor changes to the jerseys. There's the obvious addition of the laces, which goes with the recent trend of new vintage-inspired jerseys. The arm stripes go from having orange piping on either side of a black or teal stripe to just one orange stripe on top. This asymmetrical look will mess with those with OCD, but will help remove some of the orange for the haters while keeping some of it to offset the orange in the logo.

Likewise, the numbers are no longer outlined in orange, and instead just black. Death to orange! Sort of! The away white also has a teal collar, which I personally think is a nice addition and makes the clean look of the jersey pop.

The jumping shark logo remains in place as the shoulder patches, once again leaving the awesome fin logo out to dry. There are also still numbers on the front, which I am sure some people will complain about. However, with the removal of the black yokes, the front of the jerseys will have more real estate for patches instead of all being crowded under the black. In this case, I think it works.

My reaction? I love them. They're noticeably lighter, which was the goal for this new design. They're clean, and the asymmetrical piping gives them a more unique look than the overly traditional old uniforms (the striping and yokes is pretty much as traditional as you can get without being the Montreal Canadiens). The home uniform completely embraces the teal and makes no apologies about it, while the away uniform looks like a clean slate.

What say you? Love em, hate em, or don't really see the point of them?