Five questions for the Sharks to answer in training camp

With training camp beginning today, we ask five questions the Sharks will need to answer before the 2013-14 regular season gets underway.

Share All sharing options for: Five questions for the Sharks to answer in training camp

After a largely uneventful but mercifully shortened offseason, the Sharks will take the ice today for the first time since their Game 7 loss to Los Angeles for the start of training camp. Here are five questions they will need to answer sometime before hosting Vancouver in their regular season opener about three weeks from now.

1. Who starts the season on Patrick Marleau and Logan Couture's right wing?

After a horrific offseason surgery (I'd advise against running a Google image search on "bilateral pelvic floor reconstruction"), winger Martin Havlat has encouragingly resumed skating but is still expected to begin the year on injured reserve. That means the Sharks will enter the 2013-14 season without the only forward who enjoyed a successful stint on Patrick Marleau and Logan Couture's right wing this year.

Joined at the hip by Todd McLellan at the nadir of San Jose's season, Marleau and Couture proved to be a formidable tough-minutes tandem who kept opposing top lines in check while generating their share of scoring opportunities at even-strength. Their success as a unit was a significant factor in guiding the Sharks out of murky waters and eventually to a Game 7 against the defending champions in the second round of the playoffs. But it wasn't entirely smooth sailing; Marleau and Couture had their struggles down the stretch and even in the postseason and those struggles generally tended to coincide with times when Havlat wasn't the right wing completing that line.

In all, regular season and playoffs combined, Marleau and Couture shared the ice at even-strength for 406:11. Around 139 of those minutes came with Havlat on the ice as well, while about 131 came with Tommy Wingels, 64 with Joe Pavelski, 44 with Raffi Torres and the remainder with a combination of Tim Kennedy, Ryane Clowe and a host of other forwards in the middle of a line change. Analysis of how the Sharks fared when Marleau and Couture were on the ice with each of those four most frequent right wings, measured by the percentage of all goals scored and shots attempted by San Jose in those spans, paints a picture of Havlat's importance to that duo's success. 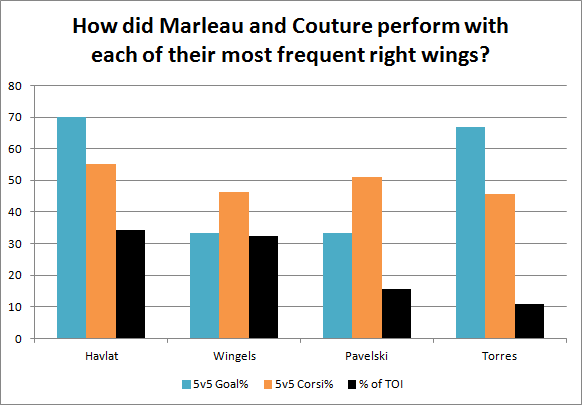 We're admittedly slicing an already-small sample even thinner but, when Marleau, Couture and Havlat were on the ice together as an even-strength forward line, the Sharks scored 70% of the goals and earned 55.2% of the shot attempts. It's awfully unlikely that goal ratio would be anything near sustainable over the long haul but the trio's excellent possession numbers together, made all the more impressive by the fact that they were largely deployed against opposing teams' best forwards, seems to lend credence to the notion that two shoot-first players in Marleau and Couture are best served by a linemate who can distribute the puck and make plays like Havlat. Torres and Wingels are likely the primary candidates to fill in for the Czech winger (although one assumes newcomers Tyler Kennedy and Tomas Hertl will get long looks in this spot as well) and neither quite fits that bill. McLellan has already indicated that he won't be splitting up Marleau and Couture so the battle to determine their final linemate looks to be the most intriguing one in training camp.

Moreso than the other four questions, the answer to this one is contingent on what happens when the Sharks start playing games that count. Converting Brent Burns to forward, uniting Marleau and Couture and having Joe Pavelski center the third line were the strategic changes that merited the most digital ink last season but just as important might have been the coaching staff's crafting of a shutdown defense pair not comprised by two old, slow and immobile dudes. Marc-Edouard Vlasic and Justin Braun excelled as a tandem in the latter half of the season and into the playoffs. Unlike the ill-fated Douglas Murray/Brad Stuart pairing, Vlasic and Braun were capable of turning play the other way against some of the league's best forwards and were responsible for shutting down the Sedin twins and Anze Kopitar in the playoffs.

Vlasic is a known quantity at this point; he's one of the best defensive stoppers in the league coming off a particularly fine season. But with just 135 NHL games under his belt, and only a few dozen spent logging heavy minutes, there's still a good deal of uncertainty in Braun's future projection. The team probably needs a safety valve ready in case he's unable to handle the rigor of facing the likes of Patrick Kane, Taylor Hall and Corey Perry on a nightly basis. 37-year-old Dan Boyle isn't an ideal choice but he and Vlasic were excellent together in this role two seasons ago and, frankly, he's the only viable Plan B the Sharks have unless Jason Demers turns back the clock to 2011. The issue is that bumping Boyle up in the lineup turns the team's second pairing from a strength to a weakness, with Stuart and Braun likely forming that tandem in lieu of Matt Irwin and Boyle, who feasted on soft minutes a season ago. Hopefully Vlasic and Braun pick up right where they left off last spring but inspecting the rest of the blueline for potential replacements is one of the things the coaching staff should be looking to do as camp gets underway.

3. Who's going to back up Antti Niemi?

When Thomas Greiss signed with the Phoenix Coyotes, the widespread assumption was that Alex Stalock would take his spot and assume backup goaltender duties for the coming season. Not so fast, says Todd McLellan:

"To say that Alex has the inside edge on Harri would be unfair to both of them," McLellan said. "We know where [Antti Niemi] stands, and he looks good. Nemo can’t play 82 games, and it’s not a lockout season, so whoever wins that other job will get a chance to play and really establish themselves in the league."

Harri Sateri, the club's fourth-round pick in 2008, has spent time becoming acclimated to the North American game in Worcester each of the past two seasons. Where Stalock's ascendancy to full-time NHL backup was previously a foregone conclusion, McLellan's comments to the media muddles things a bit but it's unclear whether they were intended to indicate Sateri has a real shot at this or to motivate both goaltenders ahead of camp. Probably both.

What is clear is that Stalock has had the superior AHL career despite sustaining (and recovering from) a severe injury back in 2011. Stalock has posted a .907 save percentage on 2459 AHL shots while Sateri has compiled a .901 SV% on 2253 shots. What Sateri does have going for him is an excellent track record in the SM-liiga, Finland's top men's league, where he posted save percentages of .921 and .915 in the 2008-09 and 2009-10 seasons, respectively. He's also Finnish and it says right there in the NHL rulebook that goalies from Finland can't be scored on (offer void if Vesa Toskala). Still, it seems like this is Stalock's job to lose. Sateri may be better served by more North American experience anyway and he certainly wouldn't get that as Niemi's backup.

4. What does the power play's second unit look like now?

At different points in the 2013 season, Ryane Clowe, Martin Havlat, Scott Gomez and T.J. Galiardi were all mainstays on the Sharks power play's second unit. None of those players will begin the 2013-14 campaign in teal which essentially signals open tryouts to fill the forward spots on that unit. While the Sharks have had the league's best power play throughout the McLellan era, they did have issues generating offense in that game state when Joe Thornton and Dan Boyle weren't on the ice last season. Losing Gomez, whose 5.62 points per 60 minutes of power play time ranked 2nd on the team last year behind Thornton, won't help improve that.

This is likely where Tomas Hertl comes in. He'll be given every opportunity to make the team and one of the many reasons why is that, with Thornton, Marleau, Couture and Pavelski all on the first power play unit, Hertl is the best possible center for the second unit. Until Havlat returns to the lineup, he'll probably be flanked by Torres, who saw some time there late in the season and into the playoffs, and Kennedy, who saw a reasonable amount of spot duty in this role during his Pittsburgh days. But the coaching staff hasn't been hesitant to use Wingels in this role before and it's even possible Brent Burns, whose two power play goals last season both came from closer in than the point, could play wing at even-strength and on the man-advantage.

5. Who starts the season on Joe Thornton and Brent Burns' left wing?

The only forwards who spent significant time last season as the left wing completing Thornton and Burns' line were Galiardi and Havlat. One will start this season in Calgary, the other on injured reserve, so there's an open spot to be filled. And let's be honest: it's a pretty cushy job. You get to play with one of the league's best playmakers and an absolute wrecking ball on the opposite wing who does most of the dirty work along the boards. You start the majority of your shifts in the offensive zone and generally draw weaker opposing forwards, with the Couture line taking on the toughs. At least on paper, it seems like a lineup spot tailor-made for breaking a young scoring forward into the NHL.

There hasn't been anything resembling official word from the coaching staff on this, but I'd be surprised if Tomas Hertl isn't playing with Thornton and Burns in the season opener. He's a natural center but he shoots left and could probably transition to that wing. He's a step down from Galiardi in terms of foot speed but a step up in almost every other department and using him in this role seems preferable to throwing the kid to the wolves on a line with Marleau and Couture. There are certainly other candidates for this spot, including Torres and Kennedy, but it would appear to be Hertl's job to lose.