SB Nation is unveiling its massive 2013-14 NHL regular season preview early next week. We contributed the section on the Sharks which included three big questions facing the team heading into the year. Here they are, asked and answered.

1. Can Brent Burns be the best power forward in the NHL? 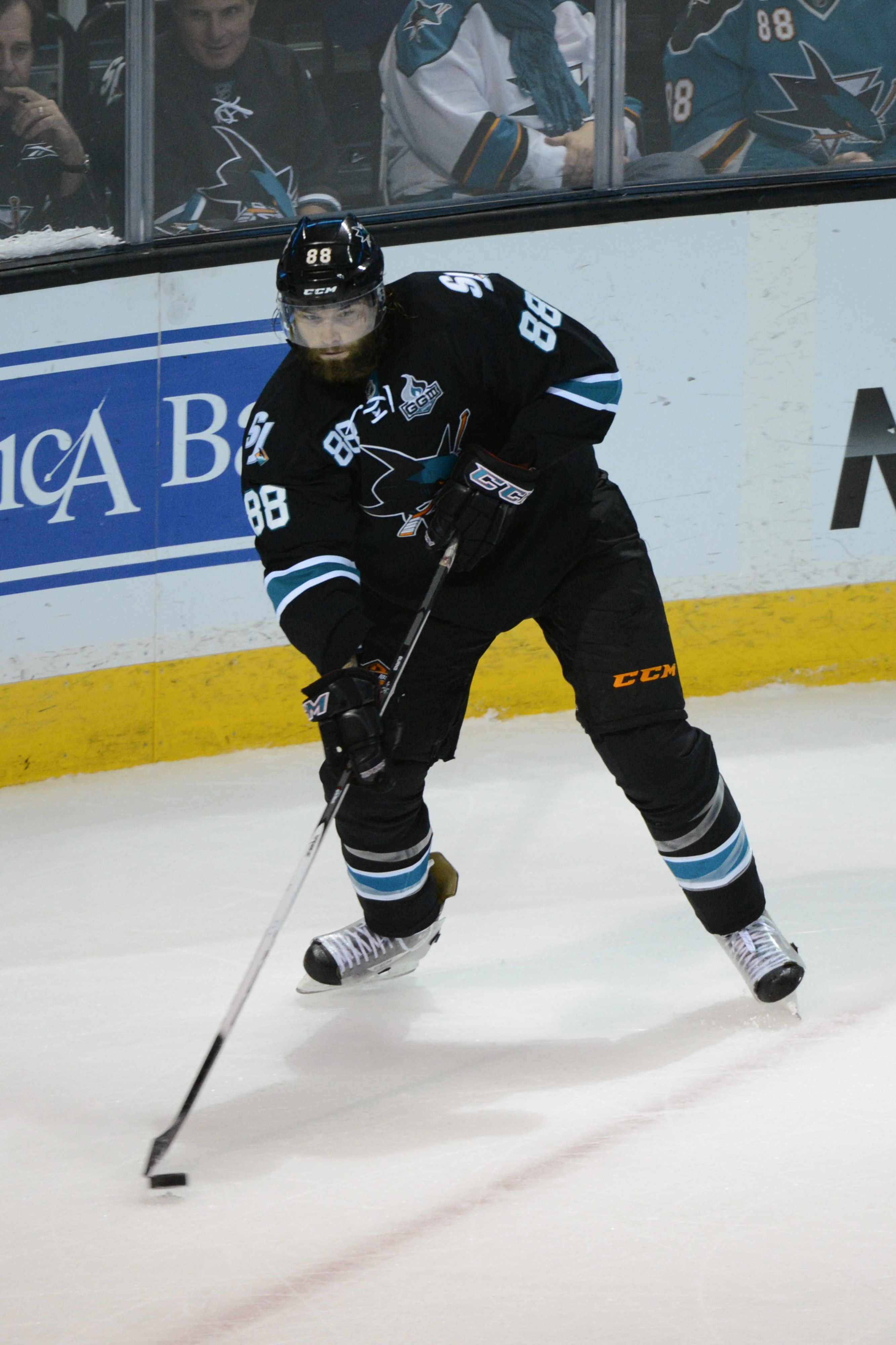 So this phrasing is pretty hyperbolic. Even if it were possible to objectively name the best power forward in the league, the Sharks don't necessarily need their 6'5", 230-pound power defenseman-turned-winger to be that. What they do need from Brent Burns is more of the same. In his 23 games up front last season, Burns was quite literally a game-changing presence; an unrestrained force on the forecheck who helped the Sharks territorially dominate shifts every time he stepped over the boards.

More than that, he proved to be a breath of fresh air into a dormant Sharks offense with nine goals and 20 points in his time on Thornton's wing. That production was made particularly impressive by the fact that seven of those goals and 17 of those points came at even-strength, all in the 301 even-strength minutes Burns skated as a forward. That's an average of 3.39 points per 60 5v5 minutes which puts Burns-as-a-winger in pretty remarkable company among forwards who played at least 300 even-strength minutes last season: 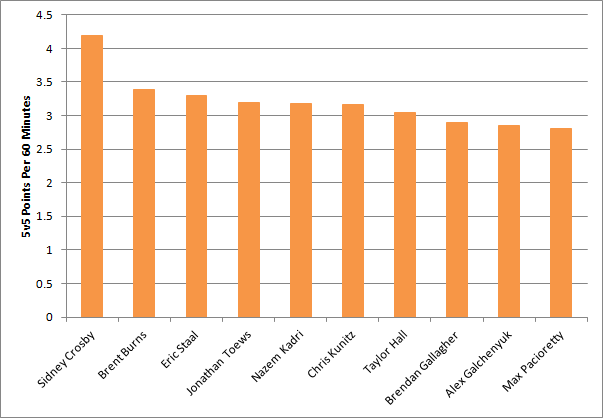 Only Sidney Crosby scored at a higher clip at evens than what Burns managed in his time as a forward. The only Western Conference forwards to even crack the top ten in this category besides Burns were young studs Jonathan Toews and Taylor Hall. Granted, none of this is to suggest that it's at all realistic to expect Burns to continue scoring at this rate. 300 minutes isn't nearly enough time to get a handle on a player's true talent level but if Burns can even average north of 2 points per 60 at even-strength as Joe Thornton's most effective right-shot trigger man since Jonathan Cheechoo, it would give the Sharks another genuine 5v5 threat outside Logan Couture. Best power forward in the league or not, that type of production would certainly help fill the void left by Martin Havlat and Raffi Torres' injuries and go a long way towards answering the second big question facing the team...

2. Will the Sharks finally figure out how to score at even-strength? 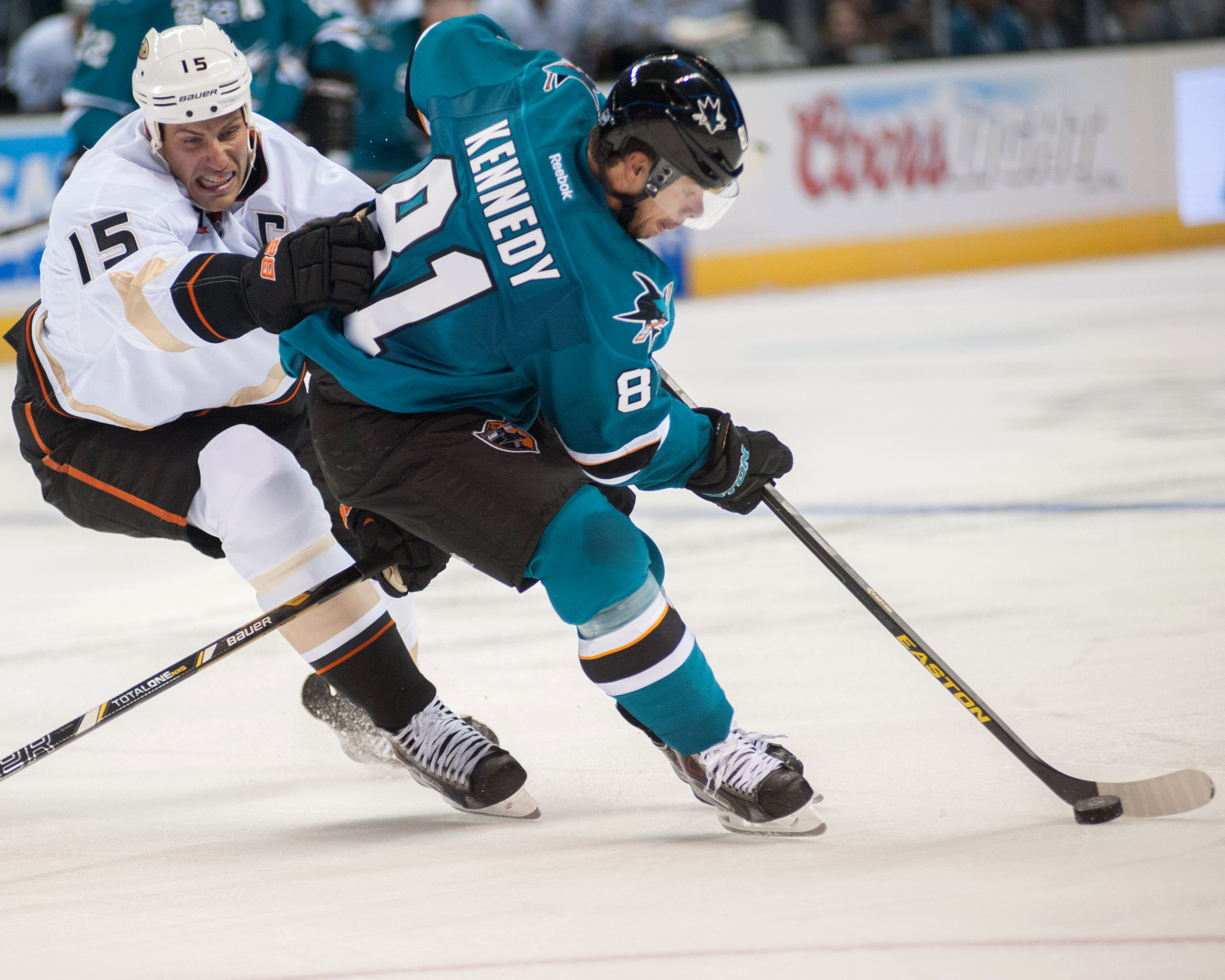 In my mind, this is far and away the biggest question facing the 2013-14 Sharks and will likely determine whether or not they can be considered a top-flight Cup contender. While the team has had fairly consistent struggles lighting the lamp at even-strength throughout nearly the entirety of the Thornton era, they've been particularly 5v5 goal-starved the past two seasons. Just thirteen teams scored fewer even-strength goals than the Sharks in 2011-12 while only five were worse in that category this year. That just isn't good enough for a team with championship aspirations, which became all too clear when the Sharks scored just 14 even-strength goals in 11 playoff games.

Some of their struggles, particularly this past season when they converted just 6.7% of their even-strength shots, can be traced to bad luck. But more often than not in the recent past, the Sharks' even-strength scoring woes have been a direct result of their overall lack of forward depth. Where teams like Detroit, Chicago and Boston have been able to rely on regular contributions from their bottom six, San Jose simply hasn't had that luxury. So while they're looking for bounce-back even-strength seasons from Joe Thornton and Patrick Marleau, the real question is whether offseason acquisition Tyler Kennedy or rookie Tomas Hertl can provide an infusion of five-aside offense from someone besides the usual suspects.

While he's coming off a forgettable season, Kennedy could legitimately be that guy. Since 2008, only 63 qualifying forwards have scored more even-strength goals per minute than the erstwhile Penguins winger. Hertl scored 18 goals and 30 points in 43 games for the Czech Republic's highest-level men's league last season; especially if he sticks on a line with Thornton and Burns, it probably isn't unrealistic to expect some offensive punch from the 19-year-old at even-strength. While injuries to Havlat and Torres muddle things a bit, the Sharks should be able to bide their time effectively until those two return. When they do, San Jose could finally be a team that doesn't solely have to rely on its power play to score goals.

3. Is this the end for Thornton, Marleau and Boyle in teal? 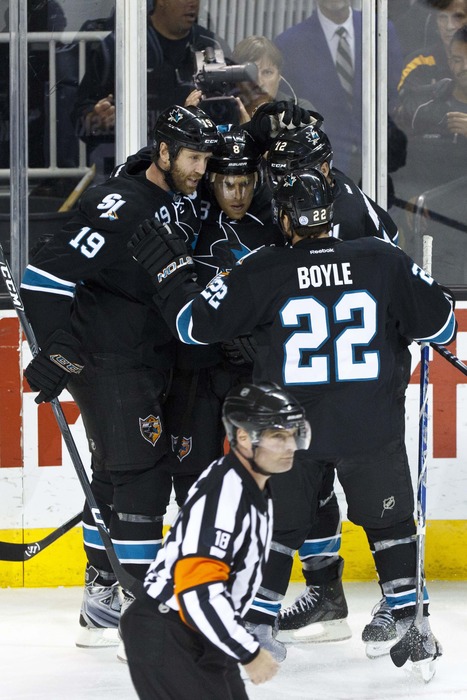 When the Sharks inked Logan Couture and Joe Pavelski to twin five-year, $30 million contract extensions this summer, they made a statement that they were committing to their younger core. What remains to be seen, with Joe Thornton, Patrick Marleau and Dan Boyle all entering the final year of their respective contracts, is whether the organization will commit to the older elements of its core. While there have been reports about discussions between Doug Wilson and all three players' camps, with Boyle reiterating earlier this week that he would like to end his career in San Jose, there's also the feeling that if things go awry this season, the franchise could bid farewell to the best defenseman and two best forwards in its history.

It seems unfathomable, especially given that all three players remain extremely important parts of the team. But the fact that they remain without extensions of their own at least makes it a possibility and seems to almost raise the stakes for this season. If this is the final year in teal for any or all of the Sharks' three most iconic players, a season culminating in the franchise's first Stanley Cup would be the most fitting sendoff.