The San Jose Sharks welcome the Boston Bruins to San Jose for their second of two meetings this year.

The last time these two teams met, the Bruins scored a game winner in the dying seconds of regulation to hand the Sharks their first non-shootout loss. San Jose badly outplayed Boston throughout the night, but Tuuka Rask stood on his head, denying the Sharks from making a statement win against last year's Eastern Conference champions. 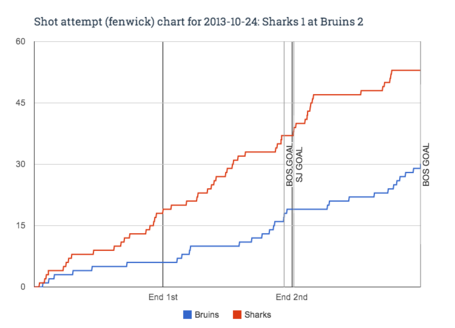 Thanks to Extra Skater for the graph. If the Sharks play like they did in their first game against the Bruins, they'll be in good shape. Of course San Jose's growing infirmary status won't help them reach that end, but remember that in the last meeting Brent Burns was absent thanks to some sort of a dental injury. You know, whatever that mouth injury thing is that wookies get. I have no idea.

The Bruins lost the first two legs of their California road trip, losing 4-2 to the Kings on Thursday night and the Ducks 5-2 on Tuesday and finish their road trip in San Jose tonight. Likewise, this is the last game of San Jose's homestand as they will head to D.C. to play the Capitals on Tuesday.

There will be no redux of the Hamilton Classic tonight as Freddie Hamilton is back down in Worcester. Any hope of seeing a rematch evaporated when Matt Tennyson had his number called as the Sharks' most recent injury-forced call up.

San Jose looked a lot more comfortable in their second game without Logan Couture than they did in their first, albeit against a Detroit team that's nowhere near as good as the Bruins squad they'll face tonight. Getting Tommy Wingels and Tyler Kennedy back was a boost on Thursday and that should pay more substantial dividends tonight now that both players have had a chance to get their legs under them.

Beating the Bruins in a possession game is very doable for the Sharks, even given the injury troubles. Beating Rask? Well, that might take a bit of luck. Antti Niemi standing on the other side of the ice wouldn't hurt matters any .