Sharks vs Capitals: Do you want to build a snowman?

In which two hockey teams are compared to the newest Disney princesses.

Share All sharing options for: Sharks vs Capitals: Do you want to build a snowman?

In the modern, salary cap era of the NHL, there are few constant narratives. The admirable consistency of the Detroit Red Wings, the hilarious ineptitude of the Toronto Maple Leafs, the Phoenix Coyotes' bitter rivalry with finances... And, of course, the sister franchises of the San Jose Sharks and Washington Capitals: the dominant regular season teams that tend to not do as well in the playoffs.

Really, if you think about it, the Sharks and Capitals are Elsa and Anna from the award-winning film Frozen.

The Sharks are Elsa. Not only are they isolated from other teams (relative to the Capitals, of course), but their postseason expectations are higher and they've dealt with consecutive playoff failure longer. Plus, "Let It Go" is basically Joe Thornton's four goal celebration in song form.

Meanwhile, the Capitals take the role of the ultra-enthusiastic Anna. Besides the younger, more outgoing, and attention-grabbing aspects, there's also this:

Anna in "For the First Time in Forever": "Don't know if I'm elated or gassy / But I'm somewhere in that zone"

The captain of the Washington Capitals:

I rest my case.

I can go on with the comparisons. Adam Oates, he of the infamous "Hertl is disrespecting the league" quote, is obviously the Duke of Weselton, who actively tries to destroy Elsa because she has awesome snow powers.

On the other hand, Tomas Hertl is Olaf the snowman, due to his adorable innocence and perpetual smile. 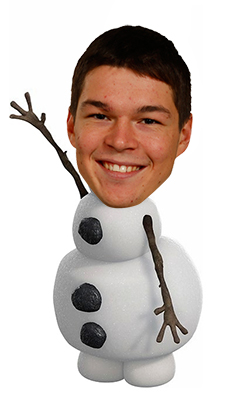 Dustin Brown's knee plays the part of the sun.

Finally, Prince Hans is the President's Trophy, which I will abstain from explaining why due to SPOILERS.

For whatever reason (perhaps magic snow powers?), the Sharks have dominated the Capitals for almost the entirety of their existence. The Sharks have compiled a 21-9-1 record against the Capitals, with their last loss coming in 2009 (and before that, 1999).

This season, the Capitals have struggled with 5-on-5 scoring; 31.3% of their goals came with the man advantage (for comparison, the Sharks only have 22% of their goals coming from the man-advantage despite their league-leading penalty differential). There's also been discord among the players, with both Martin Erat and Michal Neuvirth requesting trades.

On the other hand, there's also the supremely talented Alex Ovechkin, first team RW and second team LW for the 2012-13 season, who is always a threat to score. His defensive acumen, though improved from past seasons, still leaves something to be desired.