Game Theory: How do opponents' strengths affect your team's performance?

Can NHL teams maintain some aspects of their play regardless of their opponent's strengths?

Share All sharing options for: Game Theory: How do opponents' strengths affect your team's performance?

Over at my site Puck Prediction, I spend a lot of time using team statistics to predict the outcomes of NHL games. More than anything else, the game-to-game variation in these statistics makes this difficult: some nights, a hot-shooting team can't score to save their lives; other nights, a normally solid goalie embarrasses himself; and sometimes, a team that's strong in puck possession gets dominated on the shot clock.

Most of this work focuses on how two teams' underlying stats match up. Sometimes performance varies in predictable ways. For example, it wasn't surprising that the Sharks put 45 shots on goal against Colorado on December 23; San Jose tends to create more shots than average, and the Avalanche tend to surrender a lot of them. Similarly, you might have anticipated the Sharks putting just 26 shots on goal on January 9 against Detroit, insofar as the Wings don't usually give up a lot. On the other hand, some teams seem to be able to maintain their performance in certain areas with some consistency. Boston goaltenders seem to post high save percentages more regularly than goalies on other teams; the Sharks regularly produce tons of shots on goal, seemingly regardless of opponent; and the Kings seem able to limit their shots against no matter who they're playing. My question today is whether there are general patterns in this sort of thing: does your opponent's performance in certain areas prior to your game against them predict how well your team will play? For example, if you're playing an opponent with high goalie save percentages, what is this likely to mean for your team shooting percentage in that game? If you're playing a team like the Kings, are you likely to have fewer shots on goal than usual, and if you're playing a team like the Sharks, are you likely to give up more shots than usual?

The proprietor of the Extra Skater website was kind enough to put together a dataset for me that includes all advanced statistical data from the 720 games of the 2013 NHL season. This dataset includes each team's 5-on-5 goals and shots, and missed and blocked shot attempts at even strength and in close-game situations, as well as the total time spent in those situations, for each game. I used these to calculate each team's 5-on-5 Sh%, Sv%, goals for and against per 60 minutes, shots on goal for and against per 60 minutes, and Fenwick and Corsi attempts for and against per 60 minutes. I also calculated Fenwick and Corsi attempts for and against per 60 in close-game situations. In addition to the in-game values of these measures, I calculated their prior-game values and 5-game and 10-game moving averages of prior-game values. This allowed me to study a team's performance on these variables as a function of the "opposing" values their opponent generated coming into the game. For example, I looked at how a team's save percentage in game i varied by their opponent's shooting percentage in game i-1, and at how game i shots-for varied according to opponent game i-1 shots allowed. The three tables below describe these analyses. For each "opponent" statistic, I sorted the values and split them into quartiles, and evaluated mean in-game values for the index team within each quartile. Results are presented by the opponent's last-game, five-last-game moving-average, and 10-last-game moving-average values.

Some notes on these results:

In order to look at the impact of opponent performance, relative to the play of the index team, I analyzed the rates of goals, shots, Fenwick and Corsi using multiple linear regressions. Each of these analyses modeled the team variable in game i as a function of that variable at i-1 and the other team's "opposing" variable at i-1 (e.g., SF/60 at game i ~ f(SF/60 at game i-1, opponent SA/60 at game i-1). Basically, these models characterize the impact of past opponent performance on game-i team performance, holding the same team's past performance constant. The results of these analyses are below. In general, these analyses support the notion that shots and shot attempts against more consistently predict opponents' rates of shots-for than the other way around. 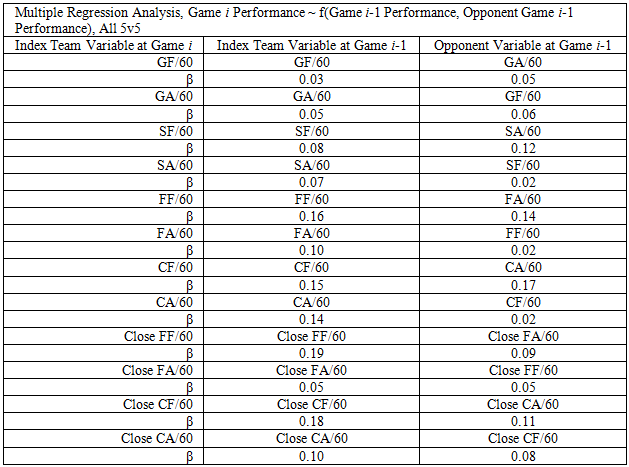 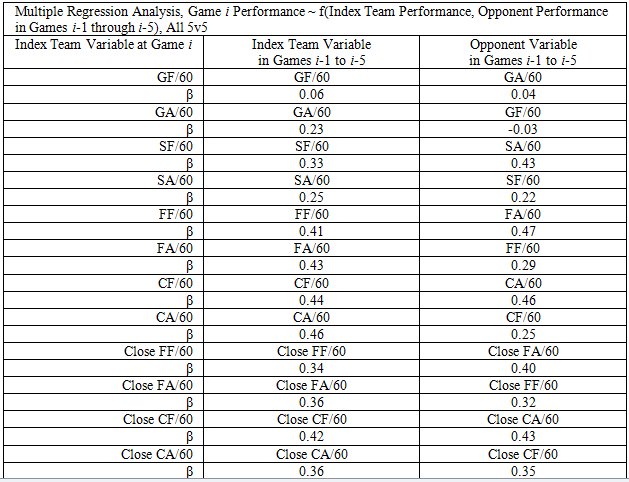 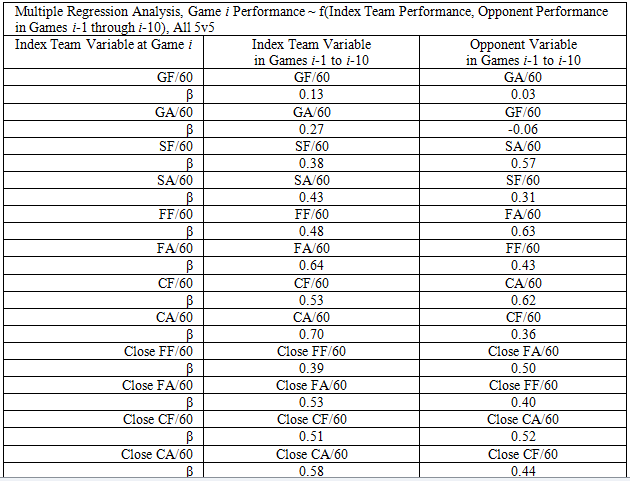 There are reasonable caveats to note regarding the above analyses. Though we had a healthy-sized sample of games to work with, it's possible that the obvious idiosyncrasies of the 2013 season (abbreviated schedule, no inter-conference play) might have influenced these results. And it's obvious that single-game measures and 5- and 10-game moving averages may be too noisy to accurately represent the quality of teams' underlying abilities. Moreover, some games have very few minutes of close-game 5-on-5 play, and event rates in those games are very unstable statistically. The same issue prevented me from resolving the score-effects question by looking at tied-score event rates.

Still, assuming the general relationships observed here are valid, these findings suggest that the rate at which NHL teams allow shots is one of the more consistent features of their game: the rate of shots against doesn't appear to vary dramatically by opponent shots-for, though score effects may be partly responsible for this. The implication, which we see reflected in these results, is that the rate of shots your team attempts is likely to be somewhat dependent on the defensive skill of their opponent. If you're trying to anticipate how two teams are going to match up in a given game, looking at their rates of shots-allowed is probably a good place to start.