It's been a roller coaster ride for SJSU Hockey this season. The team had 4 road trips in a row, broken up by a month-long semester break. In that time, they've hit disappointing lows against some top competition, but bounced back with a strong start to the second semester. Now, they head home to Sharks Ice for the first time in 75 days for a three-game set, with a playoff push in mind.

The #9 San Jose State Spartans return to Sharks Ice at San Jose tonight with a match-up against #7 Texas A&M, with the #2 and #12 ranked teams waiting right behind them. SJSU needs to continue their playoff push here in the second semester after ending the last one on such a sour note.

The Spartans finished the first semester with road trips to Utah and Arizona where they went a combined 1-6 due to injuries and inconsistent play. But since the semester break, SJSU has fared much better on trips to Las Vegas and Southern California - going 5-0-1 in the process.

"I think we need to keep playing the same way we have been," said winger Sam Cimino. "We [need to] minimize our mistakes even more than we did in LA - we still had a few that cost us."

San Jose State will not be able to afford to make many mistakes with three ranked opponents this weekend. Only the top ten teams in the Western region make it to the postseason, so the games against #7 Texas A&M and #12 Loyola-Marymount are huge for positioning. And an upset against #2 Utah State would almost guarantee them a spot in the postseason.

"Coming down to these last couple weeks, every game is crunch-time," said defenseman Salvatore Barranco. "You have to take it as a playoff." Barranco is optimistic about the outlook: "I think with our momentum after last weekend, this will be a good weekend for us."

While the team has had its ups and downs, top-line winger Sam Cimino has been consistently on the top of his game. The fifth-year skater and captain of the team is now the second-leading scorer in San Jose State history. Cimino is sitting with 273 points in his Spartan career and just passed Andy Dickerson for second place last weekend.

"It's a pretty nice accomplishment," said Cimino. But the captain quickly shifted the focus to the team. "It's a fun thing to have - you know, record are always fun to chase - but I'm really more concerned with how our team's playing right now."

Well, the team's rolling now. And a lot of that has to do with Cimino. On the season, he's put up a gaudy 33 goals and 23 assists - that's roughly 2.5 points per game. He's been a consistent threat with points in 20 of the 22 games he's played this season, including a huge 6-point effort last Thursday against Long Beach State. Cimino was going to need to score at a good pace to pass Dickerson this season, and he's easily eclipsed it with seven games left this season. 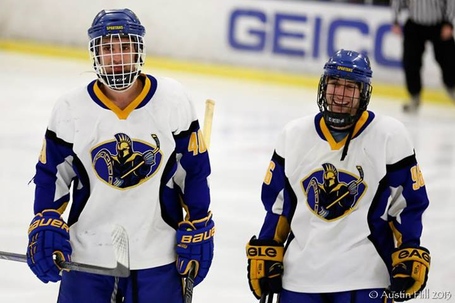 Sam Cimino and Salvatore Barranco are currently #2 in school history for points scored as a forward and defenseman, respectively. - Photo courtesy of Austin Hill.

Sam Cimino isn't the only Spartan making a dent in the record book this season. Defenseman Salvatore Barranco is on the edge of becoming the leading scorer for defenseman in school history. After a 6-point weekend in SoCal, Barranco is sitting just 2 points shy of Joel Jenkins, who played for SJSU in the mid-90's.

"I know the history of the team," said Barranco. "And for me to be able to approach a record like that, it means a lot."

Barranco has been a great puck-moving defenseman in his time at SJSU, and is over a point-per-game pace for his career. "I've been fortunate enough to be able to play with good players," said Barranco. "I have to give credit to the people I've played with."

Unfortunately for the Spartans, they could use a couple more players to play with him on defense. With injuries to blueliners Christian Rendino and Eric Jones, the Spartans have been stuck rolling only four defensemen since the start of the semester. But it hasn't phased Barranco. "It can be rough at times, but we've been working hard off the ice," said Barranco. "I think once you develop a rhythm, you kind of understand how to catch your breath with 4 D, and pace yourself."

Surprisingly, despite only having four defenseman at the moment, the play from the blueline has been stellar. This last weekend might have seen some of the most consistent play from the defense we've seen all season. "We're coming together as a defensive core at the right time," said Barranco. "It's not how you start, it's how you finish."

SJSU Hockey is finally home! The Spartans take on #7 Texas A&M tonight at 7:30 pm, the #2 Utah State Aggies tomorrow at 7:00 pm, and #12 Loyola-Marymount on Sunday at 3:15 pm. Friday and Saturday's games will be held on the north rink at Sharks Ice at San Jose, while Sunday will be on the east rink. Tickets will be available at the door. And as always, all three games will broadcast by yours truly on Black Dog Enterprises.