Sharks vs. Wild: Going for six in a row

San Jose attempts to win its sixth consecutive game when it hosts the Minnesota Wild tonight.

Share All sharing options for: Sharks vs. Wild: Going for six in a row

The Sharks have had two six-game winning streaks so far this season and look to seal their third with a victory tonight over Minnesota at the Tank. For their part, the Wild have won seven of their last ten and are coming off a 2-1 win over the Blackhawks that saw Zach Parise skate in NHL action for the first time in a month. Former Sharks prospect Charlie Coyle, who has two goals and seven points in eleven games so far in the new calendar year, will center him tonight on the team's top line. While Minnesota appears to have a stranglehold on the final Wild Card spot, this chart has to be somewhat concerning to head coach Mike Yeo: 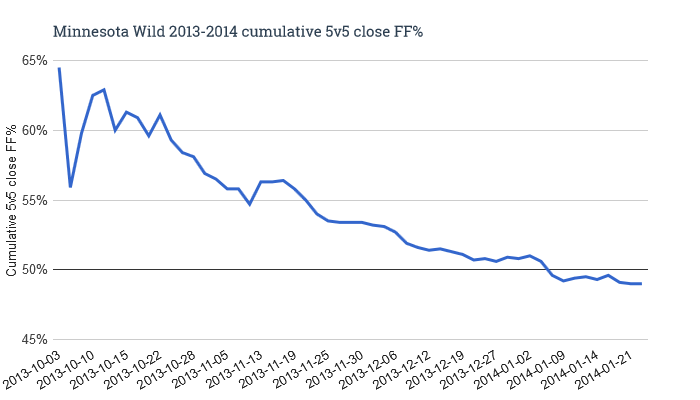 After an impressive start to the season in puck possession, fueled by an increased organizational emphasis on winning the neutral zone, the Wild have been in something of a tailspin for a few months now and have now been outshot at even-strength in score-close situations on the season. Losing first-line center Mikko Koivu to an injury in early January certainly hasn't helped and neither has an injury to criminally underrated top-four defenseman Jared Spurgeon. Neither will be playing tonight, which gives the Sharks an opportunity to take advantage of an opponent that has worked their way into the win column more often lately but appear to not be playing particularly sound hockey.