Sharks look to get back on track against the Oilers

After seeing their six-game win streak snapped by the Los Angeles Kings, the Sharks are going to try to start a new win-streak in Edmonton.

Share All sharing options for: Sharks look to get back on track against the Oilers

There are no bones about it: The Edmonton Oilers suck again. It's another year where they have a better chance at earning the number one pick in the draft than they do of making the playoffs. Edmonton is just four points clear of the Buffalo Sabres for last place in the NHL and their underlying numbers don't suggest they've been dealt a tough hand this year. 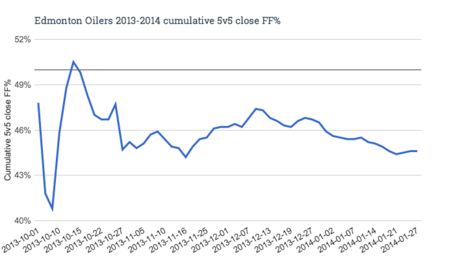 Things aren't exactly getting any better for the Oilers, and the Sharks have the opportunity to scoop up six points against them over the remainder of the season. After a tough 1-0 loss to the Kings on Monday night, it'd be nice to see the Sharks offense find some rhythm again, particularly with Chicago coming up on Saturday.

In their previous two meetings, the Sharks have outscored the Oilers 8-2 including a 5-1 victory on January 2. They outshot Edmonton 73-55 in the two games combined. The Sharks are a much, much better hockey team than the Oilers (#analysis you can use), and it's just a matter of them putting out the effort tonight to get out with two points.

While the goaltending certainly wasn't the problem against the Kings, I'd expect Antti Niemi to get the start in Edmonton tonight with Alex Stalock getting the nod in Calgary tomorrow. Given the poor offensive effort on Monday, it wouldn't surprise me too much to see Todd McLellan mix up his lines again tonight.

Speaking of line-mixing, can we talk about Mike Brown getting the start on Monday night over James Sheppard? Ever since Brown was traded to the Sharks, we new his role on this team was going to be of the Face Punching variety. He's a (slightly) better player than Matt Pelech but my pretty much any metric he's worse at hockey than Sheppard. Sheppard is a +1 percent relative corsi player this year, while Brown is a -7.5 percent player by the same metric. That's an 8.5 percent swing just to get a guy in the lineup that can throw a right hook.

McLellan (presumably) feels that Brown brings energy to the Sharks that Sheppard does not; maybe Sheppard can pound a 5-hour-energy before the game starts and we'll call it square?