Despite attempting 100 shots, the Sharks were shut out for the second straight game.

Share All sharing options for: Scrivens schools Sharks with record-breaking 59-save shutout

"If you throw pucks to the net, good things will happen" is one of the oldest axioms in hockey. Well, on Wednesday night the San Jose Sharks did nothing but throw pucks to the net—100 in total, 59 of which found their way to Oilers goaltender Ben Scrivens—for the entire duration of their game in Edmonton, but no good things happened. At least not for the Sharks, who were shut out for a second game in a row courtesy a record-setting performance by the Oilers' newly-acquired netminder. It isn't remotely hyperbolic to suggest Scrivens single-handedly stole this game for the Oilers. Here, for example, are his teammates attempting to kill a penalty late in the game courtesy Z.A. Kline: 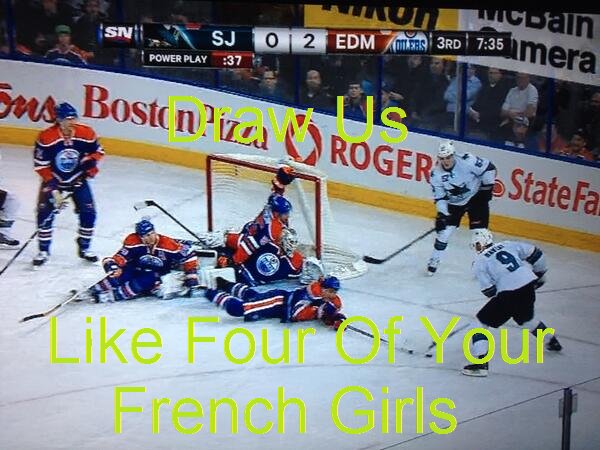 That's just a sampling of the Oilers' defensive structure in this game. They were hapless, and it led to the puck spending the vast majority of the contest in the Edmonton zone. Inexplicably, it didn't lead to an Oilers loss. A point shot from Justin Schultz in the first period, a Taylor Hall conversion of a 2-on-1 in the third and a Jordan Eberle garbage-time goal on a late power play allowed the Oil to somehow skate away victorious from a game in which they were pelted by every measure other than the scoreboard. This shot attempt chart paints the accurate picture that this game was never close in terms of which team was controlling the play: 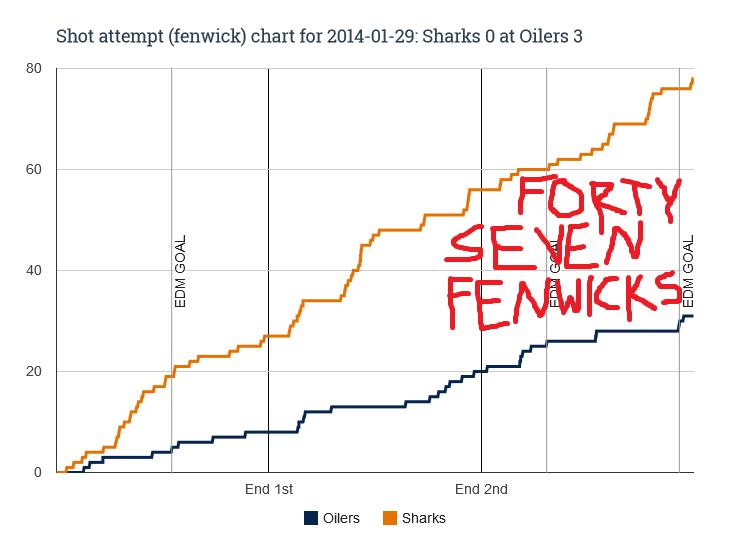 There isn't much else to say about this game. Sure, the Sharks could have been better on their three power plays, although the aforementioned flurry in front of Scrivens on a third period man-advantage resulted in several grade-A chances. They were admittedly a bit lax when defending the dangerous Ryan Nugent-Hopkins line in the neutral zone, which led to some scary moments in the San Jose end including Hall's goal. But, seriously, 100 shot attempts should be enough to win you the game. The fact that it wasn't is a testament to an unreal performance by Scrivens and/or an epic smiting by the hockey gods.