In the first half of their Central Division back-to-back, the Sharks take on the Avalanche in Colorado this afternoon.

Share All sharing options for: Sharks vs. Avalanche: Afternoon delight

Tyler Kennedy is out with the flu and Mike Brown did not practice yesterday after absorbing two Matt Irwin point blasts to the leg and face late in the Sharks' 5-1 win over Edmonton as San Jose's forward depth continues to be whittled away into nothingness by a seemingly endless slew of injuries. Eriah Hayes was recalled from Worcester and could suit up today in Brown's place while Kennedy didn't make the trip. Injured forward Tommy Wingels made the trip but will not play.

Regardless, there are two important points on the line this afternoon as the Sharks travel to Denver to take on the Colorado Avalanche, winners of two straight albeit a team that's in a bit of a free-fall (an avalanche, if you will) when it comes to their underlying numbers (via extraskater.com): 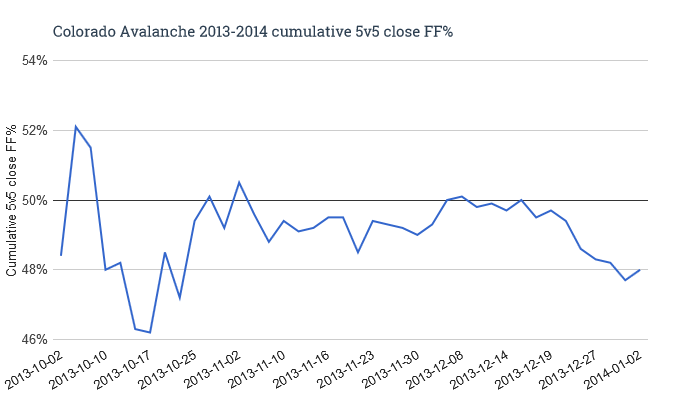 After hovering around the break-even mark in score-close possession for much of the season, the Avs have really taken a turn for the worse in that regard as of late and at the worst possible time as their division rival Dallas has climbed into a playoff spot and shows no signs of slowing down. San Jose needs to take advantage of an ostensibly struggling (but still loaded with offensive weapons) club as the chances of beating the Blackhawks in Chicago on the second half of a back-to-back tomorrow with five top-nine forwards out of the lineup are...well, they're not good.

An injury to P.A. Parenteau has forced head coach Patrick Roy to juggle his lines a bit. Presumably Paul Stastny will draw the primary checking assignment, matched up against Joe Thornton, which leaves Patrick Marleau and Logan Couture to take on Matt Duchene. If they can shut Colorado's top offensive center down the way they did when these teams met in San Jose two weeks ago (and it should be an easier task this time around as he isn't flanked by O'Reilly and MacKinnon), the Sharks should have a good shot at getting their standings points while they can prior to Sunday's brutal matchup.