In a weird twist of fate, a goal that should not have counted contributed heavily to the Sharks 3-2 defeat at the hands of the Nashville Predators.

In a season of disallowed Sharks goals, it just makes sense that a goal that should have been disallowed would come back to bite San Jose.

Colin Wilson dove on to the right leg of Antti Niemi, preventing the newly-christened Olympian from shifting to the right side of the net. Roman Josi took advantage and scored what would be the game-winning goal at 11:21 in the second period. The Predators third goal of the game would prove to be a deficit too great for an injury-depleted Sharks squad missing seven forwards.

A three-goal second period was enough for a Nashville team that is 2-0 against the Sharks this season. David Legwand opened the scoring early in the second frame and 27 seconds after Joe Pavelski tied the game at one, Niemi gave up a softie to Mattias Ekholm to give the Predators a lead that would stick for the rest of the game.

After outshooting the Chicago Blackhawks on Sunday, this game was a serious letdown for the Sharks. The Predators bossed them around for the entirety of the first period and were able to hold on to their lead of the Fenwick for the rest of the contest. Observe the chart. 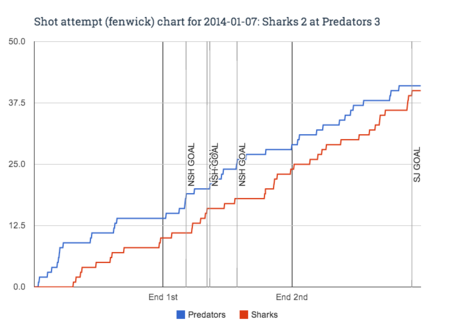 Even with the healing power of score effects on the Sharks' side for the latter half of the game, they were unable to make up any ground until the death throws of the third period. Patrick Marleau made the final 1:22 interesting, but the Sharks weren't able to equalize. They have now lost three of their last five and went 1-2 on their brief road trip. They'll return to SAP Center to battle the Detroit Red Wings on Thursday.