The Sharks take on the Detroit Red Wings for the final time this year.

Share All sharing options for: Sharks vs. Red Wings Preview

Just how deep are the San Jose Sharks? The search for depth has been going on for what feels like forever in an attempt to bolster the forward ranks not named Joe Thornton, Patrick Marleau and Joe Pavelski. It felt like the year that the Sharks were (finally) deep enough to withstand losing Raffi Torres to a playoff series suspension. And maybe they still are.

But I don't know of an NHL team deep enough at the forward position to survive losing six forwards at the same time. Couture is an all-star, Hertl was a shoe-in for the Calder and Tommy Wingels was having a damn good season. Torres was very effective in his time with the Sharks last season and Martin Havlat...well, someone has to fill up the water bottles.

The Sharks, unsurprisingly, did not look all that comfortable with their new lines on Tuesday where they were bossed around by the Predators for most of the game. I expect the Sharks' effort to be better tonight, but unfortunately it comes against a much better team than the one they faced in Nashville.

Detroit just crapped on the Dallas Stars, but it kind of seems like that's the trendy thing to do these days. Despite having streaky points to their season, their Fenwick has been the model of consistency so far. 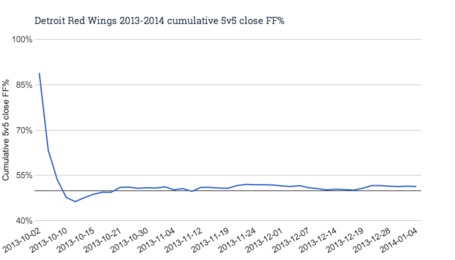 Compare that to a team who has had some fluctuations, like the Colorado Avalanche. 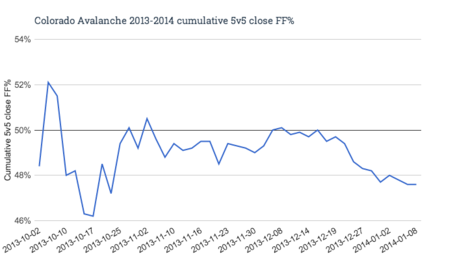 Both of these graphs are courtesy of Extra Skater.

In their previous meeting in Detroit, these two teams combined to play one of the worst hockey games I have ever seen. I talked about how much I would miss the Sharks playing the Red Wings more than twice a year (or in the playoffs), but if they're going to play games like that they are more than welcome to hang out in the eastern conference.