While the men's hockey tournament at the 2014 Winter Olympics in Sochi won't begin until Wednesday, with USA set to open against Slovakia the following day, the U.S. men's team recently held its first practice which provided an early glimpse at the line combinations and defense pairings head coach Dan Bylsma plans to at least start the tournament with.

One of those lines featured Sharks center Joe Pavelski between Toronto Maple Leafs wingers James van Riemsdyk and Phil Kessel. The others included St. Louis Blues teammates David Backes and T.J. Oshie on a unit with Zach Parise, Ryan Kesler between Dustin Brown and Patrick Kane and Paul Stastny centering Max Pacioretty and Ryan Callahan, with Blake Wheeler and Derek Stepan the odd men out up front. On defense, Ryan Suter and Cam Fowler were paired, as were Ryan McDonagh and John Carlson, Paul Martin and Kevin Shattenkirk, and Brooks Orpik and Justin Faulk. 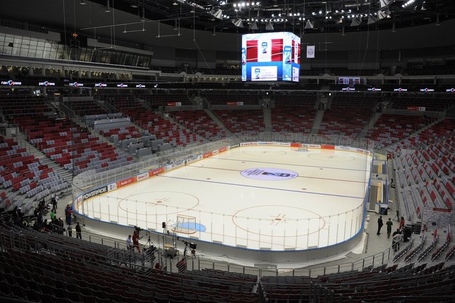 Bylsma seems to be trying to spread the wealth here, at least to start, as the team's top three offensive weapons in Kane, Kessel and Parise are each on a separate line. As a result, it's difficult to really rank-order these lines from one to four without first observing their in-game minute distribution and situational usage. Kessel and van Riemsdyk have plenty of experience playing together as an effective offense duo for the Maple Leafs, albeit with a vastly inferior center to Pavelski between them in Tyler Bozak. Given Pavelski's faceoff prowess, overall possession skills and underrated ability as a distributor, those three could be lethal for the Americans. For whatever it's worth, as far as chemistry is concerned, Pavelski and Kessel are also both Wisconsin natives and played on the same line for the majority of the 2010 Olympics as well.

Speaking of the Vancouver games, ESPN.com ran an excellent in-depth retrospective on the gold medal game between the U.S. and Canada, chock full of player and executive quotes. The ones that struck me as most interesting came from former Sharks head coach (and 2010 USA bench boss) Ron Wilson who had some high praise for Pavelski. Here's RW on wanting to get Pavelski on the ice with the U.S. down 2-1 and Ryan Miller pulled for an extra attacker:

We had used our timeout, I don't know what it was, with a little bit more than a minute to go in the game. I had it in my mind I had to get Joe Pavelski on the ice at some point because Joe is one of those junkyard dogs, he makes things happen. He doesn't look pretty doing it. It's really hard to sell other people around you that he's a really good hockey player when they don't see him every night. The first timeout, when we pulled the goalie, Millsy's on the bench, I didn't put Pav on the ice.

There were about 35 seconds left and [Babcock] wanted to have Pronger and Niedermayer on the ice the whole last two minutes. So Mike called the timeout and it gave me the opportunity to pull one of the guys off and put Pav on. We drew up a play, and then who does the puck end up going to below the goal line but Joe Pavelski? And Joe makes the play out to Patrick Kane ...

As you might recall, that paid off big time as it was a Pavelski pass to Kane in the right faceoff circle that initiated the tying sequence:

There was also Pavelski's glorious chance off a Scott Niedermayer turnover early in overtime. Both player and coach provided their recollection of the event. First up, here's Pavelski:

I think about it a little bit once in a while, that's for sure. You always hope you get a chance in overtime and that you're ready for it. I was ready, I got the chance, but it didn't go in. I remember going back to the bench and Timmy Thomas just being like, 'That was close.'

Pavelski intercepted a Niedermayer pass and fired one that Luongo had no idea where the puck was, and the puck stuck right here, between his mask and his shoulder. He caught it like that. Only Pav does stuff like this: He anticipated where Niedermayer was passing the puck and suckered him and stuck his stick there and took a quick shot. We thought it was going in, then you're like, 'How did he stop that because [Luongo] hasn't been sharp all night?'

The whole thing is well worth a read if you have time to spare. As for the country that prevailed in that overtime period, Canada, they held their first practice of the tournament today as well. It featured Patrick Marleau on an all-California line with Ryan Getzlaf and Corey Perry that could be an all-California five-man unit should they ever share the ice with Marc-Edouard Vlasic and Drew Doughty, who figure to be Canada's second pairing to start.

We'll have plenty of Olympic coverage throughout the tournament here on Fear The Fin, starting with an in-depth preview tomorrow, along with general Sharks stuff interspersed during this two-week NHL break.