For the second time in three days, a Sharks forward set up all three goals of a teammate's Olympic natural hat trick.

Joe Thornton, one of the best passers in the world, is not at the 2014 Winter Olympics in Sochi but his San Jose Sharks teammates who are have picked up the playmaking slack in his absence. Two days after Patrick Marleau notched the primary assist on all three goals of Jeff Carter's natural hat trick for Canada against Austria, Joe Pavelski set up each of Phil Kessel's trio of consecutive tallies against Slovenia this morning, powering Team USA to a 5-1 win and clinching first place in Group A, second place in the overall standings and a bye to the quarterfinals. In those quarterfinals, slated for Wednesday, the U.S. will face the winner of the Czech Republic vs. Slovakia qualifying match on Tuesday.

Elsewhere, Marleau and Marc-Edouard Vlasic were part of a 2-1 Canadian victory over Antti Niemi, who backed up starter Tuukka Rask for Finland. Skating on a line with Carter and Jonathan Toews that formed instant chemistry when placed together during Canada's 6-0 rout of Austria, Marleau logged 15:47, 5th among Canadian forwards in ice time, but was held to just one shot on goal courtesy Finland's suffocating in-zone defense.

Vlasic's 16:25 was the fewest minutes of any Canadian defenseman save their seventh, Dan Hamhuis, who played just 3:58. But the Sharks blueliner's most memorable moment came with about twenty seconds remaining in regulation and the score tied at one as Vlasic had the chance to walk into the left faceoff circle with the puck and potentially end the game, only to have his shot deflect wide. Both Marleau and Vlasic were part of the five-man unit Mike Babcock tapped to draw the toughest assignment, with most of their even-strength shifts coming against Finland's top trio of Mikael Granlund, Teemu Selanne and Jarkko Immonen.

With the round robin portion of the tournament over, here's how the playoff bracket shakes out via Wikipedia: 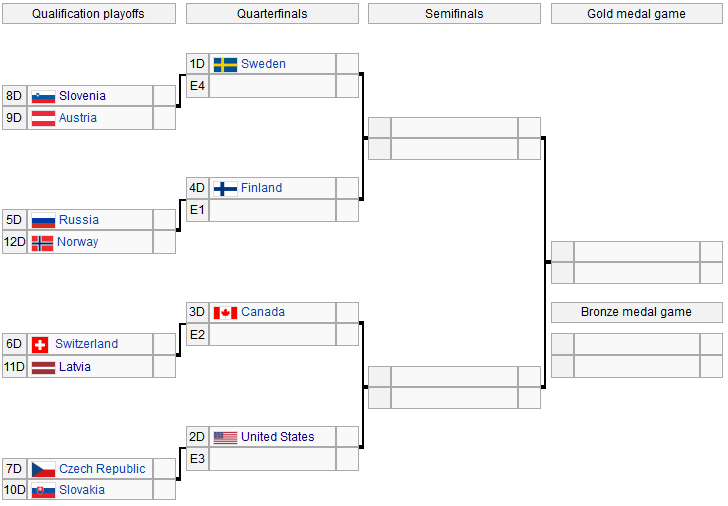 One result of Canada defeating Finland in overtime rather than regulation is that the U.S. and Canada can no longer meet in the gold medal game; a rematch of the deciding contest from 2010 will have to come in the semis.