Sharks back in action against Flyers

For the first time in a month we have Sharks hockey, which means all the bitter disappointment of being an American hockey fan without the nationalism!

Share All sharing options for: Sharks back in action against Flyers

It's hard to remember what was happening before the Sharks took a three week break for the Sochi Winter Olympics; which, all things considered might be a good thing. San Jose finished their first 59 games of the season with a 3-2 win over the Columbus Blue Jackets...which means absolutely nothing heading into tonight's tilt with the not-completely-awful Flyers.

I know I say the Flyers aren't completely awful, mostly because they're in a playoff spot; but good lord their possession numbers are bad. After an abysmal start to the season, Philadelphia has climbed back into the playoff race. They also embarrassed the Sharks when these teams last met. San Jose allowed four goals in the third period, gifting the Flyers a 5-2 victory. 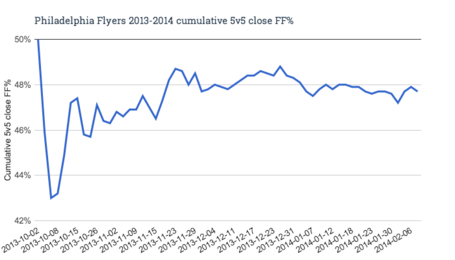 Logan Couture, who has been out since early January with a hand injury, and Raffi Torres, who has yet to play this season after sustaining an injury in pre-season play, will both return to game action. In a season that has been plagued by losing players to injury, it will be a welcome sight to see the Sharks GAIN a couple players rather than lose them.

If they sneak into the playoffs I think they can manage to do some real damage, especially since their top line easily belongs on a short list of the NHL's most fearsome. This is a big test for the Sharks, especially coming off their 5-2 loss to the Flyers that may have been their worst performance of the season. They can't afford anything resembling that outing against this team.e to a gimme as it gets. Then again...