The Sharks will try to avenge the Tommy Wingoal that wasn't as they face Buffalo for the final time of the season.

Share All sharing options for: Sharks vs. Sabres preview

Logan Couture's disallowed goal last night may have been just a footnote on a great win, but the last time the Sharks played the Sabres, a disallowed goal was the whole story. The NHL is truly awful at using a decent replay system, which should really excite baseball fans who will be getting an expanded taste of instant replay this season.

The Sharks should have gotten two points against Buffalo earlier this season, but they also should have played well enough to not go into overtime against the Buffalo freaking Sabres. After a slow start to last night's game, the Sharks did what they were supposed to do: beat the Flyers into submission. Ryan Miller (presumably) in goal for the Sabres should be the biggest hurdle for the Sharks to jump.

In case there is any doubt of how putrid the Sabres are this year, take a look at this chart. 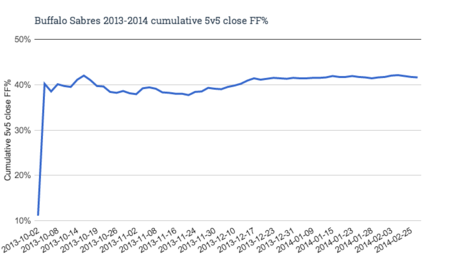 Note that their possession numbers are the worst in the league this year -- worse than the Edmonton Oilers and the Toronto Maple Leafs.There appears to be a strong correlation between proximity to the Canadian border and level of being bad at hockey in 2014.

Antti Niemi will get the start in goal for the Sharks tonight. It would be nice to see him come back strong after a few weeks off, if for no other reason than to further slow the roll of the Alex Stalock For President bandwagon. Also because Niemi playing well helps the Sharks win hockey games. Crazy, that.

Joe Pavelski went his entire career without a single hat trick and now has two this season. His 32 goals are the most he has ever scored in a season -- and there are still 22 games to be played. He has the most goals scored since the beginning of the new year (arbitrary endpoints!) and is, more importantly, a true American hero. He nearly scored four goals last night, which would have been especially awesome, because we all know what Pavelski does when he scores four goals...oh, you don't? Allow me to enlighten.

If Pavelski score four goals, he rips open his chest and allows a bald eagle to fly out. The tears of the eagle heal his chest, obviously.