By the numbers: Game 60 vs. Philadelphia

Share All sharing options for: By the numbers: Game 60 vs. Philadelphia

Fresh off the Olympic break, we're trying something a little new with these morning-after statistical game recaps. Inspired by Corey Sznajder's posts at the excellent Carolina Hurricanes site Shutdown Line, we're adding zone entry and zone exit data to the scoring chance numbers these posts have traditionally featured. Don't know what zone entries and zone exits are? We've got you covered, with full explanations of what these stats are, how they're tracked and why they matter later on in this post.

We might as well start with a reminder of what scoring chances are as well. What constitutes a scoring chance is a bit subjective and tends to differ depending on who's counting them. Essentially, I record a play as a "scoring chance" when it involves an unblocked shot attempt from the bounded area of the ice seen in this diagram. However, if there's a substantial screen or a considerable amount of puck movement that causes the goaltender to move laterally preceding the attempt, I'm usually more lenient with the location. Scoring chances essentially operate as a check on shot differential metrics to verify whether the team generating more shots in a given game, or over a series of games, is getting those shots from dangerous locations. While shot quality tends to be a minor factor in team success in the long run, it can mean a great deal at the single-game level. 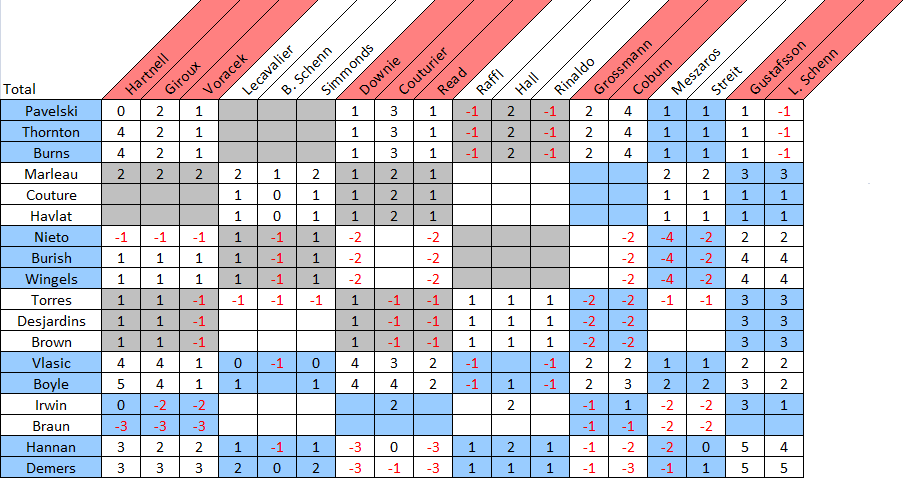 By goals and chances alike, the Sharks blew the doors open on Philadelphia during the second period last night. They outscored the Flyers 5-0 in that period and were full value for it, outchancing Philly 14-2 in the middle frame including a 11-1 edge at even-strength. Despite Logan Couture's return to the lineup, Todd McLellan opted to maintain a stacked top six rather than go three-deep down the middle. At least for one night, that certainly worked out as the Thornton and Couture lines alike were dominant. Flyers defenseman Erik Gustafsson had a nightmare outing, primarily going up against the reunited Marleau/Couture/Havlat line (who were terrific at even-strength, as they usually are), and ended the night minus-9 in even-strength chances.

We're lucky enough to have Jake Barrow tracking Sharks zone entries for us this season. Here's an in-depth explanation of what they are why they matter written by Eric Tulsky, who was the first to track and analyze entries and presented a paper on them at the 2013 MIT Sports Analytics Conference:

Separating a hockey player’s offensive and defensive contributions is quite difficult. Offensive skill can lead to increased puck possession and therefore improve statistics aimed at measuring defensive performance such as goals or shots allowed. This challenge can be overcome by measuring goals or shots per possession rather than per game, provided a reasonable estimate of possessions is available. Recording when the puck is brought across the blue line makes this transformation possible, enabling a true assessment of performance in the offensive or defensive zone. Surprisingly, a season of data shows no clear separation between players in shot production or suppression; if offensive stars generate more shots per offensive zone possession than fourth line grinders, the difference is small enough to not show up in a single season’s data. Instead, the team’s shot differential – which has been shown to be a strong predictor of wins – is determined almost entirely in the much less - heralded neutral zone. Neutral zone success involves more than getting extra zone entries; since carrying the puck across the blue line generates more than twice as many shots, scoring chances, and goals as dumping the puck in, gaining the zone with possession is a major driver of success.

Eric's findings are over a full season of data; on a game-to-game basis, teams won't necessarily generate twice as many shots per controlled offensive-zone entry as they will on dump-ins but, in the long run, players and teams who enter the offensive zone with possession at a higher clip (and/or generate a greater volume of entries than their opponents) tend to have more success. With that in mind, below are the 5-on-5 zone entry results for the Sharks from last night's game.

While the Sharks weren't able to generate a ton of offense from his particular entries, Patrick Marleau had a magnificent game in the neutral zone, never once having to resort to a dump-in on his six entries; that was a significant factor in the amount of time that line spent in the Flyers zone. At the other end of the spectrum, Tommy Wingels' controlled entry percentage wasn't spectacular but he generated more overall entries than any other player and generated an impressive amount of offense the times he did cross the blueline with control. He and two-goal man Raffi Torres were probably the best of the Sharks' bottom-six forwards; ultimately, inserting James Sheppard and Tyler Kennedy into the lineup over Adam Burish and Mike Brown is for the best insofar as the third and fourth lines' two-way effectiveness.

Before a team can hope to enter the offensive zone, it needs to be able to get out of its own end successfully. That's where zone exits, both systemically and as a useful statistic, come in. Defense in hockey has traditionally been judged by physicality and positional play and while those things are undoubtedly important, the ability to minimize time spent in the defensive zone by effectively advancing the puck after recovering it from the opposition is paramount. Just ask Phoenix Coyotes head coach Dave Tippett, who said as much in an interview with the Arizona Republic about his days as a general manager in the defunct IHL:

We had a player that was supposed to be a great, shut-down defenseman. He was supposedly the be-all, end-all of defensemen. But when you did a 10-game analysis of him, you found out he was defending all the time because he can’t move the puck. Then we had another guy, who supposedly couldn’t defend a lick. Well, he was defending only 20 percent of the time because he’s making good plays out of our end. He may not be the strongest defender, but he’s only doing it 20 percent of the time. So the equation works out better the other way. I ended up trading the other defenseman.

He was limited to two assists on the scoreboard but Marleau quietly had a flawless game in every respect. San Jose outchanced Philadelphia 6-1 when he was on the ice at even-strength, largely a product of him always making the right play in the defensive and neutral zones; he exited his own end with possession all four times he touched the puck there and, as mentioned above, went six for six on generating controlled offensive-zone entries.

The play of Matt Irwin and Justin Braun as a pairing was probably the only concerning aspect of last night's game and the zone exit data sheds some light on why they were so bad. They were responsible for 8 of the Sharks' 28 defensive-zone turnovers at even-strength and only Jason Demers was less successful among defensemen on his true attempts to exit the zone. Speaking of Demers, there was something of a role reversal between him and Scott Hannan when it came to advancing the puck last night. Demers is generally tasked with the bulk of the zone exit work on that pairing but faced a ton of forechecking pressure, forcing him to cede that responsibility to Hannan fairly frequently. Shockingly, Hannan did a terrific job at making plays that were certainly low-risk but still found their way onto Sharks forwards' sticks more often than not. I'm unconvinced Brad Stuart could have done the same in that situation.