The Sharks take on the Blue Jackets for their last game for the next 20 days. Make the most of it!

Share All sharing options for: Sharks vs. Blue Jackets Preview

The San Jose Sharks play their last game before the Olympic break against a team that gave them their fair share of problems last season. The Blue Jackets are just a point out of a playoff spot after putting together a strong second half of their season thus far. CHART: 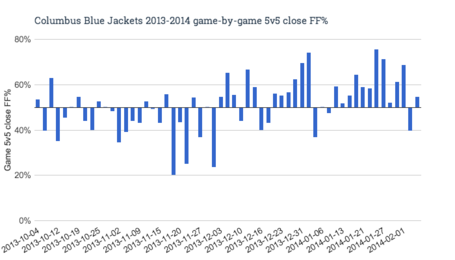 They're fighting for a wild card spot with the Detroit Red Wings and Toronto Maple Leafs, so... they probably have a decent shot of getting into the playoffs if the Leafs combust again or any more Red Wings die and go on the IR. They lost in overtime to the Kings last night (thanks a lot, guys) but they beat the Ducks on the first leg of their California road trip.

Columbus swept the regular-season series against the Sharks in their final season in the western conference. They outscored San Jose 14-5 in their three meetings and despite a late push missed the playoffs on a tie-breaker with the Minnesota Wild. On the bright side, it spared them the fate of being embarrassed by the Blackhawks in the first round. Like every other team moving east, I can't imagine the Jackets are missing the west too much.

The Sharks finally won a game, and even though it took four periods it would be nice to pick up another two points on the quickly-fading Ducks before the Olympic break. There are few teams who need this two-week break as badly as the Sharks. Logan Couture's absence has at times looked at the final injury nail in the we-can't-go-on coffin and getting him back will help right the ship in a lot of ways for the struggling Sharks.

I know I mention the Sharks "slump" above, but to put it in a little perspective remember that the Sharks are still a top-5 possession team despite the numerous injuries they've dealt with this season. In addition to that, they haven't exactly had all the bounces go their way in the past few games. 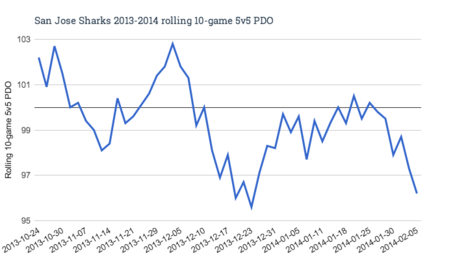 That's a fair amount of below average PDO in their last few games. A reminder that PDO is a combination of a team's shooting percentage and their save percentage. 100 is average, anything about that is (usually) destined to come back down to Earth and anything below that is (usually) bound to pick back up again.

A Sharks win tonight would put them within five points of the division lead heading into the Olympic brea. That sounds pretty nice to me.