By the numbers: Game 61 vs. Buffalo

Share All sharing options for: By the numbers: Game 61 vs. Buffalo 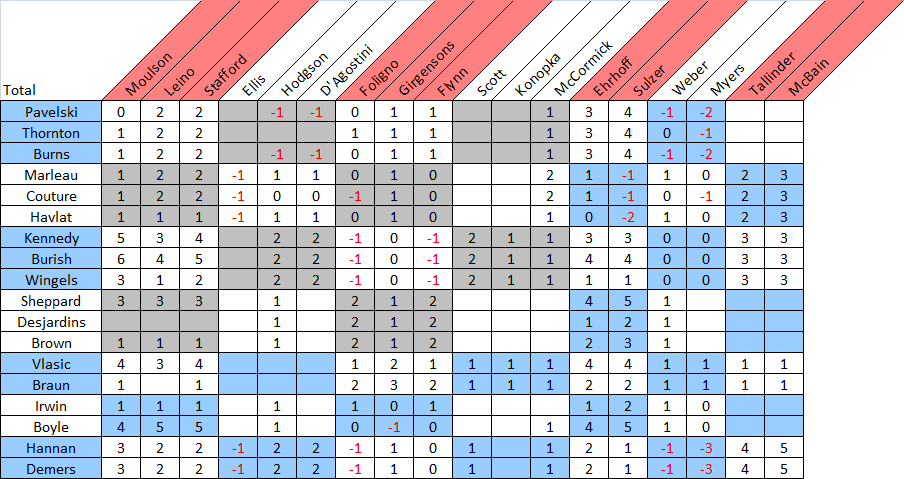 For the second game in a row, the Sharks outchanced their opponent by a lopsided margin in the second period (14-2 against the Flyers, 12-2 last night in Buffalo) but, unfortunately, they weren't shooting on Steve Mason and Ray Emery so only one of those opportunities found the back of the net.

As starkly different as the results in the two games were, the Sharks' play from a scoring chance perspective was fairly comparable and pretty impressive considering they were on the second half of a back-to-back this time around (of course, the quality of competition was considerably weaker as well). Ultimately, Antti Niemi giving up two goals on just six dangerous shots against (and another goal, Cody Hodgson's, from just outside the scoring chance area) was probably the biggest factor in this loss.

Most opinions of Marty Havlat are going to be significantly colored by his frequent injuries and oversized caphit, which is fine, but when he's healthy he really changes the dynamic of this team in the neutral zone. Where other forwards who have been placed on Patrick Marleau and Logan Couture's right wing, like Tommy Wingels and Tyler Kennedy, tend to resort to dump-ins when playing on that line, Havlat isn't afraid to create transition opportunities and has the skill to do so. That makes the Couture line a lot more unpredictable and difficult to defend; they had quite a few odd-man rushes as a unit last night, although a couple of them regrettably ended without a shot on net.

Kennedy and James Sheppard, inserted into the lineup in favor of Torres and Matt Nieto, both generated a ton of offense from their entries and helped the Sharks as a whole out-enter the Sabres by a fairly massive margin. Joes Thornton and Pavelski, on the other hand, had one of their weakest games offensively in a while and it looks like a lot of that was due to less-than-optimal neutral zone play, as well as a line-wide failure to recover dump-ins.

I'm not entirely sure how Vlasic ended up with so many defensive-zone puck touches when he was dead last among Sharks defensemen in even-strength ice time (seriously) but he had an abnormally turnover-prone game; Dan Boyle seemed better off on shifts paired with Matt Irwin rather than Vlasic, which is something we haven't been able to say in a long, long time.

As these numbers show, one area the Thornton line did perform well in last night was their own zone, barely giving up anything to Buffalo when they were on the ice thanks to quick and efficient exit plays, but they weren't able to translate that into success at the other end.