San Jose opens its last Eastern Conference road trip of the season in Ohio, where they'll have the chance to tie the first-place Ducks in standings points with a win over the Blue Jackets.

Thanks to the Calgary Flames' highly-enjoyable 7-2 rout of the Anaheim Ducks last night, the Sharks can move into a tie for first in the Pacific Division (although Anaheim will technically still have a game in hand) with a win of any fashion tonight in Columbus. That's easier said than done, given the Sharks' recent history in Ohio. Last season, they dropped both meetings with the Blue Jackets at Nationwide Arena by a combined score of 10-2 and all indications are that the Jackets are a much-improved team this year.

6-3-1 in their last ten, Columbus currently sits in a playoff spot in the East and, unlike a season ago when they captured the hearts and minds of hockey fans everywhere (or at least this dude) with their late playoff push, they aren't a one-man team anymore. Sergei Bobrovsky has been great but he hasn't had to single-handedly carry the club as he did last year, with their play in front of him greatly improved. Travis Yost compiled a list of every team's performance thus far in the 2014 calendar year by Score-Adjusted Fenwick, a shot differential metric that serves as the best predictor available of future wins: 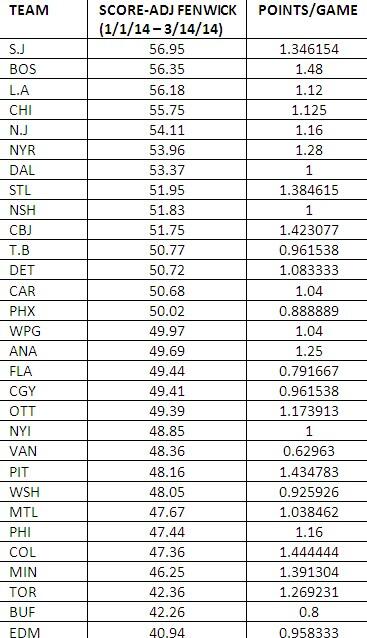 San Jose fares incredibly well by this measure, especially considering they were without Logan Couture (along with Tomas Hertl and Raffi Torres) for a huge chunk of the period being evaluated but the Jackets aren't too shabby themselves; they're tenth in SAF (fourth among Eastern teams) in addition to possessing the fourth-best record in the new year. A lot of their success can be traced to the play of big-ticket free-agent acquisitions James Wisniewski (who deserves Norris consideration, but probably won't get it) and Nathan Horton (the Jackets are 17-7-1 with him in the lineup this season). But particularly noteworthy has been the year Ryan Johansen is having. Drafted 4th overall in 2010, the 21-year-old center is finally starting to come into his own as a star in the NHL. Check out this player usage chart: 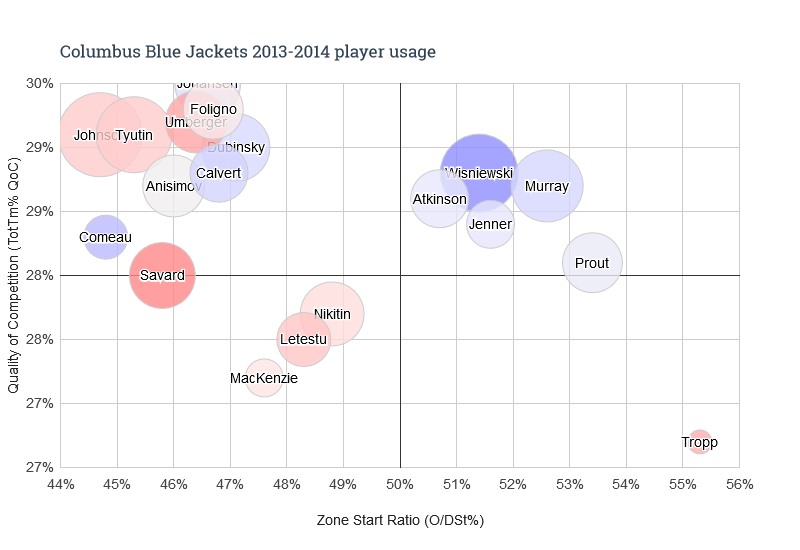 Johansen's place on it in the upper left corner indicates head coach Todd Richards is deploying him against some of the toughest competition in the league and starting him in the defensive zone far more often than the other end of the ice but the color of his bubble reflects the fact that Columbus still outshoots the opposition when he's on the ice. In addition to taking care of business on the defensive side of the puck, Johansen also leads the Jackets in goals and points, with 25 and 49 respectively. After years of being one of the league's weaker teams in terms of drafting and development, the Jackets are finally starting to augment their roster with good young players as 2011 2nd-rounder Boone Jenner and 2012 first-rounder Ryan Murray have also played significant roles in the team's resurgence this season. Murray is out 4-6 weeks after knee surgery but Johansen and Jenner are top offensive weapons the Sharks should definitely be on the lookout for tonight.

Alex Stalock will be starting for San Jose on the front half of a back-to-back (presumably Antti Niemi will get the call tomorrow on Long Island) while Raffi Torres is a game-time decision after missing the team's win over Toronto. On the Columbus side of things, Artem Anisimov is unlikely to play due to the birth of his child while Blake Comeau is serving a two-game suspension for boarding Detroit defenseman Brendan Smith.