By the numbers: Game 67 vs. Columbus

Share All sharing options for: By the numbers: Game 67 vs. Columbus 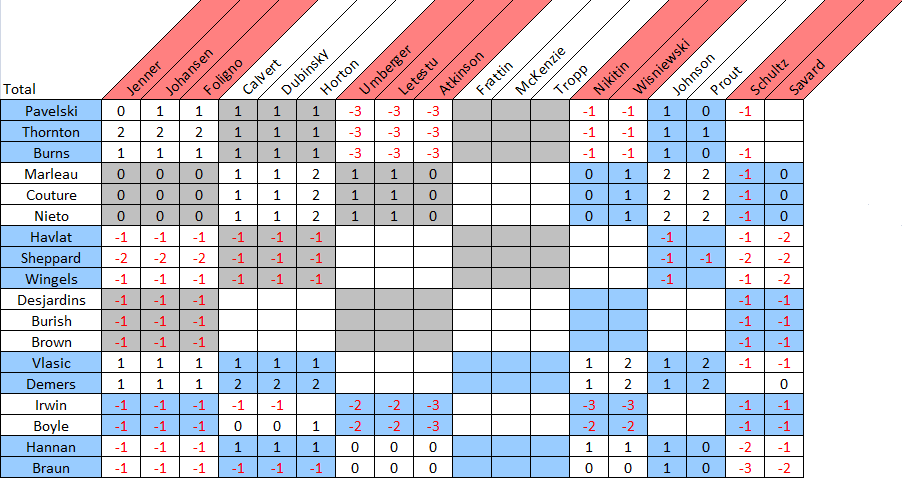 The bottom six, with Matt Irwin and Dan Boyle frequently behind them, were outplayed by their Blue Jackets counterparts and looked more or less hopeless when caught on the ice against some of Columbus' better forwards. That's a big reason the Sharks were outchanced in this game, both at even-strength and overall, as well as a significant factor in their dismal second period showing. Ryan Johansen had a great game for the Jackets, generating five of their 17 chances.

This was a completely bizarre game for the Sharks when it comes to zone entries. They gained the blueline with control far more frequently than they usually do but somehow generated slightly more shots per dump-in than they did per controlled entry. That pretty much never happens for any team in the league and it would be interesting to break down the video further to see if Columbus was simply defending well after ceding the blueline but failing to recover dumped-in pucks or if the Sharks were just having a poor night creating off the rush. At any rate, that quirk and the fact that they allowed 16 more zone entries than they generated are why they were outshot in this game.

Patrick Marleau had a fantastic game in all three zones. His was the best Shark at turning defensive-zone puck touches into clean exits, entered the offensive zone with possession of the puck on all five of his attempts, generated more shots from his controlled entries than any other than Shark save Brent Burns and, oh yeah, scored two goals.