Scoring chances, zone entries, zone exits and more from the Sharks' 4-3 win over the Islanders on Friday night.

Share All sharing options for: By the numbers: Game 68 vs. New York 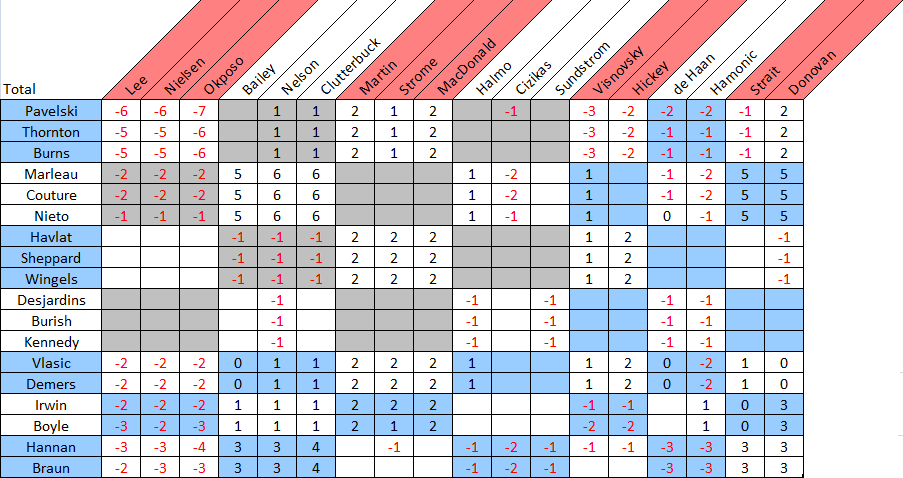 Despite being outshot by a sizable amount, particularly when protecting a two-goal lead for most of the third period, the Sharks ended up outchancing the Islanders overall, mostly on the strength of a terrific performance by the Logan Couture line. The top line, on the other hand, had a difficult night going up against Frans Nielsen's unit for the Islanders, as the head-to-head chart demonstrates.

Chalk it up to their six offensive-zone starts that the James Sheppard line was able to produce offense in this game despite a dreadful neutral zone performance. The three of them combined for just two shots on thirteen offensive-zone entries, only four of which came while retaining possession of the puck. San Jose as a whole struggled more on the defensive side of the puck, allowing the Islanders to generate far more shots off their controlled entries than the Sharks did at the other end of the rink. The bright side is that, as we saw above, not many of those Islanders shots were from dangerous locations.

You can quibble with Tyler Kennedy's decision-making in the offensive zone (his shot selection is, at times, maddening) but he reliably makes the right plays in the other two zones, particularly when it comes to getting the puck moving in the right direction out of his own end. He was the biggest reason that fourth line had a good game last night.