San Jose faces a Rangers team that's improved quite a bit since they were pasted 9-2 by the Sharks in the first week of the season.

Share All sharing options for: Sharks vs. Rangers: First meeting since Hertl Trick

The last game between the Sharks and Rangers produced what remains the highlight of San Jose's season thus far: Tomas Hertl shocking the hockey world (and/or disrespecting it) by scoring four times in just his third NHL game, capping his performance with one of the most remarkable goals in franchise history.

A lot has changed since early October. Hertl has been on long-term injured reserve for nearly four months now while Martin Biron, the goaltender he scored three of his four goals on, called it a career shortly thereafter. But the most significant change is that the Rangers have dramatically improved from early-season doormat to legitimate Stanley Cup contender.

San Jose won that game 9-2 but, in fairness to the Rangers, they were in the midst of a brutal, season-opening west coast road trip that wouldn't see them host a game at Madison Square Garden until October 28th. Since then, under head coach Alain Vigneault, New York's possession game (and, correspondingly, their place in the standings) has skyrocketed: 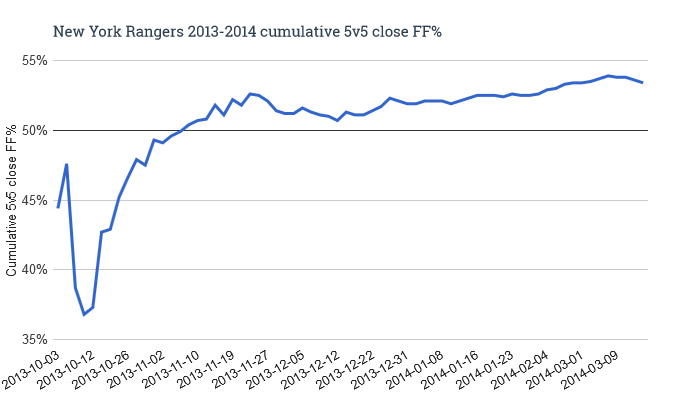 Only four teams in the league (and the Sharks are one of them) have controlled possession to a greater extent this season than the Rangers. And while they've struggled significantly when it comes to putting the puck in the net, the addition of Martin St. Louis at the trade deadline should help in that regard. St. Louis will likely start today's game on the third line, a testament to the forward depth Glen Sather has accrued over the years; this is one of those games where I think it might make sense for the Sharks to have Pavelski center the third line to give San Jose a better shot at winning that matchup, but it seems unlikely he'll be moved off Thornton's wing.

"Potential Stanley Cup Final preview" gets thrown around a lot, and I'd personally have a hard time picking against Patrice Bergeron and Zdeno Chara's ability to shut down the Rangers' top offensive weapons should those two teams meet in the Eastern Final. But it's still a distinct possibility that the next meeting between the Sharks and Rangers will come in June. At any rate, today's matinee will be far and away the toughest test for the Sharks since the Olympic break (yes, moreso than Pittsburgh) and should prove to be a pretty good barometer of where a largely-healthy San Jose team stands in comparison to some of the other contenders. Anaheim's two-game winning streak, which has given the Ducks a two-point lead over the Sharks for first place in the division, also means this is a big two points.